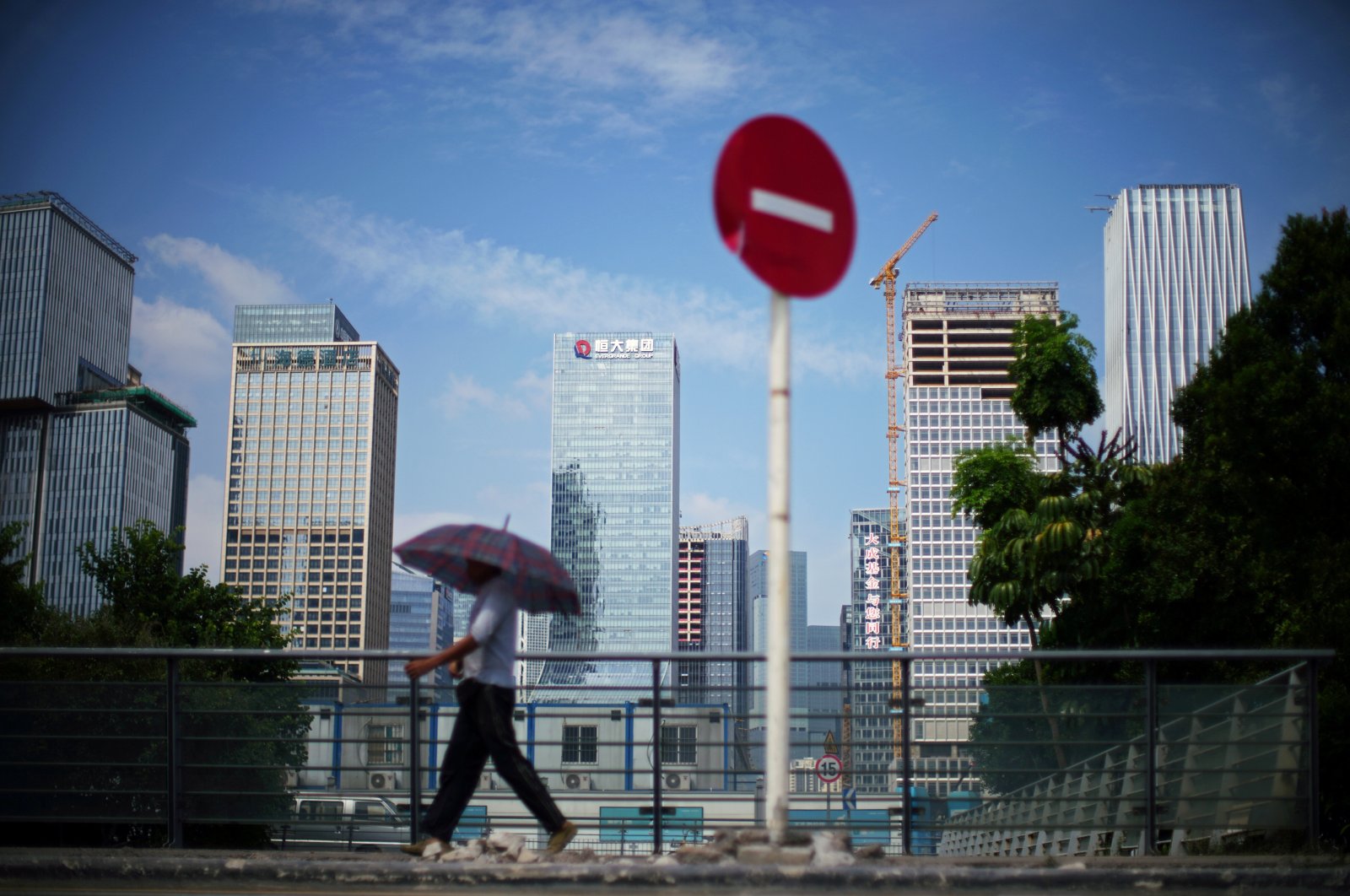 A man walks past a No Entry traffic sign near the headquarters of China Evergrande Group in Shenzhen, Guangdong province, China, Sept. 26, 2021. (Reuters Photo)
by REUTERS Dec 07, 2021 11:09 am
RECOMMENDED

The world’s most indebted real estate developer China Evergrande Group is teetering on the brink again just three months after narrowly avoiding collapse, and investors are still unclear how much or for how long the problems could reverberate.

With over $300 billion of liabilities and more than 1,300 real estate projects, Evergrande has been the poster child of a property crisis in China this year that has already ripped down nearly a dozen smaller developers.

Evergrande could still pay an overdue $82.5 million bond payment which has now reached the end of its grace period, but it has warned it might not.

Some offshore bondholders of Evergrande Group had not received the coupon payments by the end of a 30-day grace period on Monday New York time, four people with knowledge of the matter told Reuters.

A failure to make it could represent Evergrande’s first offshore default on a public bond.

Such a default would trigger cross-defaults on all the company's about $19 billion of bonds in international capital markets and put Evergrande at risk of becoming China's biggest-ever defaulter, which would ripple through the property sector and beyond, further rattling global investor confidence.

Earlier on Tuesday morning, Evergrande saw its stock claw back as much as 8.3%, after losing 20% a day before.

At a time of slowing property sales in China, a disorderly Evergrande default could accelerate financial stress across the property sector, said Logan Wright, director of China markets research for consultant Rhodium Group.

A resolution must account for billions of yuan due to contractors and suppliers.

"Right now there is very little clarity on the potential sources of this financing, even if there is more confidence that authorities will respond with some resolution to limit financial contagion," Wright said.

Having narrowly avoided becoming China's biggest default with 11th-hour payments at the end of a grace period in the last couple of months, Evergrande is once again back on the ledge.

On Monday, the developer said it had established a risk-management committee that included officials from state entities to assist in "mitigating and eliminating the future risks."

That came after it earlier said creditors had demanded $260 million and that it could not guarantee funds to repay debt. That prompted authorities to summon its chairperson and reassure markets that broader risk could be contained.

But unlike a couple of month ago, the fallout has been broadly contained inside China and with policymakers in Beijing becoming more vocal and markets more familiar, the consequences of Evergrande's troubles will be less widely felt, investors say.

Still, she pointed to Friday's central bank statement, and other official statements like it, pledging Evergrande was an individual issue and long-term funding functions would not suffer.

"Contagion happens when you have something where nobody knows who owns what," and events move quickly, she said. Rather, she added, a default by Evergrande would look more like the case of HNA Group, whose restructuring plan was approved by creditors in October.

"I think the systemic risk is very unlikely and regulators have been doing a decent job in making this what they call a ‘limited detonation’," Chen said.

China's central bank has pumped 1.2 trillion yuan ($188 billion) into the banking system, its second such move since July, and the regional government where Evergrande is based has said it is now stepping in.

Within China, the question for sector experts is whether this can prevent yet more contagion.

Since October's dodge, a clutch of Evergrande's smaller rivals have either gone under or restructured. Kaisa, China's first property default back in 2015 which has over $3 billion of debt to refinance next year, is also in serious strife.

"Generally speaking nothing much has changed (since October's Evergrande deadline) but the market mood has changed," said Seaport Global analyst Himanshu Porwal, pointing to the string of smaller defaults.

It was positive that provincial governments wanted to get involved in cases like Evergrande's, he said, but none of the state-owned property firms had taken part in the firm's projects to ease its liquidity crunch.

In the meantime, the damage inside the country continues.

China real estate HY bonds have suffered their worst year on record this year, losing more than a third of their value on average, while Evergrande, Kaisa and defaulters like Fantasia are down at least 80%.

JPMorgan counts a total of 11 defaults this year already and with land sales slumping over 55% year-on-year, and housing sales themselves down 25% in October, more are expected.

It thinks Beijing needs to be more direct with its support.

"To prevent contagion cascading up the credit curve, regulators would need to think about stabilizing both physical demand and financial markets," the firm's head of Asia Corporate Research, Frank Pan, said.

"The concern is that if regulators fail to prevent wide-scale defaults within the sector, we could potentially see more bonds trading at distressed levels," adding that even "better quality" firms could find it harder to refinance.