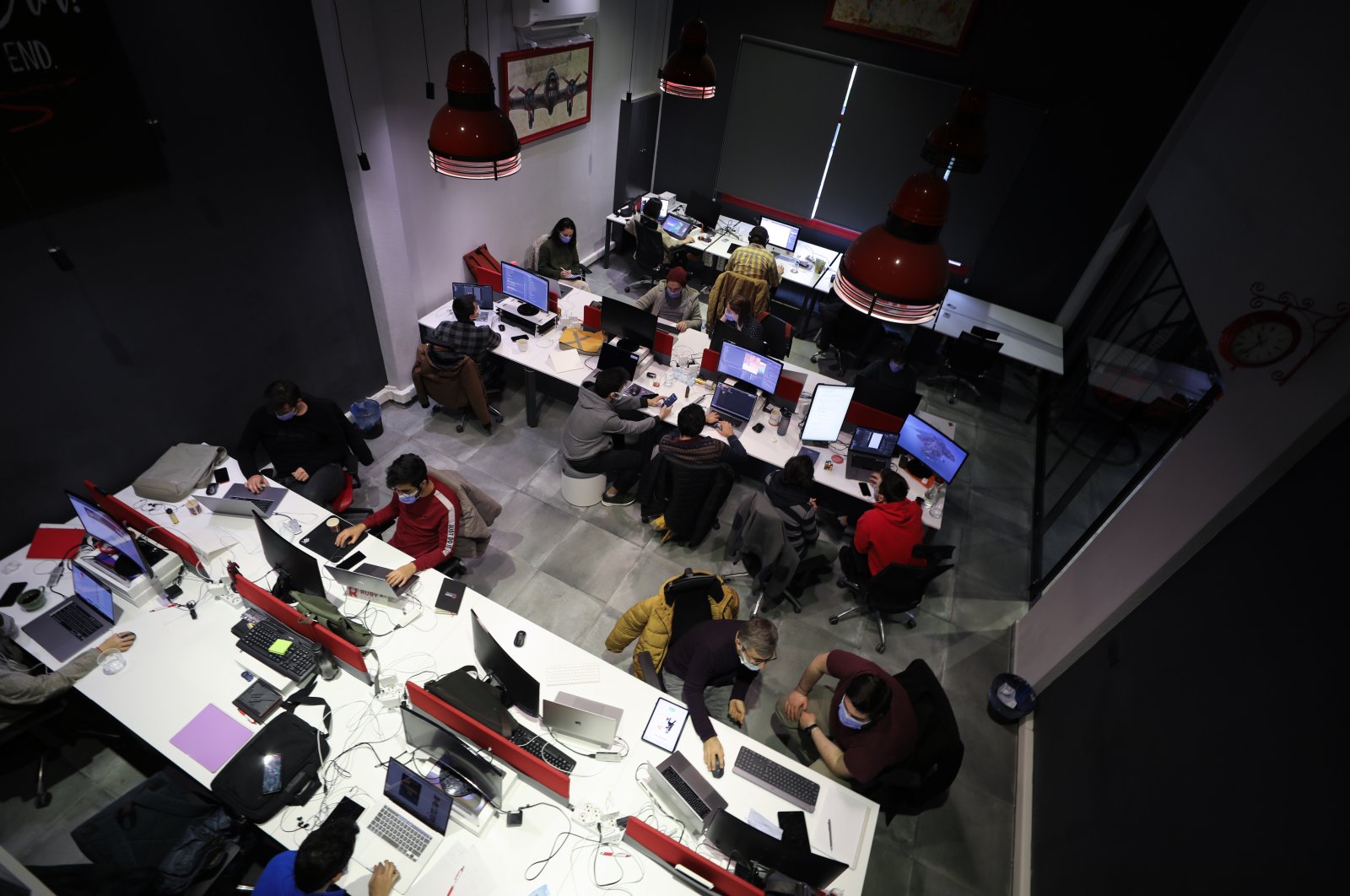 It seems it will not be long before another billion-dollar Turkish gaming startup hits the market following a successful 2020, particularly now that the ventures seem to have no trouble finding investors

Surging enthusiasm has been prompting the birth of different gaming startups in Turkey. The gaming world is growing by the day around the globe as well as Turkey and has encompassed millions, regardless of age, gender or location.

Istanbul-based gaming company Peak’s $1.8 billion (TL14 billion) sale in June last year, in the midst of the coronavirus pandemic, created a stir in the gaming industry. It marked the birth of Turkey’s first unicorn, a startup worth $1 billion.

Will Turkey turn into a gaming factory with new billion-dollar new gaming startups? The answer to this was sought at the recent Ventures60 event, which brought together entrepreneurs, investors and platform companies.

Investors who want to catch up with the next big gaming ventures are more eager than ever before and stand ready to deploy funds. Some of the managers of the Turkish gaming companies that have made successful exits – a sale of a startup – now come to the fore either as investors or as serial entrepreneurs with new games.

Turkish ventures on the lists

Game downloads are one of the most important stats determining the value of a gaming venture. Figures announced by App Annie, a mobile data and analytics platform, put forth interesting results for Turkey.

The game Epic Race 3D, developed by Good Job Games from Turkey, found itself ranked 10th in the list of most-downloaded mobile apps in 2020.

Looking at the top 10 most-downloaded games in March, five or six of the games have been developed in Turkey. The country turned into an important hyper-casual game hub following investments in Peak and another Istanbul-based game maker Rollic.

Mobile game developers nowadays are not facing difficulties in finding investors as they had in the past. According to App Annie figures, most of the studios developing only mobile games are based in Turkey.

Turkey's metropolis Istanbul is one of the biggest centers for mobile game studios. Global acceleration programs are very rich in terms of investors and experienced Turkish entrepreneurs. One of the biggest centers outside of Istanbul is acceleration programs such as ATOM within the Middle East Technical University (METU) Teknokent in the capital Ankara.

ATOM was founded about 12 years ago by gaming entrepreneurs within the university. Apart from Istanbul and Ankara, the number of mobile game developers is gradually increasing in cities such as Izmir, Eskişehir and Denizli.

The global gaming market saw its revenue surge close to 20% in 2020, reaching more than $150 billion.

This period marked two important and proud developments for Turkey as two of its gaming ventures, namely Rollic games and Peak gaming companies, were purchased by the U.S.-based giant Zynga for a total price of over $2 billion. This proved Turkey's potential not only as a player but also as a game maker.

Noteworthy figures come to the fore on Turkey's side when looking at the publisher gaming studios and developers.

The Google Turkey office is also supporting promising startups, game events and the creation of programs.

According to startup monitor startups.watch's figures, Istanbul has become the second-largest city in Europe after London in terms of the gaming studios clusters, Türk noted.

“Most startups specialize in mobile gaming. It is of great importance particularly in terms of the export income of gaming ventures from Turkey. When we look at the developer list of the games downloaded in App Annie figures, we see that 5% of mobile games were developed in gaming studios in Turkey,” Türk said.

“This is a very striking figure, indicating that we have reached an important point in terms of human resources and mobile gaming ventures.”

He also noted that the striking growth in the mobile game side has caught Google’s attention.

“One and a half years ago, we started restructuring startups. We launched acceleration programs to support mobile gaming ventures,” Türk continued. “We cooperate with ATOM on this issue. We want to evaluate the accumulation of mobile gaming in Turkey. We think more games of global potential will emerge from Turkey. We want mobile game developers from Turkey to get more shares from the mobile application economy.”

The current figures will grow even more as the gaming world develops content that appeals to everyone, Türk Telekom Fixed Services Marketing Director Nilay Altan said, evaluating the gaming industry stats in Turkey.

The number of players in Turkey stood at 32 million, Altan noted, citing the Game in Turkey 2020 Industry Report. This figure surged even further during the pandemic period, reaching 36 million in 2020, she added.

“According to 2020 figures, the distribution of players is 35 million mobile, 22 million PC and 17 million console games,” she noted.

Speaking of the age and gender distribution, Altan stressed there used to be a noteworthy gap in the distribution of men and women.

The beginners are regarded as newbies and average gamers as casual gamers, while frequent gamers and game followers are called hardcore gamers, Altan noted.

“Hardcore gamers spend on average five to six hours a day playing games, and according to our research, 16% say they play for 10 hours or more. This is a very serious time, and it is an indication of how passionately the player base is following the games and the gaming world.”

Noting that many habits have been redefined during the pandemic period, Altan revealed that the time allocated to gaming has increased.

The number of esports players also increased by 30%, she noted. “Also, at this time, the number of people playing mobile games at least once a day rose to 65% in Turkey. The number of gaming arenas, which was three in 2019, increased to 19 in 2020. The esports ecosystem now encompasses 5.5 million people. All these figures show how rapidly the gaming industry is developing. Having a high development potential, the industry has grown much faster with the pandemic.”

Ufuk Benli, co-founder and CEO of Brew Games, said the local mobile gaming startup would use the investment it recently received from Actera, one of the Turkey-oriented large private equity companies, to increase the number of employees and improve software automation processes.

Addressing the Ventures60 event, Benli expressed that Turkey has come a long way in mobile game development in the last five years.

He also spoke of their ongoing project. “Artistic abilities are the most important power to differentiate in games. We want to create a new category by accelerating the automation work in the game development process that will make artistic talents stand out,” he said.

“I trust the experience and abilities of my teammates in this regard. We see that the investments made in Turkish game companies continue to increase,” Benli noted. “In addition to offering the games we have developed to the world, we will do our best to attract new talent to our industry.”

Doğukan Yelseli, co-founder and CEO of Funmoth Games and the other co-founder and COO Tolga Öztürk took the stage at Ventures60 event to share the story of the successful gaming studio.

Funmoth Games managed to receive an investment from WePlay Ventures and London-based Matchingham Games at the end of last year, valuing the company at TL 10.5 million.

Yelseli and Öztür both stressed the importance of choosing the right investor for them, stating that failing in their first job motivated them further.

They said that WePlay Ventures being a game-focused fund would help them more in achieving their goals.

London turns into a game scene

Addressing the Ventures60 event, Simay, the founding partner and producer of Recontact Games, emphasized that they had transformed the historical places of Istanbul into a game scene before they stepped into London.

“Although it was delayed due to the current conditions, the game started to be offered and we entered the recommended category in a short time,” she said.

The cinematographic mobile game series that was named by Apple as the best mobile game in Turkey and introduced in the most innovative game category in 153 countries, sets out on a global journey from London in the last section, Simay noted.

“We aim to reach mobile gamers who want to become cyber detectives and try to solve the mystery in London. To provide an innovative experience, we developed five different game dynamics and Photogometric (augmented reality) AR within the cinematographic structure.”