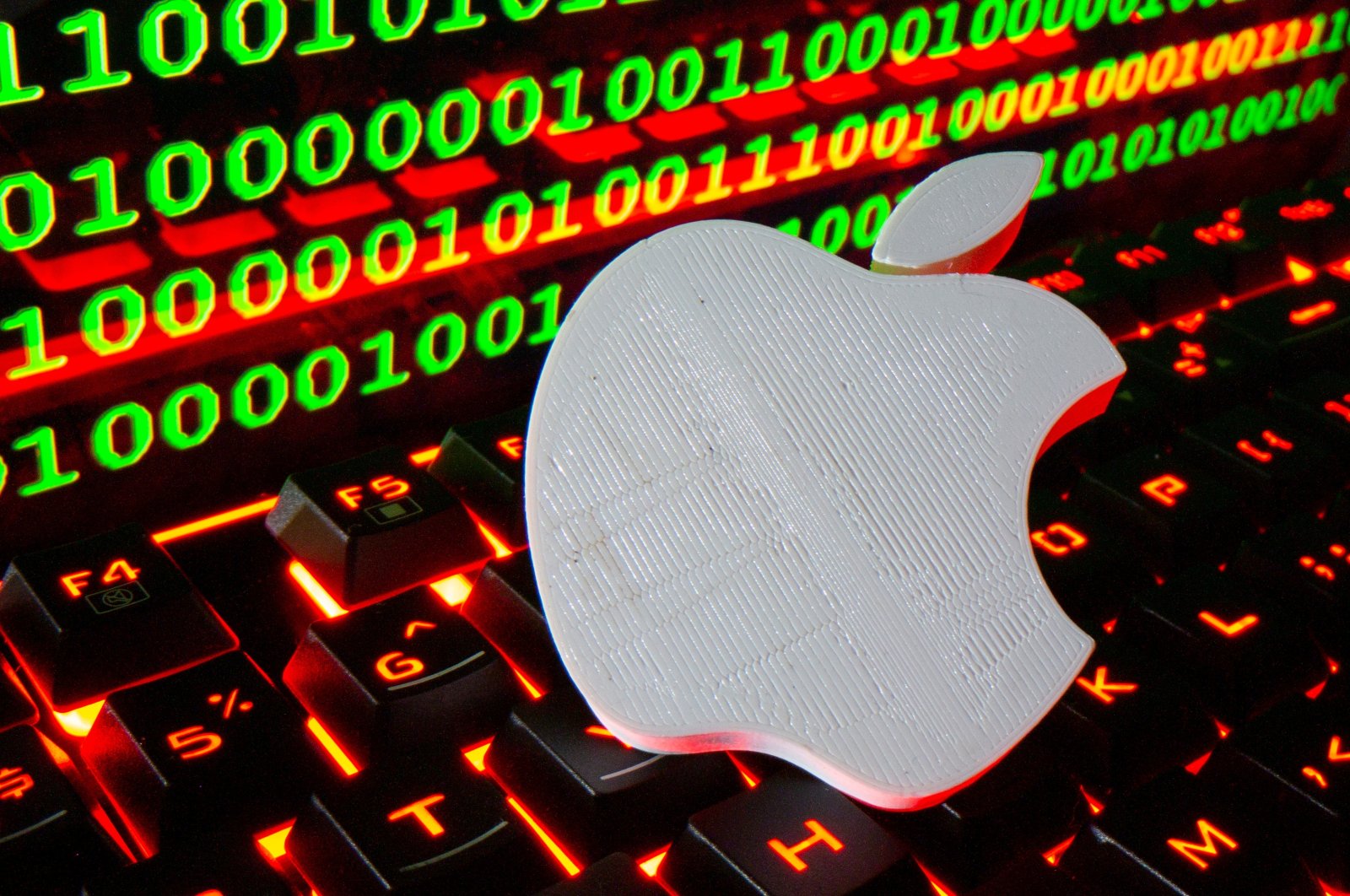 A 3D printed Apple logo is pictured on a keyboard in front of binary code in this illustration taken Sept. 24, 2021. (Reuters Photo)
by DAILY SABAH WITH AGENCIES Oct 15, 2021 7:42 pm
RECOMMENDED

Apple has removed an app that included a digital copy of Muslims' holy book Quran from its app store after a request by the Chinese government, Middle East Eye said in a report late Friday. The app was removed due to content deemed "illegal religious texts" by Chinese authorities.

"PDMS is trying to get in touch with CAC and relevant Chinese authorities, so Quran Majeed app can be restored in China App store, as we have close to a million users in China that have been impacted," Ahmed was quoted as saying.

"As per our understanding, Chinese law requires additional documentation for some apps to be available on the App Store on the Chinese mainland," Ahmed said.

"Apps with book and magazine content must secure an internet publishing permit from China’s National Press and Publication Administration (NPPA)," he added.

Apple's self-censorship comes amid the persecution of the indigenous Muslim Turkic Uyghur peoples living in China's strategic and resource-rich Xinjiang province. The State Department reported in March this year in its human rights report for 2020 that “genocide and crimes against humanity occurred during the year against the predominantly Muslim Uyghurs and other ethnic and religious minority groups in Xinjiang.”

The report highlighted crimes such as the arbitrary imprisonment of more than 1 million civilians, forced sterilization, rape, torture, forced labor and “draconian restrictions” on freedom of religion, freedom of expression and freedom of movement.

Although Beijing has acknowledged the existence of the camps in Xinjiang, it asserted that they are vocational skills training centers necessary to tackle “extremism.” Western countries are increasingly opposed to Beijing's treatment of the Uyghurs amid growing tensions between the United States and its allies and China.

In addition to the "more than 1 million" Uyghurs and other Muslim ethnic minority groups it said were in extrajudicial internment camps, the report said there were "an additional 2 million subjected to daytime-only 're-education' training," a new reference not included in the previous year's report.

Another report shows that China is deliberately pursuing birth control policies to cause a reduction of 2.6 million to 4.5 million births among Muslim Uyghurs and other ethnic minorities in southern Xinjiang within 20 years, representing up to a third of the estimated minority in the region, according to a new analysis by German researcher Adrian Zenz.

The German report also includes a previously unreported cache of research produced by Chinese academics and officials on Beijing’s intent behind the birth control policies in Xinjiang, where official data shows birth rates have already dropped by 48.7% between 2017 and 2019.

And a recent Amnesty International report in June this year said that China has created a “dystopian hellscape” in the western region of Xinjiang, where Muslim ethnic minorities have become the target of systematic and state-organized “mass internment and torture tantamount to crimes against humanity,” citing testimonies of dozens of victims and eyewitnesses.

The Amnesty report, based on testimonies of more than 50 former camp detainees, accuses Chinese authorities of forcing Uyghurs and other Muslim ethnic groups to abandon Islam, their traditions, language and culture, confirming previous allegations of genocide committed within detention centers across Xinjiang. The 160-page report highlighted systematic torture and ill-treatment in the camps.