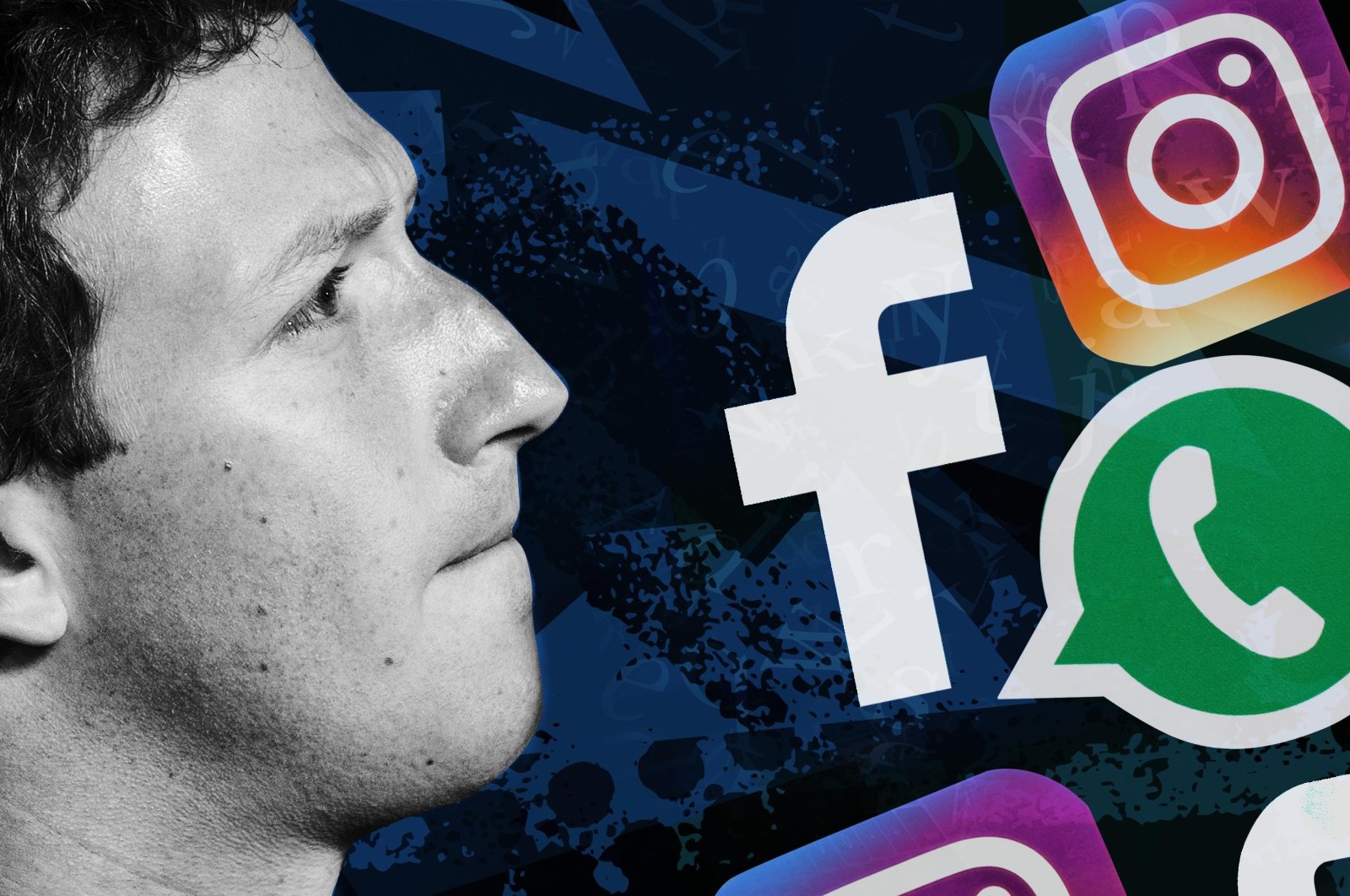 The logos of Facebook, Instagram and WhatsApp and the silhouette of Facebook CEO Mark Zuckerberg are seen in this illustration by Daily Sabah’s Buşra Öztürk.
by DAILY SABAH WITH AGENCIES
Oct 05, 2021 8:30 am

Services, businesses and billions of people who rely on Facebook and its platforms were plunged into chaos Monday amid a massive outage that kept the $920 billion company dark on two-dimensional screens for hours.

The Facebook and Instagram social networks, plus messaging service WhatsApp, were blacked out for nearly six hours. The company said that “the root cause of this outage was a faulty configuration change” and that there is “no evidence that user data was compromised as a result” of the outage.

The company apologized and said it is working to understand more about the cause, which began around 11:40 a.m. Eastern Time Monday.

The Facebook outage is the largest ever tracked by web monitoring group Downdetector.

It was the second blow to the social media giant in as many days as it was already in the throes of a separate major crisis after whistleblower Frances Haugen, a former Facebook product manager, provided The Wall Street Journal with internal documents that exposed the company’s awareness of the harm caused by its products and decisions.

Haugen went public on CBS’s “60 Minutes” program Sunday and is scheduled to testify before a Senate subcommittee Tuesday.

Haugen had also anonymously filed complaints with federal law enforcement alleging Facebook’s own research shows how it magnifies hate and misinformation and leads to increased polarization. It also showed that the company was aware that Instagram can harm teenage girls’ mental health.

The Journal’s stories, called “The Facebook Files,” painted a picture of a company focused on growth and its own interests over the public good. Facebook has tried to play down their impact. Nick Clegg, the company’s vice president of policy and public affairs, wrote to Facebook employees in a memo Friday that “social media has had a big impact on society in recent years, and Facebook is often a place where much of this debate plays out.”

The outage didn't exactly bolster Facebook's argument that its size and clout provide important benefits for the world. London-based internet monitoring firm Netblocks noted that the company's plans to integrate the technology behind its platforms – announced in 2019 – had raised concerns about the risks of such a move. While such centralization “gives the company a unified view of users’ internet usage habits,” Netblocks said, it also makes the services vulnerable to single points of failure.

“This is epic,” said Doug Madory, director of internet analysis for Kentik Inc., a network monitoring and intelligence company. The last major internet outage, which knocked many of the world’s top websites offline in June, lasted less than an hour. The stricken content-delivery company in that case, Fastly, blamed a software bug triggered by a customer who changed a setting.

“To every small and large business, family, and individual who depends on us, I’m sorry,” Facebook Chief Technology Officer Mike Schroepfer tweeted, adding that it “may take some time to get to 100%.”

In Monday night's statement, Facebook blamed changes on routers that coordinate network traffic between data centers. The company said the changes interrupted the communication, which had “a cascading effect on the way our data centers communicate, bringing our services to a halt.”

There was no evidence as of Monday afternoon that malicious activity was involved. Matthew Prince, CEO of the internet infrastructure provider Cloudflare, tweeted that “nothing we’re seeing related to the Facebook services outage suggests it was an attack.”

Facebook did not respond to messages for comment about the attack or the possibility of malicious activity.

While much of Facebook's workforce is still working remotely, there were reports that employees at work on the company's Menlo Park, California, campus had trouble entering buildings because the outage had rendered their security badges useless.

But the impact was far worse for multitudes of Facebook's nearly 3 billion users, showing just how much the world has come to rely on it and its properties – to run businesses, connect with online communities, log on to multiple other websites and even order food.

As the world flocked to competing apps such as Twitter and TikTok, shares of Facebook fell nearly 5%, their biggest daily drop since last November, amid a broader selloff in technology stocks Monday. Shares rose about half a percent in after-hours trade following the resumption of service.

The drop cost its co-founder and CEO Mark Zuckerberg as much as $7 billion in personal wealth, knocking him down a notch in the rankings of the world’s richest people.

According to Forbes’ real-time billionaires list, the fall had moved Zuckerberg from rank five to six on the publication’s list of the world’s wealthiest people with a new worth of around $116.8 billion

It also showed that despite the presence of Twitter, Telegram, Signal, TikTok, Snapchat and a bevy of other platforms, nothing can easily replace the social network that over the past 17 years has effectively evolved into critical infrastructure. The outage came the same day Facebook asked a federal judge that a revised antitrust complaint against it by the Federal Trade Commission be dismissed because it faces vigorous competition from other services.

There are certainly other online services for posting selfies, connecting with fans or reaching out to elected officials, but those who rely on Facebook to run their business or communicate with friends and family in far-flung places saw this as little consolation.

Twitter on Monday reported higher-than-normal usage, which led to some issues in people accessing posts and direct messages.

In one of the day’s most popular tweets, video streaming company Netflix shared a meme from its new hit show “Squid Game” captioned “When Instagram & Facebook are down,” that showed a person labeled “Twitter” holding up a character on the verge of falling labeled “everyone.”

Inside a Facebook group for ad buyers, one member wisecracked after service returned that “lots of people searched today ‘how to run google ads for clients.’”

Facebook, which is the world’s largest seller of online ads after Google, was losing about $545,000 in U.S. ad revenue per hour during the outage, according to estimates from ad measurement firm Standard Media Index.

Kendall Ross, owner of a knitwear brand called Knit That in Oklahoma City, said he has 32,000 followers on his Instagram business page @id.knit.that. Almost all of his website traffic comes directly from Instagram. He posted a product photo about an hour before Instagram went out. He said he tends to sell about two hand-knit pieces after posting a product photo for about $300 to $400.

“The outage today is frustrating financially,” he said and added, “It’s also a huge awakening that social media controls so much of my success in business.”

So many people are reliant on Facebook, WhatsApp or Instagram as primary modes of communication that losing access for so long can make them vulnerable to criminals taking advantage of the outage, said Rachel Tobac, a hacker and CEO of SocialProof Security.

“They don’t know how to contact the people in their lives without it,” she said. “They’re more susceptible to social engineering because they’re so desperate to communicate,” she added. Tobac said during previous outages, some people have received emails promising to restore their social media account by clicking on a malicious link that can expose their personal data.

Jake Williams, chief technical officer of the cybersecurity firm BreachQuest, said that while foul play cannot be completely ruled out, chances were good that the outage is “an operational issue” caused by human error.

“What it boils down to: running a LARGE, even by internet standards, distributed system is very hard, even for the very best,” tweeted Columbia University computer scientist Steven Bellovin.

Twitter, meanwhile, chimed in from the company’s main account on its service, posting “hello literally everyone” as jokes and memes about the Facebook outage flooded the platform. Later, as an unverified screenshot suggesting that the facebook.com address was for sale circulated, Twitter CEO Jack Dorsey tweeted, “how much?”