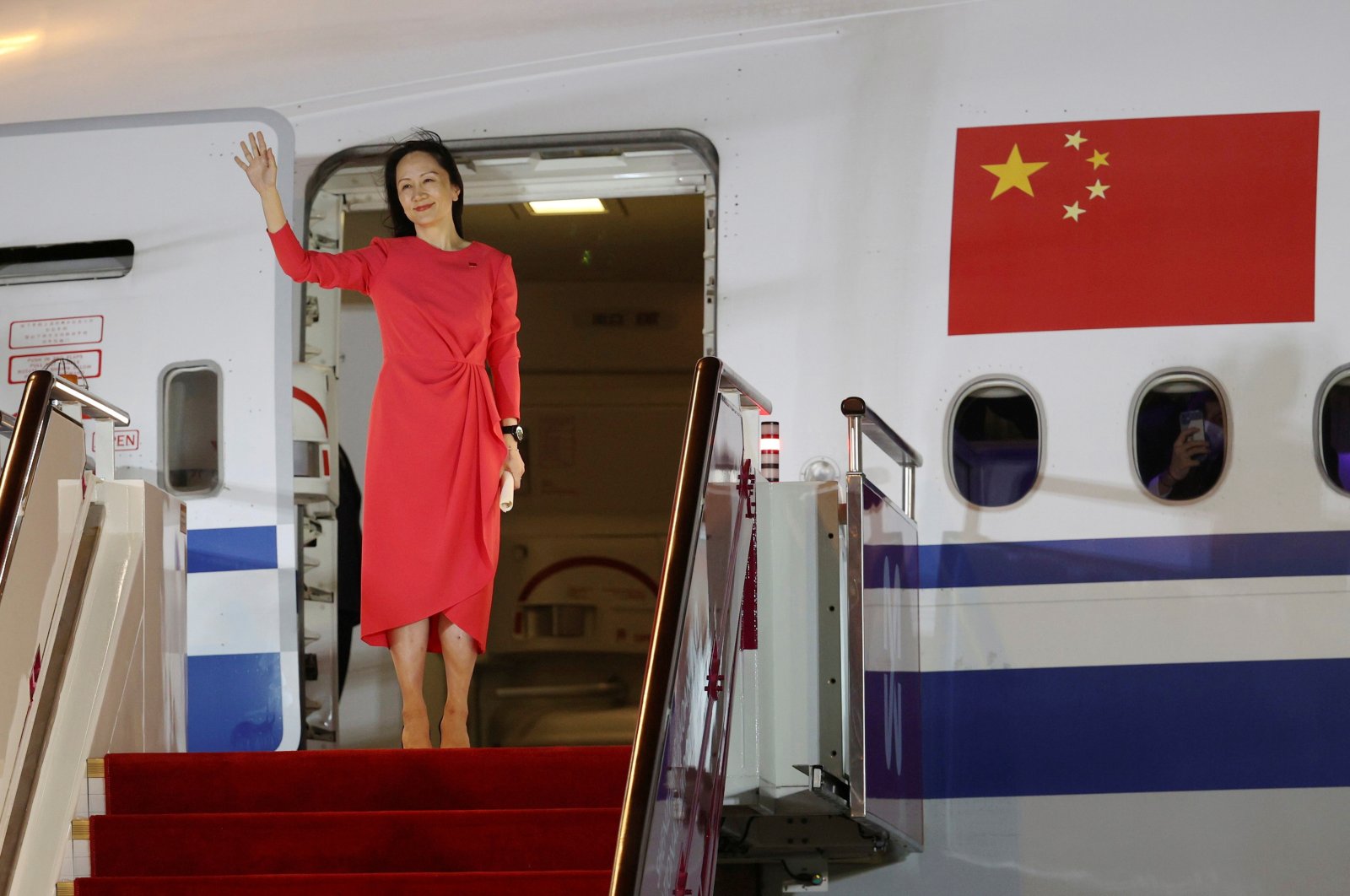 Meng, the daughter of Huawei Technologies founder Ren Zhengfei, was allowed to go home after reaching an agreement with U.S. prosecutors on Friday to end a bank fraud case against her.

The extradition drama has been a central source of discord between Beijing and Washington, with Chinese officials signaling that the case had to be dropped to help end a diplomatic stalemate.

Two Canadians detained by Chinese authorities just days after Meng's arrest – Michael Kovrig and Michael Spavor – were embraced on the tarmac by Canadian Prime Minister Justin Trudeau after they landed in Calgary.

"You've shown incredible strength, resilience, and perseverance," Trudeau said in a Twitter post with photos of him welcoming them home. "Know that Canadians across the country will continue to be here for you, just as they have been."

Welcome home, Michael Kovrig and Michael Spavor. You’ve shown incredible strength, resilience, and perseverance. Know that Canadians across the country will continue to be here for you, just as they have been. pic.twitter.com/1UoLbBFGNv

In the southern Chinese city of Shenzhen, Meng wore a patriotic red-colored dress as she exited a plane to be greeted by well-wishers.

"I'm finally back home," Meng was quoted as saying by the Global Times tabloid backed by the ruling Communist Party. "The waiting in a foreign country was full of suffering. I was speechless the moment my feet touched Chinese soil."

Chinese state media welcomed Meng back but were silent about Kovrig and Spavor, who were released hours after Meng on Friday.

Huawei said in a statement that it "looked forward to seeing Ms. Meng returning home safely to be reunited with her family." It said it would continue to defend itself against U.S. charges.

The agreement opened U.S. President Joe Biden to criticism from Washington's China hawks who argue his administration is capitulating to China and one of its top companies at the center of a global technology rivalry between the two countries.

Some Republican senators swiftly condemned Meng's release and urged the White House to address the U.S. Congress on the issue.

"The release of Ms. Meng raises serious questions about President Biden's ability and willingness to confront the threat posed by Huawei and the Chinese Communist Party," said Marco Rubio in a text message to Reuters.

Senator Jim Risch said in a statement that the deal was "a victory for one of the world's most brutal and cruel regimes," and would embolden the Communist Party "to use other foreign citizens as bargaining chips because it now knows hostage taking is a successful way to get what it wants."

"By agreeing to let Meng return to China, the Biden administration is signaling that it hopes to clear the mess left behind by the former Trump administration," said Wu Xinbo, dean of the Institute of International Studies at Fudan University.

Chinese state broadcaster CCTV carried a statement by Meng, written as her plane flew over the North Pole, avoiding U.S. airspace. Meng said her eyes were "blurring with tears" as she approached "the embrace of the great motherland."

Meng was detained in December 2018 in Vancouver after a New York court issued an arrest warrant, saying she tried to cover up attempts by Huawei-linked companies to sell equipment to Iran in breach of U.S. sanctions.

Chinese foreign ministry spokeswoman Hua Chunying said the charges against her had been "fabricated" in order to suppress the country's high-tech industries.

At the airport in Shenzhen, Meng's hometown, a crowd of well-wishers chanted patriotic slogans and held aloft red banners to welcome her return.

"The fact that Meng Wanzhou can be declared not guilty and released is a huge victory in politics and diplomacy for people in China," said Liu Dan, who was among the crowd.

Hu Xijin, editor in chief of the Global Times, wrote on Twitter that "international relations have fallen into chaos" as a result of Meng's "painful three years."

He added, "No arbitrary detention of Chinese people is allowed."

However, neither Hu nor other local media have mentioned the release of Spavor and Kovrig, and reactions on China's Twitter-like Weibo social media platform have been few and far between.

China has previously denied engaging in "hostage diplomacy," insisting that the arrest and detention of the Canadians was not tied in any way to the proceedings against Meng.

Spavor was accused of supplying photographs of military equipment to Kovrig and sentenced to 11 years in jail in August. Kovrig had still been awaiting sentencing.