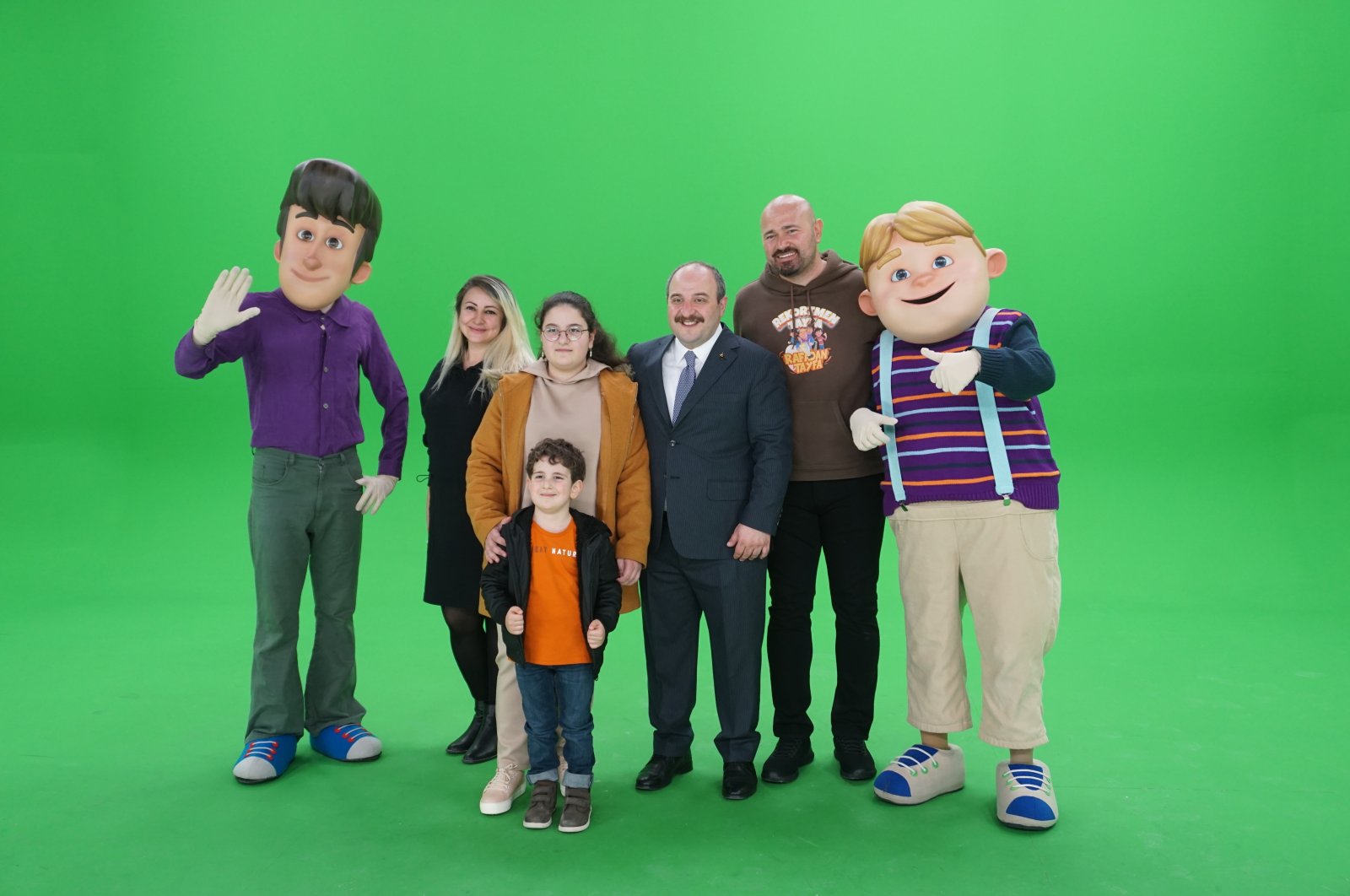 Turkey's success in the cinema and TV series sector has experienced a breakthrough as more and more films and series produced in Turkey are exported abroad, creating an important source of income, Industry and Technology Minister Mustafa Varank said. He also noted that the country has also made great strides in the animation industry and that this area will continue to be supported.

Varank’s remarks came following his visit to ISF Studios, where the production of the animated series "Rafadan Tayfa," broadcast on TRT Çocuk, is carried out.

The minister was accompanied by his children during the visit hosted by Ismail Fidan, the producer and director of the cartoon series.

Pointing to the importance of the animation sector, Varank told Anadolu Agency (AA) that Turkey has been increasing its abilities in the sector by the day. “'Rafadan Tayfa' has become a global brand and is being watched all over the world,” he said.

Stating that ISF Studios is a design center registered by the ministry, Varank said that during the visit they discussed ways to maintain relations in the coming period.

The studio now aims to produce a new animated movie about space in the near future, Varank said, adding that they plan to break the Turkish box office record.

In January, “Rafadan Tayfa 2: Göbeklitepe," the second movie based on the fan-favorite TV cartoon "Rafadan Tayfa," broke an early box office record in the animation genre. The production has become the most-watched Turkish animation, reaching 2.2 million viewers in its third week in theaters.

TRT Çocuk's popular cartoon series "Rafadan Tayfa" was adapted to film with "Rafadan Tayfa: Dehliz Macerası" ("Rafadan Tayfa: A Passage to Adventure") in 2018. Produced by ISF Studios, the movie was seen by 1.8 million viewers in 2018 in 31 weeks. The sequel to the movie, "Rafadan Tayfa 2: Göbeklitepe," hit the big screen in 2019. The sequel is about the mysterious adventures of the group of children called Rafadan Tayfa in Göbeklitepe in southeastern Turkey's Şanlıurfa province. Written by Ozan Çivit, the film is the first animation focusing on this prehistoric marvel. The soundtrack of the production was composed by Tarkan Ergün, and the voices for the characters were done by Şirin Giobbi, Levent Kol, Yağmur Sergen, Hakan Coşar, Emine Sergen Kazbek, Aysın Işımer, Altay Çapan, Serdar Özap, Alp Pazarlı, Oytun Pazarlı and Ahmet Nasıroğlu.

Meanwhile, stressing that ISF Studio's technological infrastructure was established with a visionary approach, Varank noted that they hope to see Turkey further develop in the sector, particularly with the participation of the country's young and dynamic population.

He said that they attach great importance to the youth establishing their own initiatives and that they have discussed setting up an entrepreneurial center with ISF Studios that will operate as a training center for youth to improve their abilities.

Varank noted that they will continue to support this infrastructure through the development agency and the Small and Medium Enterprises Development Organization (KOSGEB) of Turkey in the coming period.

“We want successful enterprises to emerge from there,” he added.