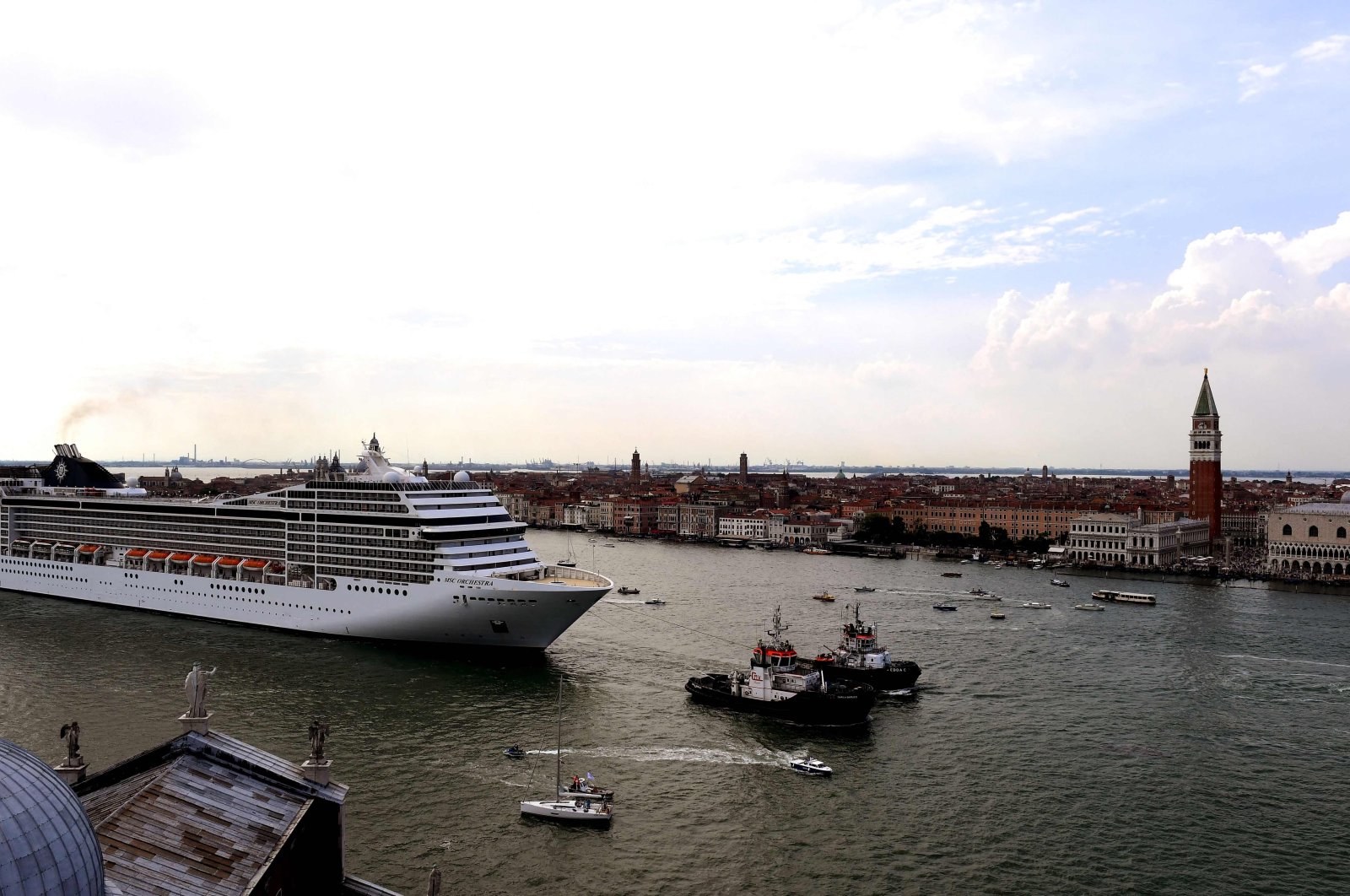 Tugboats escort the MSC Orchestra cruise ship across the basin past the Bell Tower and the Doge's Palace as it leaves Venice, Italy, June 5, 2021. (AFP Photo)
by ASSOCIATED PRESS Jun 06, 2021 12:55 pm
RECOMMENDED

The first cruise ship since the start of the pandemic wended its way Saturday through the heart of Venice, escorted by triumphant water-spouting tugboats and elated port workers as it traveled down the Giudecca Canal. It was not all smiles, however, as the ship drew the ire of some local residents and was greeted by a small armada of wooden boats waving “No Big Boats” flags.

The battle for Venice’s future was stark as the MSC Orchestra set sail with some 1,000 passengers. The voyage heralded the return of cruise ships to the historic city of canals after more than 18 months, but the vessel reignited an anti-cruise movement that for more than a decade has opposed the passage of the enormous ships through the fragile lagoon due to environmental and safety concerns.

Italian Premier Mario Draghi’s government pledged this spring to get cruise ships out of the Venice lagoon, but reaching that goal will take time. Even an interim solution rerouting larger ships away from the Giudecca Canal is not likely before next year. Ridding the lagoon of the ships, which run more than 250 meters (820 feet) in length and weigh over 90,000 tons, could take years.

Venice has become one of the world’s most important cruise destinations over the last two decades, and in 2019 served as a lucrative turnaround point for 667 cruise ships embarking nearly 700,000 passengers and carrying a total of 1.6 million, according to the association Cruise Lines International (CLIA).

Passengers arriving Saturday for the weeklong cruise aboard the 92,409-ton, 16-deck MSC Orchestra, with stops in southern Italy, two Greek islands and Dubrovnik, Croatia, were greeted at the port with signs reading “Welcome Back Cruises.”

Antonella Frigo from nearby Vicenza had her departure date delayed multiple times due to the pandemic and was excited to finally be leaving on vacation. But she also sympathized with activists who want the huge ships moved out of the center of Venice.

“I have always said that they should be moved, but I’m sorry, I need to depart from Venice, since I am from nearby,’’ Frigo said after being was dropped off with a companion at the cruise terminal. “But I hope they can be rerouted. I ask myself, ‘Is it not possible to come up with another solution, so they don’t pass where they shouldn’t?'”

The message for passengers taking in Venice from the ship's decks was mixed as the ship navigated the Giudecca Canal, past St. Mark's Square and the Doges Palace. Hundreds of Venetians gathered at a noisy canal-side protest to demand an immediate halt to cruise ships moving through the lagoon, citing a series of past decrees they say were never enforced.

The MSC Orchestra responded with noisy blasts of its horn, while two dozen boats filled with port employees and VIPs motored alongside, celebrating the renewal of cruises and the return to work for hundreds of port workers. According to the Venice Works Committee, more than 1,700 workers deal directly with cruise ships, from tug boat drivers to baggage carriers, while another 4,000 jobs depend on cruise traffic.

The long battle over cruise ships in Venice ramped up after the Costa Concordia cruise ship sank off Tuscany in 2012, killing 32 passengers and crew members. And it sharpened after the MSC Opera struck a dock and a tourist boat, injuring five people, while maneuvering through the Giudecca Canal two years ago this week.

In all those years, no viable alternative has ever gotten off the drawing board.

The Venice Environmental Association, one of the groups against the ships, is demanding that Italian cultural and Venice port officials immediately ban ships from the lagoon, threatening legal action if there is no action within 15 days.

“It is a great provocation that a ship has passed,’’ Andreina Zitelli, an environmental expert and member of the association, said. “You cannot compare the defense of the city with the defense of jobs in the interest of big cruise companies.”

“We don’t want to be a corporate villain,’’ said Francesco Galietti of Cruise Lines International Italy. “We don’t feel we should be treated as such. We feel we are good to the communities.”

Galietti said cruise ships account for only a small percentage of the tourism to Venice, somewhere around 5%, and that many passengers stay in the city before or after their cruises, contributing an average of $200 a day to the tourism-dependent economy.

Prior to the pandemic, Venice struggled with over-tourism, receiving 25 million visitors a year. It was about to impose a tax on day-trippers before the pandemic struck, bringing tourism to an abrupt halt.

In Rome, the Italian government said it is organizing bids for a viable alternative outside the lagoon, and the request for proposals should be posted any day now. Still, even an interim alternative route to the Giudecca Canal – moving larger ships to an industrial port west of Venice – will not be ready until next year, Italy’s Ministry for Infrastructure and Sustainable Mobility told The Associated Press (AP).

Preparing the port of Marghera, which is still within the lagoon, requires lengthening existing piers to accommodate larger vessels as well as dredging a canal on the approach, cruise industry officials say. Under current plans, ships over 250 meters, representing about 70% of cruise traffic, would be rerouted.

While some cruise companies have experimented with Trieste to the east or Ravenna to the south as drop-off points for those visiting Venice during the pandemic, industry officials say the lagoon city with 1,600 years of history remains a key port of call for cruises in the Adriatic Sea and the eastern Mediterranean.

But environmentalists say the cruise industry must change.

“Venice is at water level. There are days when Venice is below water level," said Jane da Mosto, executive director of We Are Here Venice who was also representing the Global Cruise Activist Network. "We need ships that use renewable energy. We need ships that don’t bring thousands of people into our narrow alleyways at one time. We need visitors that are interested in learning about Venice.’’