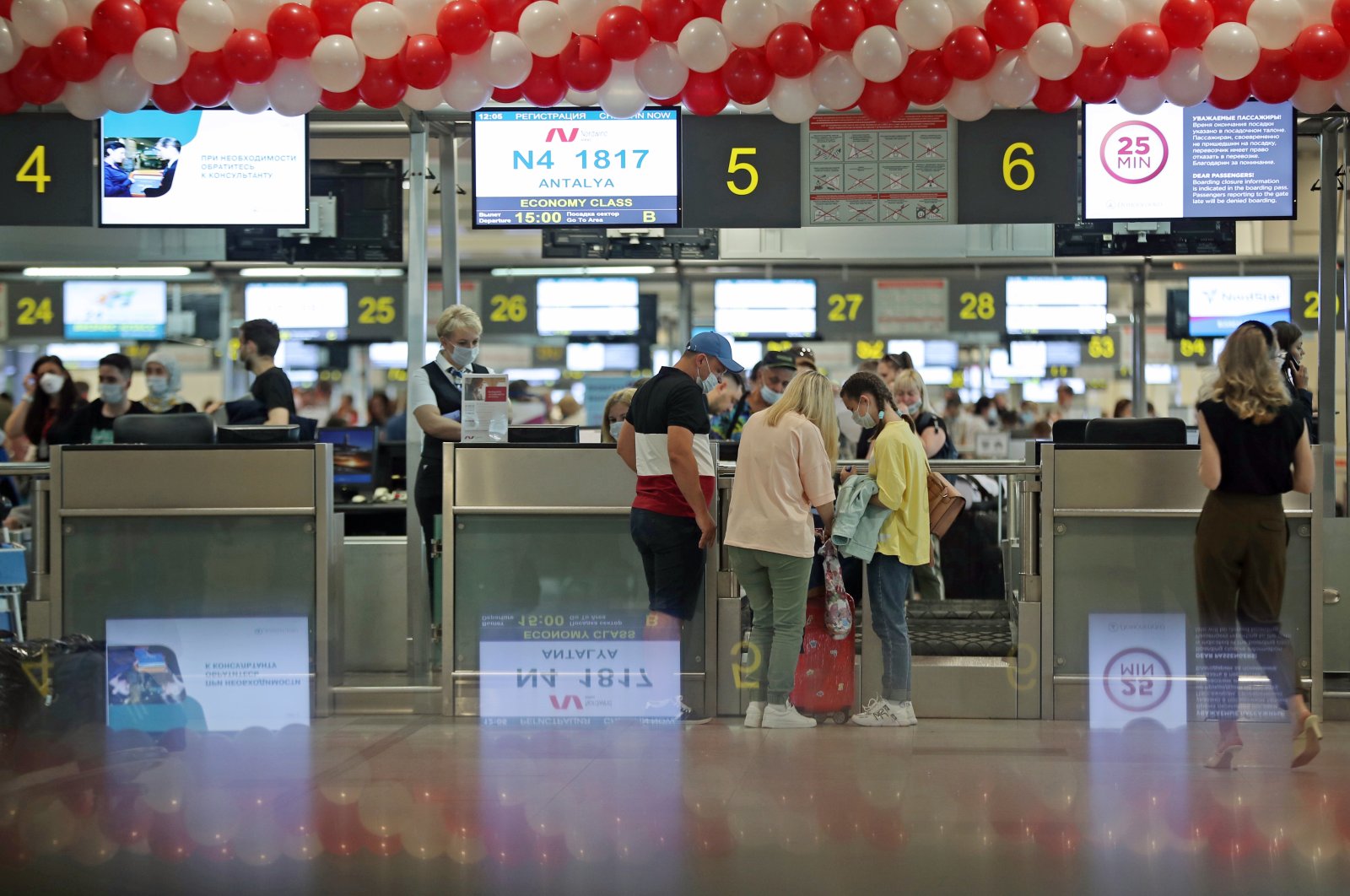 Passengers at Domodedovo International Airport, which has resumed flights to Turkey's resort cities of Antalya, Bodrum, and Dalaman after a pause, Moscow, Russia, Aug.10, 2020. (GettyImages)
by Daily Sabah with AA May 20, 2021 3:09 pm
RECOMMENDED

A decline in the number of new COVID-19 cases in Turkey, as was expected from the strictest lockdown to date, provided a major lift to the local tourism sector’s morale as they anticipate a higher number of vacationers for the upcoming summer season.

Tacettin Özden, the vice-chairperson of the Federation of Hoteliers of Turkey, told Anadolu Agency (AA) that the hotels are ready for the new season armed with the experience of fighting the outbreak that they gained last year.

Stating that they started to host tourists from Poland, Ukraine, Bulgaria and Romania this season, Özden said that these are leading markets for now given the stagnation in other European countries currently.

Everyone should fight together to reduce the number of cases, Özden said, and if we are able to reach the target to bring the daily new case number below 5,000 as determined by President Recep Tayyip Erdoğan, European countries will remove Turkey from their travel restricted countries lists.

Regarding Russia, one of Turkey’s most important markets for tourism, the number of tourists coming from the country to the Turkish Mediterranean resort town of Antalya doubled from a year ago despite Moscow’s decision last month to halt flights.

Antalya welcomed some 445,671 foreign visitors from January through April this year, and tourists from Russia alone accounted for some 296,131 of the overall figure, Antalya Provincial Directorate of Culture and Tourism data compiled on Wednesday showed.

Millions of Russian tourists travel to Turkey each year, and Moscow’s decision last month to halt flights from April 15 until June 1, citing growing COVID-19 cases, dealt a blow to the tourism industry.

Stating that they have observed that those who want to take a vacation do not have any concerns about coming to Turkey, Özden further continued that they are currently in contact with vacationers who previously came to the country and stayed in their hotels.

There are reservations from those who came here before, he said, along with those who did not come last year and who transferred their reservations to this year.

There is pent-up demand, Özden noted, however many people are waiting until the last minute to make reservations since everything can change in an instant with new restrictions and measures decisions imposed by governments worldwide.

"If the number of cases decreases, we think that the season will recover towards the middle of June and it will be a better season than 2020.”

The Ministry of Tourism has a target of $20 billion (TL 167.34 billion) in tourism income and hopes to host 30 million foreign guests this year, he reiterated, noting that he thinks “we will be able to reach these numbers if we return to normalization before it’s too late.”

Turkey on Wednesday recorded 11,533 new coronavirus infections and 233 daily deaths due to COVID-19, data from the Health Ministry showed.

After setting consecutive records with the number of daily cases reaching as high as 60,000, Ankara on April 29 imposed a 17-day total lockdown that brought life to a standstill across the country. The measures, however, proved effective as the number of daily infections rapidly declined.

As daily cases fell as much as 75%, Ankara on Monday decided to ease some of the restrictions in what it called a "gradual normalization period."

The measures include a curfew from 9 p.m. to 5 a.m. on weekdays and a full lockdown during the weekends.

Theaters, gyms, swimming pools and similar places will remain closed, while restaurants and cafes will be allowed to serve deliveries and take-away orders.

Introduced during the total lockdown period, the ban on intercity travel was eased, as well. People are allowed to travel between cities by car only when the curfew is not in effect, but travel by bus or airplane is allowed at all times.

Tourism Association President Bülent Ilbahar in Aegean resort town of Kuşadası also said that after 17 days of complete closure, hopes have lifted as the number of cases has dramatically decreased, despite not reaching the desired target.