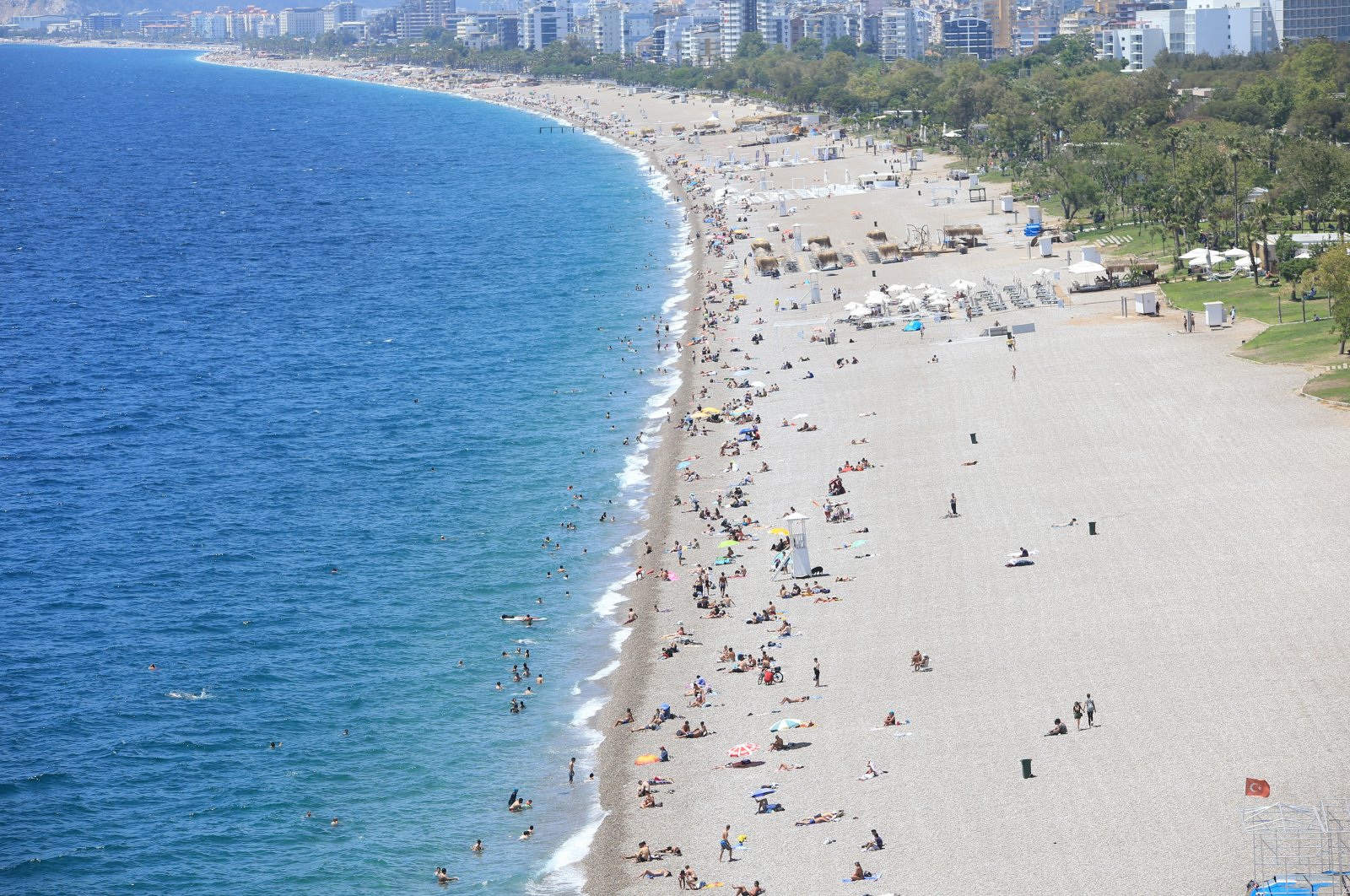 Turkey’s Mediterranean resort city of Antalya welcomed some 445,671 foreign visitors from January through April this year, official data showed, as the number of Russian tourists doubled from a year ago despite Moscow’s decision last month to halt flights.

Tourists from Russia alone accounted for some 296,131 of the overall figure, Antalya Provincial Directorate of Culture and Tourism data compiled on Wednesday showed.

Arrivals from the country's top source of visitors doubled compared to a year ago when 145,406 Russians arrived in Antalya from January through April.

Millions of Russian tourists travel to Turkey each year and Moscow’s decision last month to halt flights from April 15 until June 1, citing growing COVID-19 cases, has dealt a blow to the tourism industry.

“We reached an agreement on the Russian vaccine to reach Turkey as soon as possible, as well as steps for the tourism season, the starting of flights and speeding up the process,” Kalın said following the talks with the Russian authorities.

Officials also said a Russian delegation is expected to visit Turkey soon to assess pandemic measures and decide whether to restart reciprocal flights.

Moscow’s decision to halt most flights is said to have blocked the plans of 500,000 tourists, who had hoped to visit during the April to June period.

Turkey welcomed 2.1 million Russians last year and some 6 million the year before the pandemic.

“We expect a lot more tourists with the start of mutual flights from Russia,” said the chairperson of the Antalya City Council Tourism Working Group, Recep Yavuz.

“Last year, we started the season in the middle of July. We are now in May and around half a million tourists have arrived,” Yavuz told Anadolu Agency (AA).

Antalya had hosted a total of 511,498 foreign visitors in the January-April period of 2020, overshadowed by the pandemic that halted international travel, according to official data.

The figure in the four-month period this year would have been much higher hadn’t there been for flight suspension from Russia, Cem Kınay, head of the Anatolia Sustainable Culture and Tourism Foundation, known as the developer of the “all-inclusive” system in tourism, said.

“There was an intense demand,” Kınay noted. “Russians did not even travel to other countries during the holiday period. Turkey is an indispensable destination.”

“The numbers of tourists coming to Antalya since the beginning of the year are very good, given the coronavirus pandemic. Although we cannot compare it to previous years, it’s important that they (tourists) arrived during even the pandemic,” he added.

Kınay suggested that arrivals would gather pace along with the decline in the daily COVID-19 cases and acceleration in the vaccination campaign.

Turkey emerged on Monday from a full lockdown that lasted nearly three weeks and eased restrictions, offering some hope for the summer tourist season.

The uncertainty over whether the Russian government will extend the flight restriction period has prompted the airlines’ decision to suspend flights beyond June 1.

Russia’s S7 Airlines on Tuesday joined flag carrier Aeroflot in its decision to cancel flights to Turkey this summer as they await a government decision.

“We have stopped sales and canceled all flights to Turkey for June, with the exception of two flights per week permitted by the (coronavirus) taskforce so as not to inconvenience passengers due to possible cancelations,” Aeroflot said in a statement Monday.

On Monday evening, the headquarters – the operational headquarters for control and monitoring of the situation with coronavirus – said no decisions have been made to extend the restrictions until June 30.

A day later, S7 Airlines said it had canceled all flights to Turkey until the end of the summer because of uncertainty surrounding its ability to fly there.

“We will be ready to resume sales as soon as the epidemiological situation stabilizes and flights resume,” S7 said.

Around 500,000 Russians have traveled to Turkey in the first quarter of the year, according to Russia’s Association of Tour Operators.