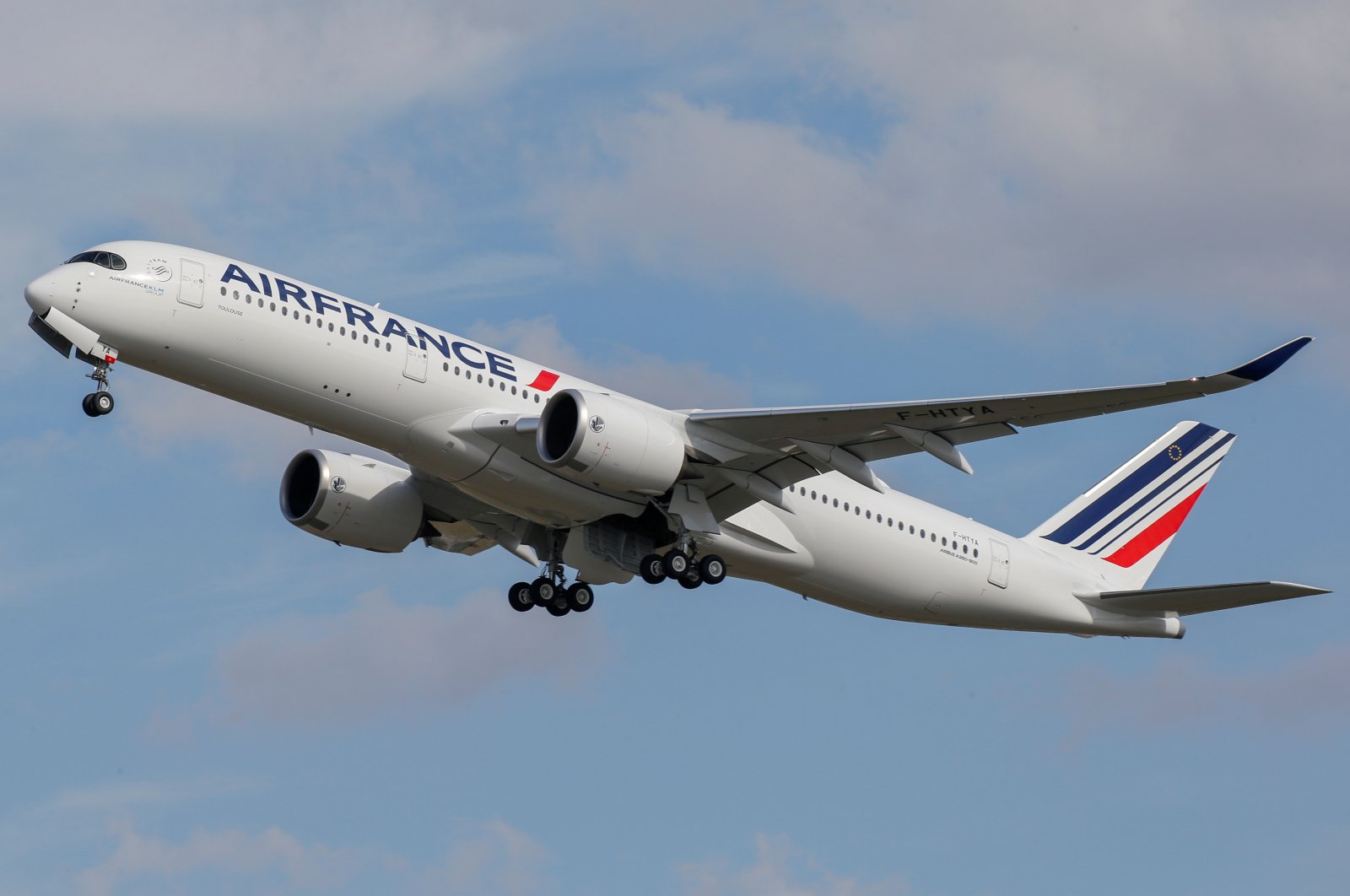 The first Air France Airbus A350 takes off after a ceremony at the aircraft maker's headquarters in Colomiers near Toulouse, France, Sept. 27, 2019. (Reuters Photo)
by French Press Agency - AFP May 06, 2021 3:09 pm
RECOMMENDED

Amid persisting global travel restrictions imposed to prevent the spread of the COVID-19 outbreak, Air France-KLM on Thursday posted huge losses for first quarter while warning that the situation would not improve much in the next few months.

With passenger numbers in the quarter down 73% compared with a year earlier, the French-Dutch group is pinning its hopes on mass vaccinations allowing global travel to kickstart again later in the year.

Air France-KLM saw 1.5 billion euros ($1.8 billion) evaporate after tax in the first quarter while revenues were down 57% compared to a year earlier.

The French and Dutch governments have propped up the airline since the pandemic wrecked travel and tourism last year, with Paris coming to the rescue again last month.

"A year into the COVID crisis, lockdown measures and travel restrictions in our home markets and around the world continue to strongly impact the group's activity," chief executive Benjamin Smith said in a statement, describing the environment as "ever-challenging."

Chief financial officer Frederic Gagey warned that the start of the second quarter was also "not showing any notable improvement" so far, with international flights still heavily restricted across much of the planet.

Smith, however, insisted the company was looking forward "to the summer season with greater confidence, hoping that the progress of the vaccination roll-out worldwide and the implementation of travel passes will allow borders to reopen and traffic to recover."

In the meantime, the airline is continuing with cost-cutting measures, including voluntary redundancies.

In April, the French state doubled its stake in the company to nearly 30%. The airline also raised just over one billion euros in a share issue.

But like long-haul rivals including Lufthansa and IAG, which operate British Airways and Iberia, it remains highly vulnerable.

This quarter, Air France-KLM – which operates low-cost airline Transavia as well as the French and Dutch flag carriers – used just 48% of the capacity used in the same period in 2019, measured in available seat kilometers.

This is expected to edge up to 50% in the second quarter.

With many governments eyeing a return to international tourism in the crucial summer season, the group expects to raise capacity to between 55% and 65% of pre-pandemic 2019 levels in the third quarter, it said in a statement.

A controversy erupted in the Netherlands last month over a 2 million-euro payout to Smith in 2020 despite the losses.

Dutch lawmakers backed a motion demanding the withdrawal of the payment to Air France-KLM's boss and threatening to block any future aid to the group.