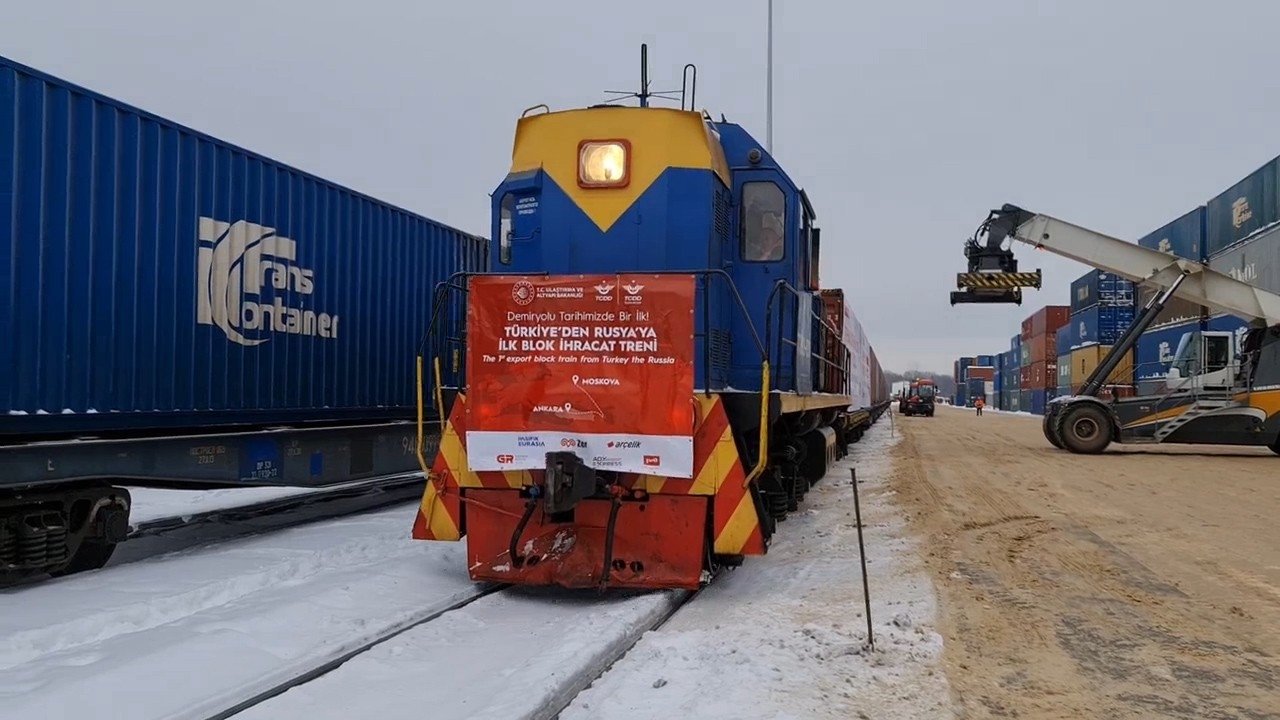 Railway trade between Turkey and Russia bears great potential, with the agriculture and metallurgy sectors coming to the forefront, Sergey Pavlov, first deputy managing director at Russian Railways said Tuesday. He stressed the importance of the block export train that recently reached Russia from Turkey on the Baku-Tbilisi-Kars (BTK) Railway in terms of boosting bilateral trade.

Pavlov told Anadolu Agency (AA) that the cooperation between Turkey and Russia that provides mutual benefits has a good history and positive indicators. He also said after the inclusion of Russian Railways, the transportation of foreign trade goods between the two countries surpassed 20 million tons in 2020, with an increase of 10% compared to the previous year.

Pavlov pointed out that after a new railway route via the BTK was commissioned in 2017 and a memorandum of understanding (MoU) was signed in May 2019, to accelerate the transportation on the new line, the two countries were connected with a direct railway line.

Pavlov said they are ready to take all the necessary measures to ensure the regular flow of foreign trade goods through the BTK.

"According to our estimations, this new line is set to be more advantageous in terms of both time and costs when compared to other transport ways. The estimated shipping time will be 10 days, excluding the loading and unloading times," which is half the time spent via marine transportation, he said.

The first block train that left the Turkish capital Ankara on Jan. 29 en route to the Kaluga region near Moscow using the BTK reached its final stop on Feb. 9.

Pavlov also stressed that railway transportation is free from the risks that erupt due to weather conditions, adding: "Besides, it is epidemiologically safer. It allows the load to be delivered with minimum human contact. As you know, a train with one driver can replace some 80 trucks and their drivers."

He said, during the COVID-19 pandemic, which prioritized decreasing human contact, countries turned toward railway as an alternative, noting that transportation began on the China-France connection line, new services connected to Scandinavian countries emerged and that there was an increase in the transportation via the China-Belarus route.

"The development of transit traffic in the direction of Turkey is also very interesting and highly promising. In this respect, the development of transportation both by using the BTK route and through Russia's ports is remarkable," he said. Turkey is also among the countries that turned toward railway to avoid spreading the virus while maintaining trade, along with other measures such as the "contactless trade" introduced right after the emergence of the virus cases in the country.

Pavlov said the modern-day Silk Road route network is constantly evolving and that they are pleased to see Turkey among the transit hubs. The BTK rail line connects Azerbaijan's capital Baku on the Caspian Sea to Turkey's eastern border city of Kars via the Georgian capital Tbilisi. It is also connected to China's Iron Silk Road that reaches Europe before traveling through Turkmenistan and Kazakhstan to Baku via train ferries. The trains cross Georgia to enter Turkey via the BTK and then reach the western coast of Turkey before entering Europe.

The Russian official also touched on the "strategic importance" of the railway sector for his country. He said Russian Railways is among the world's giants in terms of cargo transportation, adding that the company, apart from transportation and logistics, also operates in the construction and management of the railway infrastructure, machine and special equipment supply, research and development (R&D) and consultancy.

The fields in question hold potential for cooperation with Turkey, Pavlov noted, emphasizing that they are currently working on increasing the railways' share in the exported good transportation with Turkey.

Stressing that it is also important to widen the transported goods' variety, Pavlov said, apart from Turkish consumption goods, the transport of fresh fruits and vegetables in refrigerated containers from Turkey to Russia will add to the share of the railway transportation.

Russian metal companies are also interested in direct railway transportation to Turkey, he said, noting that in 2020, more than 45,000 tons of sheet metal were transported from Magnitogorsk Iron and Steel Works in Russia via the BTK line.