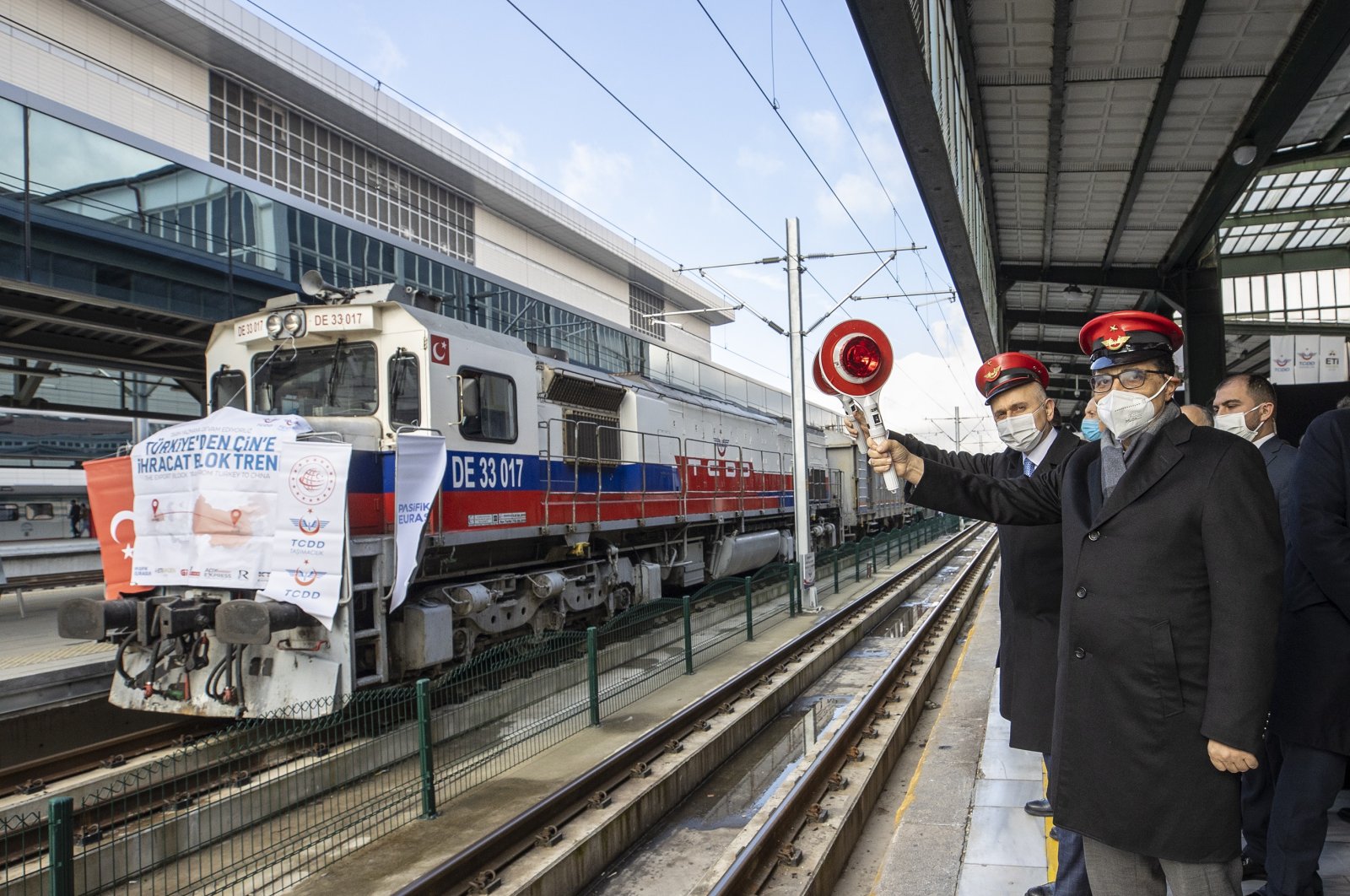 Turkey on Friday sent off two export trains, one headed to Russia and the other to China, using the Baku-Tbilisi-Kars (BTK) railway from the capital Ankara. The train to Russia is the first block train to use the route while the second one, which is carrying boron containers, is the third China-bound freight train.

Both indicate Turkey’s significant place on the modern Silk Route trade and global transportation network. Transportation and Infrastructure Minister Adil Karaismailoğlu, speaking during the send-off ceremony at Ankara Terminal, from where the trains left for their destinations, said the country has become the most strategic connection on the Iron Silk Road.

Karaismailoğlu noted that China’s Belt and Road Initiative (BRI) project – which is an ambitious initiative connecting China, Asia, Europe and the Middle East and covering a large trade and investment area – is important for Turkey and is an opportunity to expand exports.

With the proactive policies, Turkey has integrated into the world railway transport network in a short time and has now become a strategic part of the Iron Silk Road of the BRI, Karaismailoğlu said.

The BTK line connects Azerbaijan’s capital Baku on the Caspian Sea to Turkey’s eastern border city of Kars via the Georgian capital, Tbilisi. Meanwhile, China’s Iron Silk Road connects China to Europe via Turkmenistan and Kazakhstan to Baku via train ferries. The trains cross Georgia to enter Turkey via the BTK and then reach the western coast of Turkey before entering Europe.

The first train sent off on the BTK, which started its activities on Oct. 30, 2017, opened a new era in the global rail transportation, Karaismailoğlu said.

The Marmaray tunnel connects Istanbul's Asian and European sides beneath the Bosporus.

“Our export train, which we are seeing off today, will travel approximately 4,650 kilometers (2,889 miles) to Moscow, its destination in the Russian Federation, using the BTK line. The 3,321 dishwashers, stoves and ovens produced in our country will be transported to the Vladimir Region of Russia in 15 containers loaded in 15 wagons,” Karaismailoğlu said. He said the development in this transport, which was previously carried out via sea and land routes, is the result of the trust shown in Turkey’s railway transportation.

Reducing both time and costs

The transport minister further emphasized that the increase in exports is a shared aim of all authorities in the country and that these transportation routes will support the initiatives of the state toward this goal.

Karaismailoğlu noted that the Russia-Turkey railway transportation will be a significant alternative for exports.

Underlining that it is extremely important for both Russia and Turkey to transport their exports and imports via the railroad and thus strengthen commercial relations, Karaismailoğlu noted that these shipments are not commercial activities alone.

“Trade and purchasing are among the most important elements of the multidimensional relations between Turkey and Russia and also strengthen the bridge of friendship between the two countries,” he said.

Karaismailoğlu highlighted that they attribute great importance to the junction lines to provide railway connections to centers with export potential such as factories, ports and organized industrial zones (OIZ) to increase freight transportation. He noted that the construction of five junction lines that are 83.5 kilometers long continues.

The establishment of logistic centers is also one of the important topics on the agenda, in a bid to make Turkey a regional logistics hub and to boost the industrialists’ competitiveness, Karaismailoğlu said. Eleven logistics centers have been commissioned to date, and they will soon open the Kars Logistics Center in eastern Turkey, he said. Ankara also aims to establish logistics centers abroad, one of which is planned for the U.S., according to recent statements.

Meanwhile, Karaismailoğlu reiterated that the export trains are now being sent to China on a regular basis, including one of the trains sent off on Friday.

Turkey’s Eti Maden is undertaking the export of 42 containers of boron on a 754-meter-long (2,474-foot-long) train from Kırka in central Eskişehir beginning on the Ankara-Sivas-Kars route and finalizing its journey in Turkey on Feb. 2. It will continue its two-week trip through the BTK railway to Xi'an.

On its journey from Turkey to China, the train, which is the third such export train to China, will cover a total distance of 7,792 kilometers.

Turkey's export of boron via railway to China will cut its transportation down from the previous 45-60-day maritime journey to just 15-20 days, Energy and Natural Resources Minister Fatih Dönmez said Friday.

Dönmez stressed that China has become a key mining export market for Turkey with 5.8 million tons in exports to the Asian country in 2020.

Despite all the difficulties in 2020 caused by the pandemic, he said that Turkey managed to sustain its position as a leading global boron sector player, supplying 57% of global demand and reaching 1.73 million tons in boron sales worldwide.

The first train carrying goods from Turkey to China set off from Istanbul on Dec. 4, covering a distance of 8,693 kilometers across Turkey, Georgia, Azerbaijan, the Caspian Sea and Kazakhstan to reach the Chinese city of Xi'an and complete its historic trip on Dec. 19.