Turkey opposes all forms of terrorism in Syria 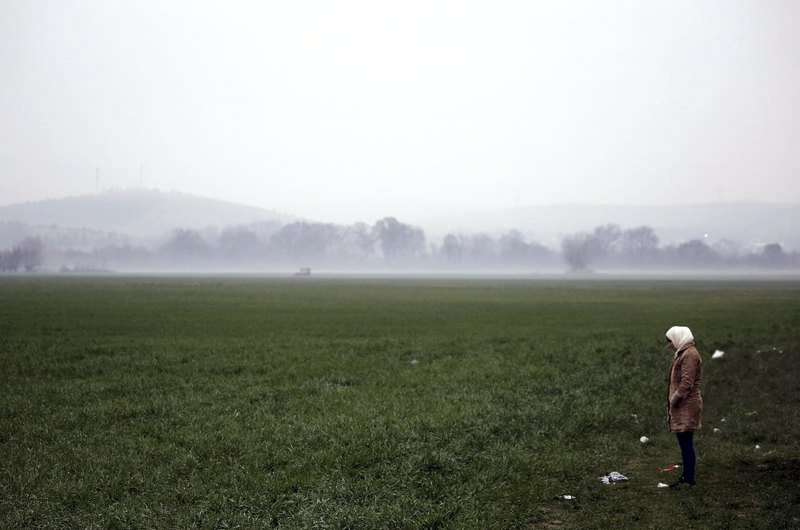 What Ankara opposes is a PKK-led political entity and terror state that is now being sought out in northern Syria thanks to misplaced support from the U.S., Russia and the Assad regime

All eyes will be on what happens next on the ground in Syria as the Munich agreement on the cessation of hostilities is expected to take effect at midnight Saturday. But as the war drags on, security concerns grow deeper.

As a member of the anti-DAESH coalition, Turkey supports the measures taken against this terrorist organization. But the war in Syria is now more than eliminating DAESH. It has morphed into a major security risk for Turkey along its southern border.

Ankara's concerns over the People's Protection Units (YPG) have been triggered by two simultaneous developments in recent weeks. The first is the YPG's attacks on moderate opposition groups in Azaz, Tal Rifaat, Idlib and the Aleppo areas in an attempt to move to the east of Afrin. This appears to be part of a plan to capture land between Afrin and land east of Euphrates. As Ufuk Ulutaş points out, the YPG's ultimate goal is to expand territory under its control in the name of fighting DAESH.

The YPG is now doing this with the full support of Russian airstrikes and Syrian leader Bashar Assad's regime. While helping Russia and the Assad regime, this is weakening Syrian opposition groups.

The second concern relates to the YPG's longstanding relationship with the PKK, a designated terrorist organization by the U.S. and EU. The recent increase in PKK attacks in Turkey has been supported and facilitated by YPG elements that help the PKK with arms, ammunition and militants along the Turkish-Syrian border. While Turkey seeks to secure its border against DAESH and foreign fighters, it is also taking measures to stop the flow of weapons and PKK-affiliated terrorists from Syria.

The PKK feels emboldened by the support its Syrian branch receives in the so-called fight against DAESH. It uses the war in Syria to recruit new members and carry out attacks in Turkey. Pro-PKK commentators conveniently disregard the fact that the PKK singlehandedly sabotaged the reconciliation process the government initiated.

If the PKK and its political affiliates really want the resumption of the reconciliation process, it can easily cease its terrorist activities and declare its disarmament. This way it can foil what is deceptively called "President Recep Tayyip Erdoğan's war on the Kurds". But it refuses to do so. Instead, the PKK and its advocates use words of peace and democracy while whitewashing and supporting PKK terrorism.

Turkey has every right to demand support from its allies. It is wrong both morally and politically to turn a blind eye to the terrorist connection between the PKK and YPG. The Democratic Union Party (PYD) was established in 2003 under the direct orders of imprisoned PKK leader Abdullah Öcalan. It has adapted the same ideological goals and organizational structures and never hid its connection to the PKK. Since the 1980s, about 20 percent of PKK fighters have come from Syria. As Ragıp Soylu wrote in his detailed report, many U.S. intelligence analyses and reports have referred to the connection between the PKK and PYD.

It is only disingenuous to present Ankara's rejection of the PKK and PYD as anti-Kurdish. Contrary to the claims in The New York Times' misguided editorial, Turkey has nothing against the Kurds of Turkey, Iraq, Syria or Iran. Turkey opposes terrorist organizations whether led by religious, ethnic or Marxist-Leninist ideologies. Turkey has excellent relations with the Kurdistan Regional Government (KRG) of Northern Iraq because they have no connection with either the PKK or the Assad regime. But it looks like some in the West are in the habit of legitimating terrorist organizations when they serve their interests. Just because one does not like Erdoğan does not entitle them to support a terrorist organization.

According to a recent Bloomberg analysis, U.S. officials acknowledge the YPG's connections with regime-supported militia groups and the PKK: "Some administration officials told us that U.S. intelligence has documented meetings between the Kurds' armed group and officials in the Iranian Revolutionary Guards Quds Force, which has fought alongside the Assad regime against the opposition since 2011. This faction also says the Kurdish group, the YPG, is closely working with the PKK, a Kurdish terrorist organization at war with Turkey."

What Ankara opposes is a PKK-led political entity and terror state that is now being sought out in northern Syria thanks to the misplaced support of the U.S., Russia and the Assad regime.

This has nothing to do with the Kurds of Syria reclaiming their rights. To the contrary, Ankara has supported the rights of Kurds whether in Syria or Iraq. As a matter of fact, it was Erdoğan who raised the rights of Syrian Kurds with Assad before anyone even spoke of them. It was also Turkey that let around 200,000 residents of Kobani into the country when the city was attacked by DAESH in 2014.

What is happening is rather a de facto expansion of the PKK's Syrian affiliate into the non-Kurdish areas of northern Syria. The PYD and YPG are known for human rights violations and, according to Amnesty International, have possibly committed war crimes by the "razing of villages."

The reality is that the U.S. is using the YPG against DAESH, Russia is using it to support the Assad regime, and Assad is using it for his own survival and against Turkey. Assad is following in his father's footsteps in his dealing with the Kurds. Hafiz Assad allowed the PKK into Syria and gave Öcalan safe haven in the 1980s in order to use it against Turkey. When the PKK no longer served his interests, he kicked them out. Until a year ago, Bashar Assad saw Syrian Kurds as expendable subjects and oppressed them. He is seeking to get them on his side because he now has a vested interested in a deal with PYD and its YPG, which are doing the greatest disservice to Syrian Kurds by allying themselves with the criminal Assad regime. The support given to the PYD and YPG in Syria at the moment primarily serves Russia and the Assad regime's interests.

Everyone should make a clear distinction between the PYD and YPG and the Kurds of Syria and harbor no animosity for them. Just as the PKK does not represent Kurds in Turkey, the PYD is not the sole representative of Kurds of Syria. As a matter of fact, there are thousands of Kurds who do not share the PKK and PYD's ideology and take a dignified stance against the Assad regime.

In the final analysis, the so-called fight against DAESH has turned into a disingenuous game of power whereby a constellation of proxy wars is waged in Syria and Iraq. It is mindboggling as well as outrageous that we are now asked to quietly forget about the horrible crimes of the Assad regimes and its backers and turn a blind eye to more than 400,000 dead and millions of refugees all in the name of fighting DAESH.
Last Update: Feb 27, 2016 1:43 am