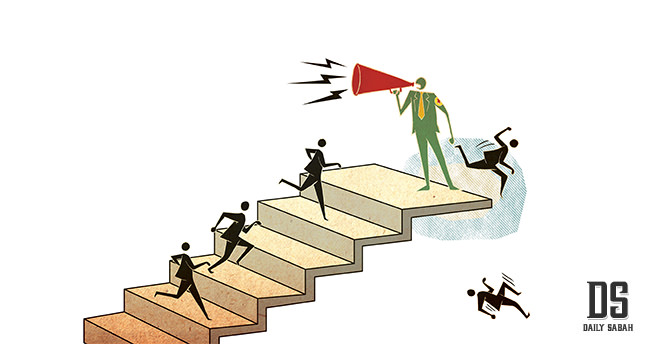 Turkey will continue to fight against PKK terrorism to protect its citizens, including the Kurds. Turkey will also remain an active member of the anti-DAESH coalition

The terrorist attack in Ankara on March 13 is the latest in a string of attacks in recent months. Turkey becomes a target of international terrorism as it intensifies its fight against DAESH on the one hand and the PKK on the other. Despite the chaos and terror such attacks cause, Turkey will not give in to the politics of terrorism. Turkey's resilience and resolve will be crucial to contain and destroy this menace.

These recent attacks by DAESH and the PKK are the latest consequences of the five-year Syrian civil war. As DAESH is squeezed by coalition forces along the Turkish-Syrian border, it attacks Turkish towns and cities to pressure Turkey. DAESH has already declared Turkey an enemy target. Its online outlets even describe Turkey and President Recep Tayyip Erdoğan as enemies of Islam.

The PKK is following a similar tactic. As it is cornered in the southeastern cities of Diyarbakır, Hakkari, Şırnak and Mardin, it carries out terrorist attacks in Ankara and other big cities. Their calculation is that these attacks will create such public fear and reaction that the government will be forced to end its anti-terror operations against the PKK. Both calculations are wrong. Turkey will not give in to terrorist threats from either DAESH or the PKK.

While the West presents DAESH and the PKK Syrian affiliate Democratic Union Party's (PYD) armed People's Protection Units (YPG) fighting against each other in Syria, they are united in their stance against Turkey. Both terrorist organizations use similar methods and tactics to cave Turkey in. They both assume that killing scores of people will change the political climate and public opinion to have their demands accepted.

While we mourn our dead and look after the wounded and their families, we have to see all this within the larger picture of the ongoing Syrian civil war and the PKK's manipulation of it. Ankara has been warning the world against the spillover effects of the Syrian civil war not only for itself, but also for the Middle East and Europe. Given the failure of the international community to protect the Syrian people and stop the bloodshed in their country, the spread of DAESH terrorism to Belgium, France and Tunisia, to remember just a few of the recent terrorist attacks, was almost inevitable.

The refugee crisis, originating primarily from Syria, has already led to a major crisis in Europe. How and when the flow of refugees will stop remains a challenging question for Turkey, Greece, Brussels and the rest of Europe. The negotiations that Prime Minister Ahmet Davutoğlu has with European leaders have a high chance to manage the influx of refugees from Syria and elsewhere to Europe. The root cause of the problem, however, lies not in Turkey or the Greek islands, but in Syria.

Ankara's concerns over the PKK have once more proved to be true. Many commentators in the West look over the PKK's manipulation of the Syrian civil war for its own interests. They do this in the name of fighting DAESH. But the reality is that the PKK sabotaged the reconciliation process in Turkey and sought to take advantage of the carnage in Syria. As PKK leaders have said over the last year, the PKK will not disarm as long as the war in Syria continues. Why? Because it sees the Syrian civil war as a savior to justify its armed struggle against the Turkish state. The PKK and its Syria branch feel emboldened and even encouraged to continue terrorism on the pretext of fighting DAESH. It is no secret that PKK terrorists operating in Turkey are now getting material support from PYD-controlled areas in Syria.

Strangely enough, some criticize Ankara for raising the issue of the PKK in the context of the Syrian civil war and the anti-DAESH fight. They even accuse Turkey of diverting attention from the fight against DAESH to the PKK. The attacks of Feb. 17 and March 13, among others, show the extent of the PKK threat to Turkey. Raising the issue of the PKK as a serious threat to Turkey's security is not a diversion from the fight against DAESH. To the contrary, Ankara is right to underline the dual danger of the PKK and DAESH, as both target Turkey for their respective interests. It is a shame that some fail to see this simple fact.

No one would have objected to the U.K.'s concentration on Irish Republican Army (IRA) terrorism in the 1980s and 1990s when there were other terrorist threats such as al-Qaida around the world. The same applies to Spain's justified focus on Basque Homeland Freedom (ETA) terrorism when the world was simultaneously dealing with other terrorist threats. Turkey's position vis-a-vis the PKK and DAESH is no different. Just because the PKK attacks Turkey and not Western targets does not make it less of a security threat or a negligible terrorist organization.

Turkey will continue to fight against PKK terrorism to protect its citizens, including the Kurds. Turkey will also remain an active member of the anti-DAESH coalition. Focusing on DAESH, however, cannot be an excuse to turn a blind eye to PKK terrorism. Ankara is fully justified to demand its allies stand by it against all forms of terrorism.

Presidential spokesperson for the Republic of Turkey
Last Update: Mar 15, 2016 1:36 am
RELATED TOPICS