A roundup of expat achievements in Turkey in 2021 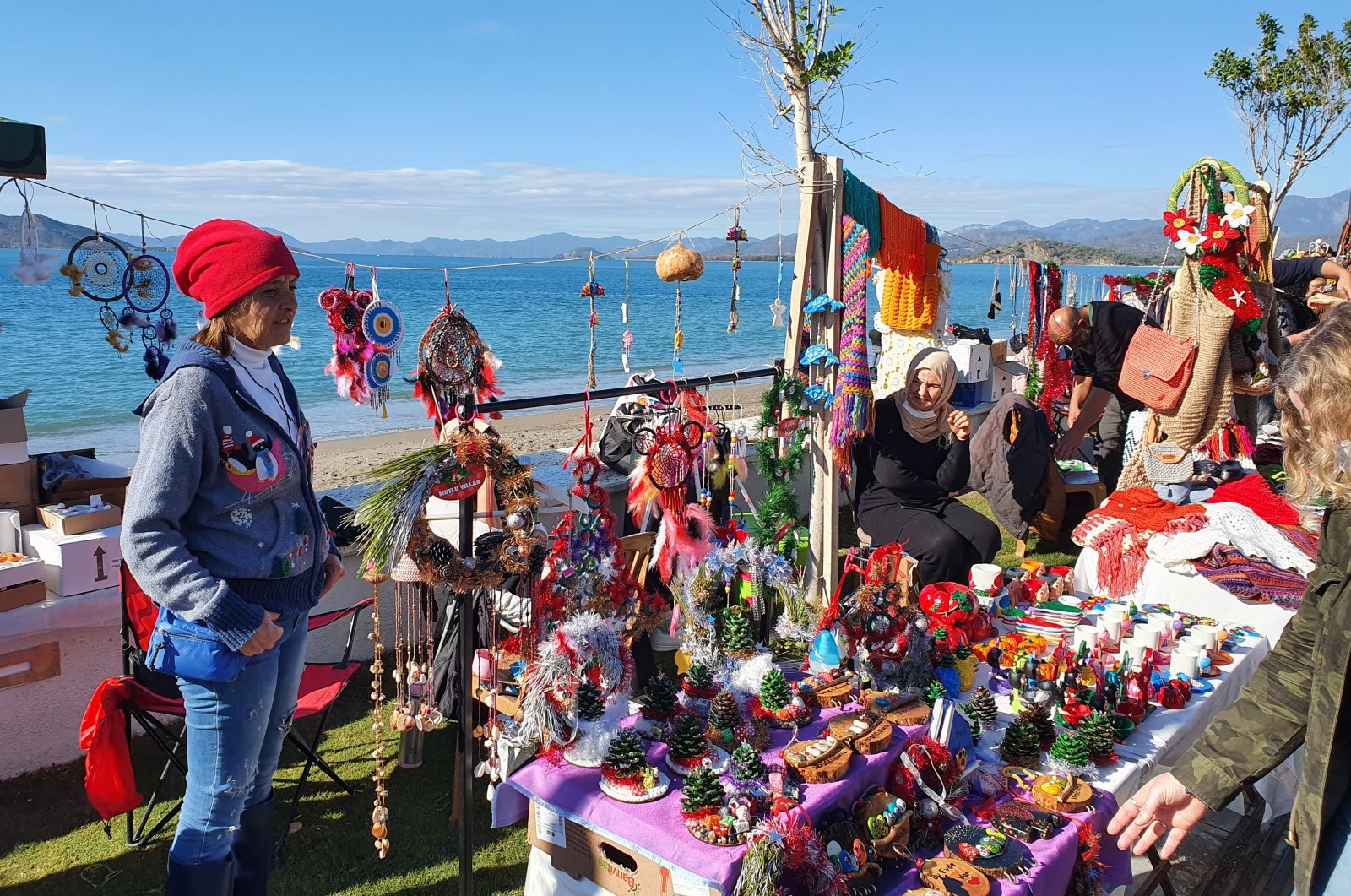 This Saturday, Dec. 18 is International Migrants Day, which if you think about it, is pretty much as close as you can get to a day celebrating expats. The lines blur in the definitions of the words “expat” and “migrant” as both are in essence individuals who have chosen to reside elsewhere than their place of upbringing. While “expat” has a laissez-faire connotation, the word migrant draws references to employment abroad, yet as you will see, many members of our expat community here in Turkey also continue to work and contribute to their adopted homeland.

According to this year’s figures released by Turkey’s Directorate General of Migration Management in 2021, there were 1.23 million foreigners with legal status. This was the highest figure of its kind since 2005. Nonetheless, there are a lot of us and it is pertinent to acknowledge our efforts and achievements this year in honor of this day. In fact, there were so many successes worth mentioning amongst Turkey’s expats, that this article had to become a two-part series.

The 3Cs Charity and their blowout Xmas market

The 3Cs, namely Çalış Children’s Charity, was set up in 2010 and is run predominantly by expats who hold holiday and secondhand markets and run a shop in Fethiye’s Çalış to collect funds to assist local disadvantaged children. Working in connection with Fethiye Tourism, Promotion, Education, Culture and Environment Foundation (FETAV) the funds collected go to help children facing challenging issues such as needing medical care and not having the funds to receive it. Amongst the many children they assist, one such example is of a 6-year-old girl, who received laser treatment for a debilitating nevus, including transportation and accommodation in Istanbul for the procedure, thanks to their support. In addition to providing financial support for medical conditions, the charity also helps schools in the area that need equipment that benefits children.

On Dec. 5, the 3Cs held a Christmas Market in Çalış that was easily the biggest of its kind to ever take place in Turkey. There was a raffle, music and carols and even a flash mob to introduce Santa! With 173 stalls and thousands of visitors from all over the southern coastal region, it was a memorable and meaningful day that helped the organization collect upward of TL 15,000 (around $1,056) that will be donated to assist children. British expat and the charity and event’s organizer Caroline McGuire told me there were nearly 400 applicants for stalls. She added that 35 of the stalls were rented by foreign nationals from the United Kingdom, Belgium, Germany and Russia and the remaining were rented by Turks. All of the stalls were carefully selected to reflect the holiday theme of the market, Caroline adds.

The 3Cs not only hold three such markets a year, with the next to come in spring and in autumn, but they also run a secondhand shop, where people can donate clothes or purchase quality items at affordable prices. The shop, located in Çalış, is run by volunteers and is open Monday, Wednesday and Friday from 11 a.m. to 1 p.m. There is also a bimonthly “boot sale” market held on every second and last Sunday of the month. They also organize regular raffles and coffee mornings as well as fun events such as fashion shows, which you can learn about on their Facebook page Çalış Children’s Charity.

A blessing in disguise: Le Cuistot Bistro is the bomb!

Sometimes bad things happen for a good reason. That’s what Belgian expat-chef Carlos Le Cuistot and his vast community of regulars, many of which are expats, found out when he was forced to transfer his popular cafe and traiteur from Tarabya to Beyoğlu’s Asmali Mescit to what ended up being an even better location for his customers. Opened on April 1 of this year, this new venue couples Le Cuistot’s scrumptious gourmet international food and French pastries with near-nightly performances by outfits such as the expat-heavy Uninvited Jazz Band, the Aloloco group and Trio Chocolate Cuban band and you literally have the grooviest place in town. Recently featured on a culinary television program on BeinGurme, Le Cuistot’s world cuisine specializes in Belgian food such as Belgian mussels, volovan and different seafood dishes. The breakfast is divine and centered on croissant plates and sandwiches and specialties such as French Toast, Belgian waffles and pancakes. Le Cuistot Bistro will also be hosting a special evening on New Year’s Eve, with a craftily carved menu of duck, stuffed turkey rolls, salmon tartare, French bisque and speculoos tiramisu accompanied by live Cuban music followed by a DJ to ring in the new year.

Bob Sauler is an American expat who found himself stuck in Turkey due to the pandemic causing Vietnam, his previous home, to shut the borders to foreigners. Luckily for him, he found his way to Bodrum’s bohemian Gümüşlük neighborhood, where a group of eager and skilled musicians quickly joined forces to make Sauler and his Jazztica band one of the most exciting developments down south during the COVID-19 era.

Playing throughout Bodrum in cafes, squares and even a boat led to the release of his first album “Dude on a Boat,” a compilation of nine original songs such as “Ghost of Myndos,” which are inspired by his unexpected life here in Turkey. Bob continues to perform for his now devoted fans throughout Bodrum, but you can also check out his great melodies, guitar playing and lively vocals on Spotify.

Lisa Morrow, an Australian sociologist, author and blogger, whose books and insights on her prolific blog “Inside Out in Turkey” have been vital to many an expat’s survival in Turkey, has recently released a new book entitled “Longing for Istanbul: The Words I Haven't Said Yet.” This intimate journey into the experience of a female foreign expat in Turkey consists of 11 meaningful essays sharing the trials and tribulations of life in Istanbul and beyond. Released last month, this latest novel, which is her fourth book on Turkey, is not her only achievement this year as her first book “Exploring Turkish Landscapes: Crossing Inner Boundaries” released in 2014, was translated by Merve Pehlivan and published in Turkish earlier this year under the title “Türkiye'yi Keşfederek Sınırlarımı Aşarken.” In addition to providing a wealth of information on the expat experience in her blog, books and a plethora of foreign publications, Morrow also has an audio-guided tour of Kadıköy for tourists, expats and her readers to discover this special neighborhood in Istanbul.

Lisa Morrow’s partner in life Kim Hewett is also a published author and fellow expat. His 2013 release “Out With the Boys: The Sharpie Days” is about being a half-Italian teenager in Sydney, Australia at a time when Anglo-Saxon culture ruled. A creative and talented couple of expats in Istanbul, Hewett also did the cover art for the book.

Oops! She did it again ... 'Pomegranates and Olive'

Jane Gundoğan, another Australian expat author and blogger of “Janey in Mersin” has done it again! With the release of her newest book “Pomegranate and Olive” in June, she has once again titillated anyone interested in whirlwind romantic adventures based in Turkey. Her previous novel in the same vein “Salep and Ginger,” released in 2019, is also based in Turkey. Meanwhile, Janey in Mersin is a wonderfully entertaining blog detailing her life as a foreigner in Turkey’s southern city of Mersin. She is currently writing a guidebook on Mersin with photographer Nancy Habbas and the sequel to her book, entitled “Galata and Nutmeg,” both of which will be out next June. Both Lisa and Jane’s books could serve as excellent holiday gift options, just saying!

Mark your calendars for Dec. 18

As Saturday, Dec. 18 is International Migrants Day, the Muğla office of the Directorate General of Migration Management will be holding a special event in Bodrum’s historical site of Pedasa in honor of the region’s foreign community. The meetup time is 12 noon at the entrance of Pedasa, which is located near Konacık and there will be a guided tour and leisurely walk to the sites. Mehmet Kavuk, director of Muğla’s Provincial Migration Department; Dr. Zekeriya Bingöl, director of Muğla’s Culture and Tourism and the Director of the Pedasa archeologıcal studies professor Adnan Diler will be there as well. If you would like to take part, feel free to contact me at leylayvonne@gmail.com and if you have any achievements you are grateful for that we can celebrate, please let me know!