An intro to Turkish wedding customs, traditions and superstitions 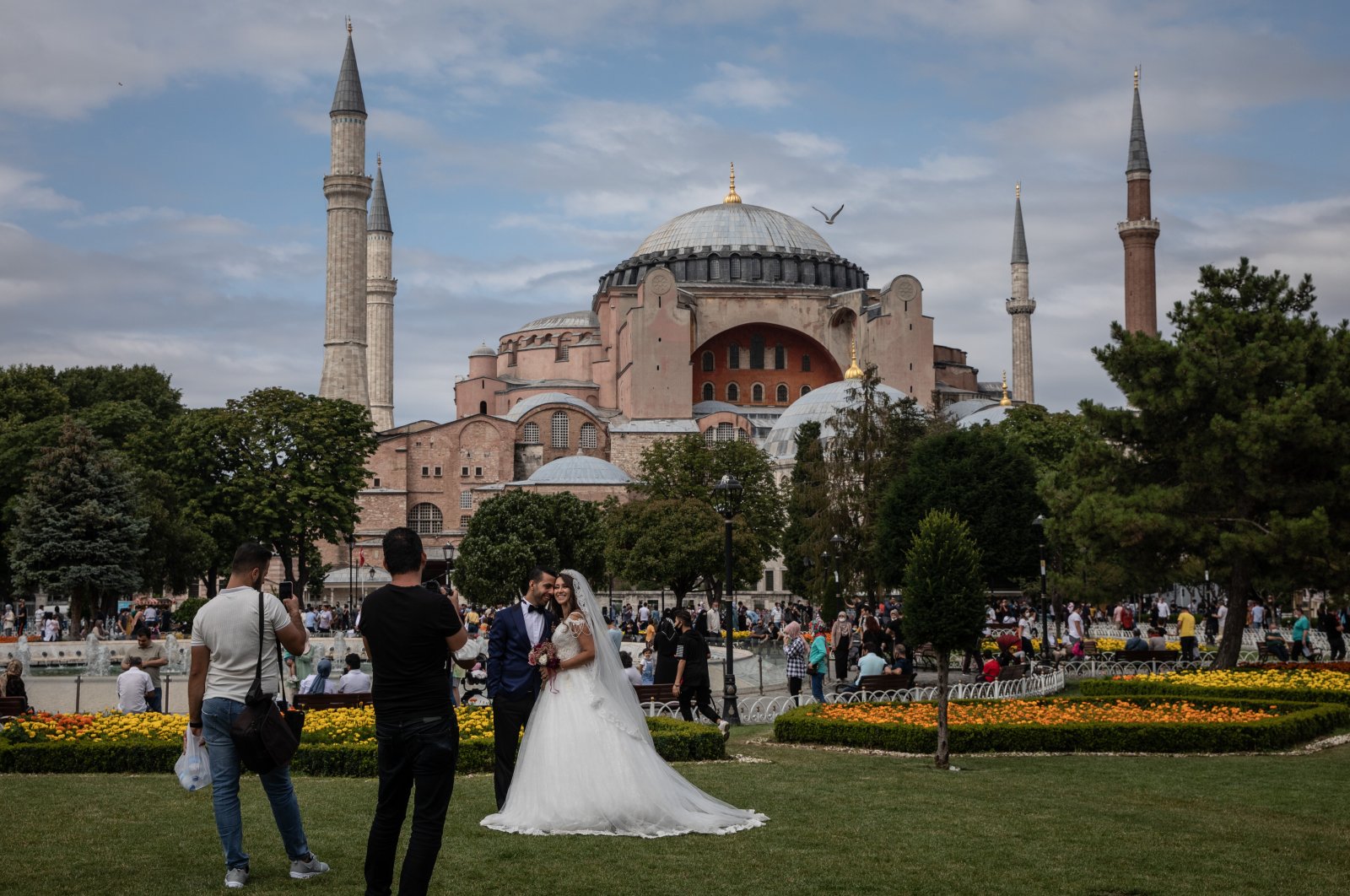 Traditional weddings in Turkey can last for days, especially in rural regions. (Getty Images)
by Leyla Yvonne Ergil
Aug 10, 2021 8:37 am

With summer in full swing, it is officially wedding season in Turkey. From the henna parties to the planting of flags, learn about the customs involved in hosting a traditional wedding in Turkey

In Turkey, the months of August and September have always been the most popular time for weddings. The process of tying the knot is steeped in tradition, can last for days on end and obviously is a big to-do!

Spanning a number of days, especially in rural areas, traditional weddings in Turkey come with a long list of customs, traditions and superstitions that can seem strange to the foreign eye. Thus, here is a guide for foreigners to Turkish wedding rituals:

In Turkey, as is the case in many countries, the summer months are considered the optimal time to hold a wedding, with August and September being the preferred months.

This holds particularly true when the two main national and religious holidays, namely Ramadan Bayram, also known as Eid al-Fitr, and Qurban Bayram, or Eid al-Adha, also fall in the summer months as was the case this year.

There has been a long-standing superstition that weddings should not be held on the dates that fall in between these two holidays, which is a time referred to as Shawwal and is the 10th month of the Islamic calendar. However, it turns out that this belief actually has nothing to do with religion and is in fact rooted in a plague that took place during that month in the Middle East in pre-Islamic times. The superstition that persists to this day is based on the belief that this time of year was cursed and would result in unrest for couples that chose to hold a wedding.

In fact, it was during Shawwal that the Prophet Muhammad himself married his wife Aisha and she is recorded to have recommended the timing for weddings to other women in her circles.

While this superstition continues to persist to this day in some regions in Turkey, the Turkish religious authority Diyanet confirms that this belief is not rooted in religion whatsoever and that people are free to hold weddings at any time of the year they see fit.

Nonetheless, as we leave the two bayrams behind us coupled with the entrance of August and September, get ready for the wedding season to be in full swing in the weeks to come.

The “kına gecesi,” or henna night is an important ritual reaped in tradition and customs that take place in the bride’s home a day or two before the wedding and is only attended by women.

For this event, the bride wears a very special type of red dress or cloak, which is usually adorned with gold embroidery that is referred to as “bindallı.” The henna is to be prepared by a happily married woman and a coin is placed in the dye mixture, the significance of which will pop up later.

Once the henna is ready, the bride-to-be sits in the center on a chair with a veil over her head, which is also usually red, a color believed to represent love and belonging. The ceremony begins with the female elder leading the younger females in attendance in a ceremony in which they hold candles placed in henna-filled copper dishes and walk around the bride singing traditional wedding songs.

The intention is to bring the bride-to-be to tears and the traditional tear-jerker song "Yüksek yüksek tepeler," a song about longing for family and a hometown usually does the trick. Once the bride is brought to tears it is time for the henna dyeing to begin.

The elder in the family is tasked with placing a dollop of henna in the bride-to-be’s palm, but first, the mother-in-law is supposed to place a gold coin in her hand, which is believed to bring good fortune. In fact, the bride is supposed to keep her fist closed until she does so. When the henna has been applied, the bride’s hands are wrapped in a red cloth and the remaining guests are also given henna marks from the copper bowls that had been carried around.

According to superstition, the person who finds the coin in the bowl of henna, as mentioned previously, will soon receive a marriage proposal. After the henna ceremony, the event continues similar to Western “hen nights” with food, dancing and merriment amongst women for the host and bride’s impending wedding.

The belief behind the tradition is to ensure the marrying couple has long-lasting love and is protected from misfortune. Sources tie this age-old practice in these lands to the story, which also spurred the Feast of Sacrifice, with henna representing a sacrifice.

When it rains money

One of the most anticipated rituals in a Turkish wedding is the gold-adorning ceremony in which the bride and groom are approached by friends and family who pin gold coins or bills to a sash that is worn by the newly married couple. On rowdier occasions, dancing crowds may also throw money into the air.

Turkey has a number of more recently developed customs, often borrowed from other cultures, such as the groom not being allowed to see his bride in her gown before the wedding, as it is believed to bring bad luck.

One of the most prominent superstitions tied to the moment after the “I dos” has to do with the newlyweds stepping on each other's feet. Supposedly, whoever steps first is the one who will have the ultimate say in the marriage.

The shoes say it all

In addition to throwing a bouquet, a Turkish wedding offers a number of opportunities for female members of the wedding party to become the next in line to get married.

One such custom is the practice of writing down all of the names of the single women in the wedding party on the bottom of the bride’s shoe. According to the superstition, the first name that rubs off will be getting married soon.

Another folkloric tradition in Turkey is for the bride to be adorned with strings of sparkly tinsel, referred to as “gelin teli.” Her girlfriends will then pick out the tinsel to find the shortest piece as the one that finds it will be the next to wed.

A traditional Turkish wedding, especially in rural regions, will also feature separate parties thrown by the bride and groom’s families. At these wedding parties, the most traditional dish served is “keşkek” a stew-like dish of wheat barley and chicken that is served at special ceremonies in Turkey. It is so integral in Turkish culture in 2011 it was added to UNESCO’s Intangible Cultural Heritage list.

The dish is prepared painstakingly by the groom and his friends that have to grind the barley in the days leading up to the wedding.

The groom is also involved in a “flag-planting” ceremony, which takes place at dawn and kicks off the entire wedding event. According to the tradition, the male members of the wedding party take part in a dawn prayer ceremony and then proceed to put up a flag on the tallest point near the newlywed’s home. Pretty much all of these events transpire accompanied by the “davul and zurna,” traditional Turkish instruments. Players are tasked with providing the soundtrack for each event.

Riding up on horses

Perhaps the most exciting wedding tradition in Turkey is for the bride to be taken from her family home to her wedded home on a horse along with a lively procession and a waving Turkish flag, which is gifted to the groom upon her arrival. Nowadays some couples also decorate cars.