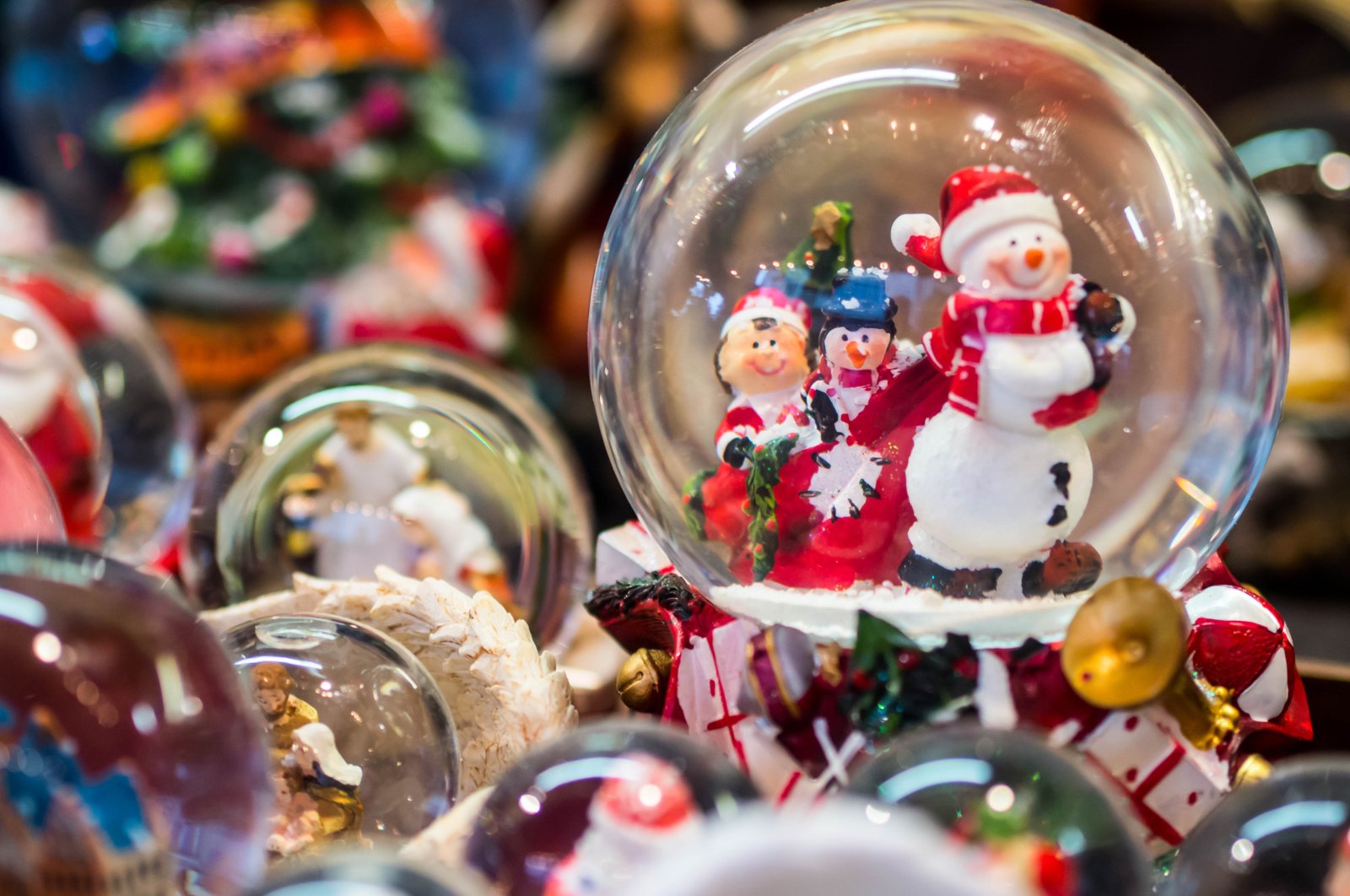 Bodrum is getting ready to host its biggest series of events to celebrate this holiday season. (Shutterstock Photo)
by Leyla Yvonne Ergil Dec 09, 2021 9:19 am

Starting on Dec. 18 and running until Jan. 3, the Bodrum Municipality will be hosting a sleigh ride full of events for 15 consecutive days to ring in 2022 right!

That’s right, the southwestern coastal holiday town-turned metropolis is gearing up to host its biggest series of events to celebrate this holiday season. In fact, the events lined up at the vacation hot spot Bodrum probably constitute one of the grandest celebrations in Turkey for Christmas and New Year’s Eve. Not only will there be concerts by some of Turkey’s leading performers and DJs at three different venues in the city in addition to many local musicians playing throughout the town, but there will also be snow rinks set up at different spots on the peninsula with snow brought in from other regions in Turkey.

While there will be DJs playing through the night and live musical performances held consecutively on three stages set up in Kumbahçe, Hilmi Uran and the Bodrum Municipality squares, a blowout event is planned for New Year’s Eve in which one of Turkey’s top vocalists Sertap Erener will perform. Not to be overshadowed, the fortnight of festivities also includes concerts by Ozan Doğulu and his girlfriend Hera on Saturday, Dec. 25, which is Christmas Day. On Sunday, Dec. 26, popular DJ and performer Jabbar will take the stage, and female vocalist Melek Mosso will perform on Thursday, Dec. 30. The biggest name on the bill is none other than Turkey’s 2003 Eurovision winner Sertap Erener and she will be closing out the year before the countdown to midnight on Friday, Dec. 31. The big-name concerts will take place at the Bodrum Municipality square, which is located in the heart of town, where the Çarşimarket area, the marina and the castle meet.

The festivities will take place from Dec. 18 to Jan. 2 and there will be gift stands, a Christmas band and a parade. There will be an ice skating rink set up in the Municipality, Kumbahçe and Turgutreis squares throughout the festival and the Bodrum Municipality has promised there will be snow brought in from other provinces.

In other Bodrum holiday event news, in the next fortnight, there will be at least five additional holiday markets and festivities in Bodrum, starting with the annual New Year’s Eve Bazaar held at Trafo, a spectacular municipal-run cafe lining the harbor in view of the Bodrum Castle, which will take place this Sunday, Dec. 12.

On the following weekend, from Dec. 18-19, Kefi Bodrum, which is a beach club in Ortakent’s Yahşi, will be holding a Christmas Market with gift stands, DJ music and a snow play area for the kids.

On Sunday, Dec. 19, La Pasión will be hosting a New Year’s Eve Design Fair with stands showcasing unique gifts, a raffle and special treats such as cotton candy and Ottoman pastes (Macun) as well as a DJ and Latin dance performances. La Pasión is a popular locale amongst the expat community and rightly so as it is a beautiful restaurant with a courtyard located in the heart of Bodrum’s Çarşı neighborhood that dishes up an international fare and a rotating menu.

On the same evening, The Jukebox, a fun restaurant in Gumbet that serves as Bodrum’s headquarters for a regular expat trivia night, will be hosting an Annual Christmas Charity Extravaganza. The festivities kick off at 7:30 p.m. and include a live performance by the Del Santos Band, Christmas Carols, a huge raffle, festive food including complimentary mince pies and fun contests such as guessing how much a Christmas cake weighs. The raffle gifts include prizes such as teeth whitening, beauty treatments and jewelry and all of the proceeds will go to help underprivileged children under state care.

Last but not least is a new addition to the list of annual holiday markets held in Bodrum and this one will be taking place at Pab Bodrum, another expansive beach club with a particularly divine gourmet menu located in Ortakent’s Yahşı. The “kermes,” which is the Turkish word for a charity bazaar or fair, will take place from Thursday, Dec. 23 to Saturday, Dec. 25.

Five things to do in Bodrum in winter

If you are wondering what Bodrum looks like at the peak of winter, the city is as bustling as ever with loads of features to cherish at this particular time of the year. Take it from me as someone who has lived in Bodrum in all seasons for many years, winter is its best-kept secret as it is the most suitable time, both weather and traffic-wise, to discover what all the area has to offer.

Delve into the history of the region by visiting the Bodrum Castle and Underwater Archeology Museum (as Bill Gates recently did) and wander around Bodrum’s ancient sites such as the Halicarnassus Ancient City, the Ancient Theater and Mausoleum of Halicarnassus as well as Myndos Gate. Or, check out some of the other museums in town such as the Maritime Museum and the Zeki Müren Museum.

The Pedasa Antique City, which doubles as a historical site dating back 3,000 years as well as a good hike, is easily doable in half a day from Konacık. Another great historical hike is the Leleg Path as there are a number of connecting spots to start and end at that can be driven to. One can take extremely pleasant strolls in Bodrum starting from one end to the other. If the weather is conducive, take a walk along the wonderful path leading to an undeveloped end of the peninsula in Bitez. From the marina to Gümüşlük you can also walk along the Kings Road (Kral Yolu) and go around Rabbit Island (Tavşan Adası).

Surprisingly, this resort town known for being swanky is also home to some of the best village breakfast restaurants in Turkey. From Dirmil to Sandıma in Yalikavak to Dağbelen, each of these villages have multiple restaurants serving unique and generous spreads of local produce, preserves, freshly baked different kinds of bread, egg dishes and pastries. Any breakfast fan can easily say they have had the best breakfast in the world however if they head to Çamlık, a village located less than 20 kilometers (12.4 miles) from Bodrum’s center and en route to the airport that not only has one of the country’s most beautiful golf courses, but has also perfected the art of breakfast with spectacular outdoor garden restaurants offering a buffet with dozens of regional specialty breakfast and lunch items.

Don’t fret if it’s overcast as there is still loads to do in Bodrum that is indoors. First of all, if you haven’t been to Zai then you absolutely must! With a new-wave library, café, restaurant, art space and garden, one could easily wile away the day in this world-class gem of a space. Yet another innovative indoor and outdoor space is the Dibeklihan Culture and Arts Village, which has a restaurant, designer shops and ongoing exhibitions and is housed in a spectacular fortress-like stone complex in Yakaköy.

If all else fails, you can always enjoy a good cup of coffee with people watching rain or basking in the sun as Bodrum has a vibrant coffee culture with stylish and comfortable cafes serving up high-quality brews. Located in Bitez, "Hey Joe" became famous by opening the first hipster coffeeshop in Bodrum – you know, the kind where people can sit alone and read or work in an atmosphere of carefully curated music, books and artwork.

Kaktus Café takes it to the next level by being both a bookstore and café making for a great quiet escape in the heart of Bodrum, while Maride, which is also in Bitez, is enticing for its divine baked goods and resplendent garden. Café Chives is another great spot for coffee, delicious baked treats and a full menu of croissant sandwiches and “Munchboxes,” their visually spectacular goody-filled boxes of sweet and savory baked treats and toppings of charcuterie for savory and fruits for sweet.