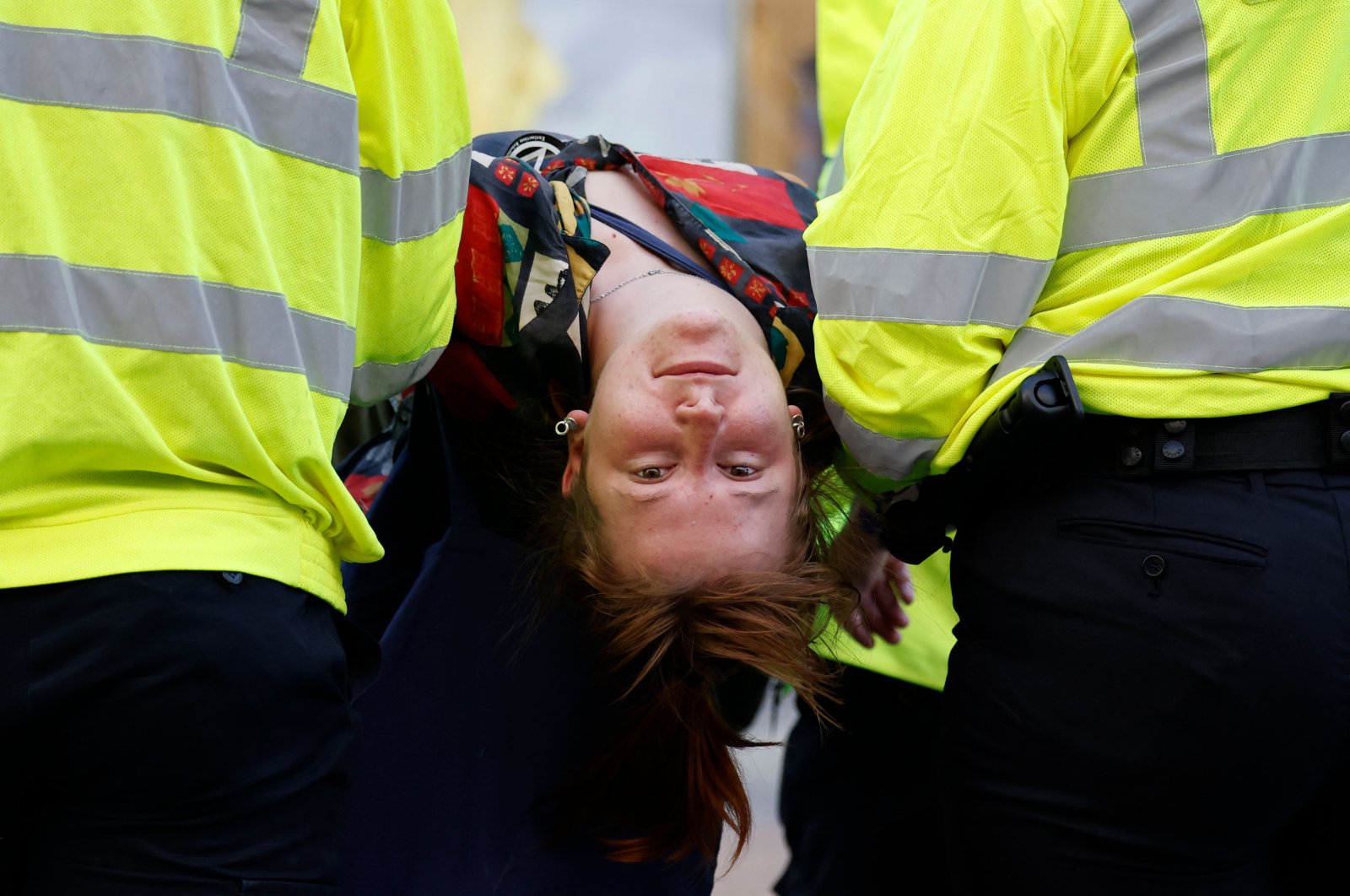 Police officers carry a climate activist from Extinction Rebellion during the group's "Impossible Rebellion" series of actions at Oxford Circus in central London, U.K., on Aug. 25, 2021. (AFP Photo)
by Daily Sabah with DPA Aug 26, 2021 10:51 am
RECOMMENDED

At least 120 tons of rubbish were cleared from the streets of London following the two-week Extinction Rebellion demonstrations in 2019, Member of Parliament for Cities of London and Westminster Nickie Aiken has warned, claiming clean-up costs hit £50,000 ($68,726).

In October 2019 the environmental activists took to the streets of London “to rebel against the world’s governments for their criminal inaction” on climate change.

“The disruption to local people and businesses is immeasurable. I was told by the council that last time Extinction Rebellion were here for two weeks, they cleared 120 tons of rubbish left behind. That added £50,000 to their costs. This is local people’s council tax,” Aiken said to the Telegraph.

Aiken explained that she has been getting many calls and emails over the last few days “from really worried local people.”

Defending protesters, the Extinction Rebellion spokesperson said the £50,000 figure was a "service" cost, meaning the total cost of council services that were temporarily redeployed during the two-week October 2019 protests.

The spokesperson noted that during London’s 2016-2017 New Year celebrations, Westminster cleared up 85 tons of rubbish from just one night, while the 120 tons of rubbish collected in 2019 took place over a two-week period.

“As anyone who has been to an Extinction Rebellion protest will know, we are scrupulous about clearing up after ourselves and ask rebels to respect the spaces they’re in and take their rubbish home,” he added.

This week Extinction Rebellion brought parts of London to a standstill, blocking roads as they demanded the British government immediately end investment in fossil fuels that are driving climate change.

Extinction Rebellion's fifth mass protest targetted what it called the "root cause" of the climate and nature crises.

Demonstrators blocked roads in central London, including around Trafalgar Square.

Activists also set up a large pink structure at the junction of Long Acre and Upper St Martin's Lane with the words "come to the table" written across it to highlight the right everyone has to have a say in how to tackle the crisis.

The giant "table" contained built-in lock-ons so protesters could attach themselves, sleeping quarters and its own stereo system, and activists were preparing to stay and occupy the site.

A visible heavy police presence surrounded the "Impossible Rebellion" protests, which are expected to attempt to disrupt London over the next fortnight, but no arrests had been made by Monday afternoon.

Demonstrations scheduled in central locations included St James' Park, Piccadilly Circus – similar to those carried out in 2019 – but more are due to take place in both north and south London.

The Metropolitan Police said a "significant" operation would be put in place to manage the protests over the busy bank holiday weekend, but acknowledged the activists' "important cause."

In a statement ahead of the protests Extinction Rebellion, which has gained support of celebrities including comedian and author Stephen Fry and actor Jerome Flynn, said they would "target the root cause of the climate and ecological crisis – the political economy."

Gail Bradbrook, Extinction Rebellion co-founder, said: "Our leaders in Government and Business have been failing us for years, they are taking us over a cliff.

"If they are in any way serious about tackling this existential crisis then they would immediately stop financing fossil fuels, because continuing to pour petrol on a fire is an obvious sign of insanity.

"Why don't they act? They are wedded to a corrupt political economy, centered in the City of London, that extracts vast profits from communities and nature, and depends on destructive economic growth for its survival.

"We need to tell the truth, humanity has to change course, we have no choice."

Campaigners held placards with messages including "Code red, where's the action" while four people were dressed as the sea in a warning over rising sea levels.

Extinction Rebellion vowed to return to the streets earlier this month following a string of victories in court which saw activists successfully appeal convictions for previous stunts.

Their latest protest comes after a major science review by the U.N.'s Intergovernmental Panel on Climate Change confirmed that human activity such as burning fossil fuels was unequivocally driving the climate crisis, with impacts such as deadly heat waves, floods and storms already being felt.

In November, the U.K. will host the international COP26 summit where the pressure will be on world leaders to increase action to urgently cut greenhouse gases and avoid even more dangerous global warming.