Hope fades for hundreds of whales still stranded in Australia 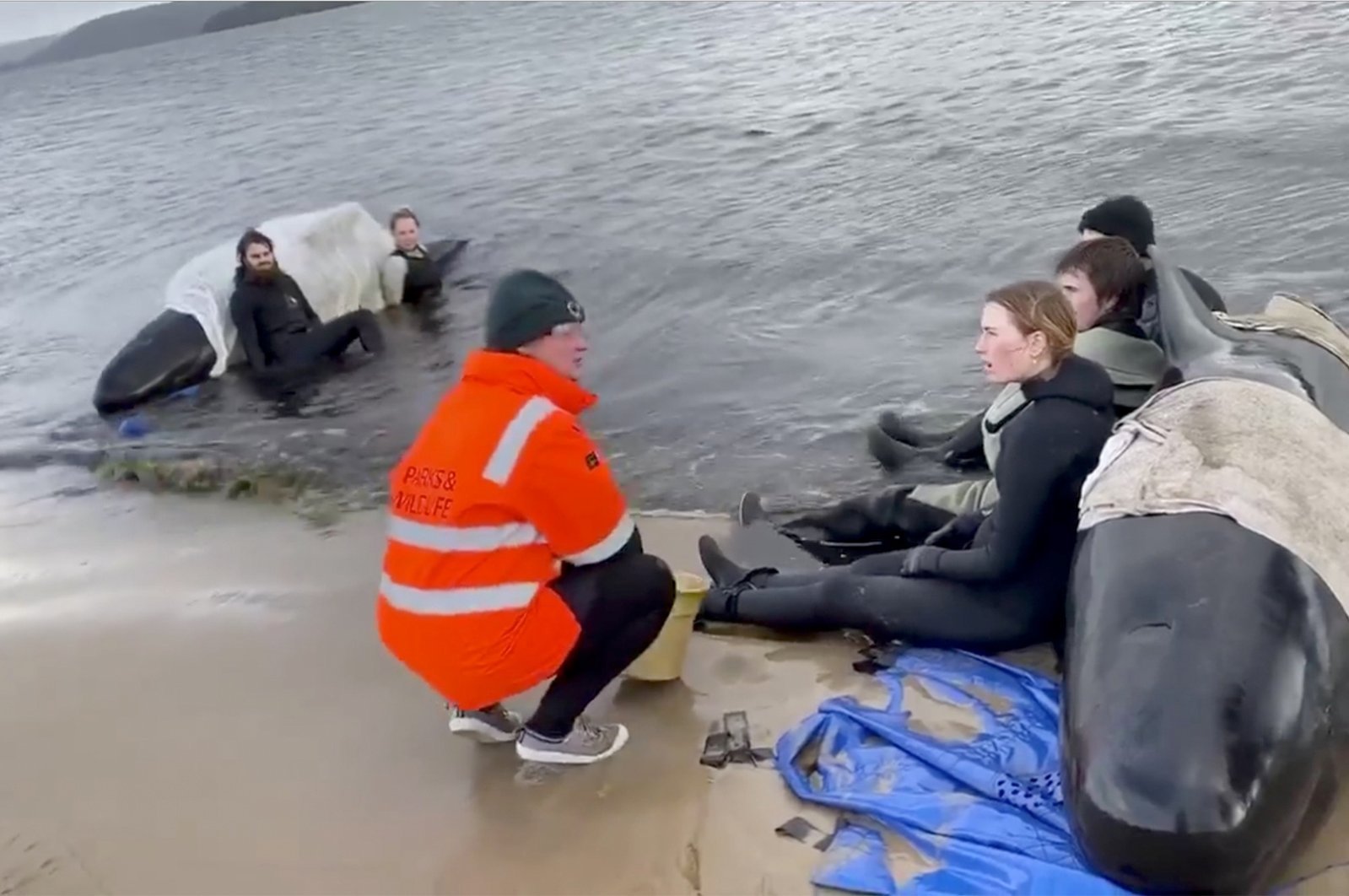 Only a few dozen of the 470 whales stranded on Australia's southeastern coast can still be saved, rescuers warned Thursday, as they weighed euthanizing those animals in most distress.

Around 70 of the creatures have survived, and the death toll is expected to rise as the window for rescue now begins to close.

"We've got about 25 animals that we think have the strength to be successfully released," said Tasmania's Parks and Wildlife Service manager Nic Deka, adding the "hard physical yakka (work)" of rescuers would continue until nightfall.

A crew of around 60 conservationists and skilled volunteers have spent days wading in the chilly water of Macquarie Harbour, surrounded by the anguishing cries of whales slowly dying.

"It is emotional," said rescuer Sam Thalmann. "We have people semi-submerged in the water, up to their waist or their chests."

"There are animals swimming around, they are vocalizing. We can see the bonds and the pairings within them," he added.

Pilot whales – which can grow up to 6 meters (20 feet) long and weigh a ton – are known to be highly social.

Some animals have resisted rescue or tried to return to their family after being freed, becoming beached for a second time.

Such is the level of distress that authorities said they are likely to carry out mercy killings of at least four whales.

"We're actually considering euthanasia at this very moment with a small number of animals that we've attempted to release and it hasn't been successful," said Tasmanian environment department marine biologist Kris Carlyon.

"That's based purely on animal welfare grounds," he said. "It's always something in the back of our minds, we go to it only when needed."

The crews are now focusing efforts on a group of 20-25 partially submerged whales, using boats fitted with special slings to guide them back to the open ocean.

But increasingly, attention is turning to how to dispose of the nearly 400 whale carcasses safely.

"We are starting to form up a plan. Our preference is for disposal at sea. We're still taking expert advice about where exactly the drop-off point may be," said Deka.

Left where they are, the whales would "bloat and float," causing a navigation hazard, polluting the bay and potentially attracting sharks and other predators, Deka said.

"The decomposition of such a large number of animals could actually affect oxygen levels in parts of the harbor, which could affect the marine life in those places," he said.

'Little we can do'

A resident and cruise-boat worker who gave her name only as Monique said the local community has been devastated by witnessing scenes of such anguish.

"It was really sad," she told Agence France-Presse (AFP).

"You could see that they were obviously suffering. On the beach they were still ... puffing, flipping about and you couldn't really do much to help them," she said.

The causes of mass strandings remain unknown despite scientists studying the phenomenon for decades.

Some researchers have suggested the pilot whales may have gone off track after being attracted to food close to the shoreline or by following one or two whales that strayed.

Marine biologist Carlyon said it was a "natural event" with strandings of the species regularly occurring in both southern Australia and neighboring New Zealand.

"We do step in and respond in these situations, but as far as being able to prevent these occurring in the future, there's really little that we can do," he said.