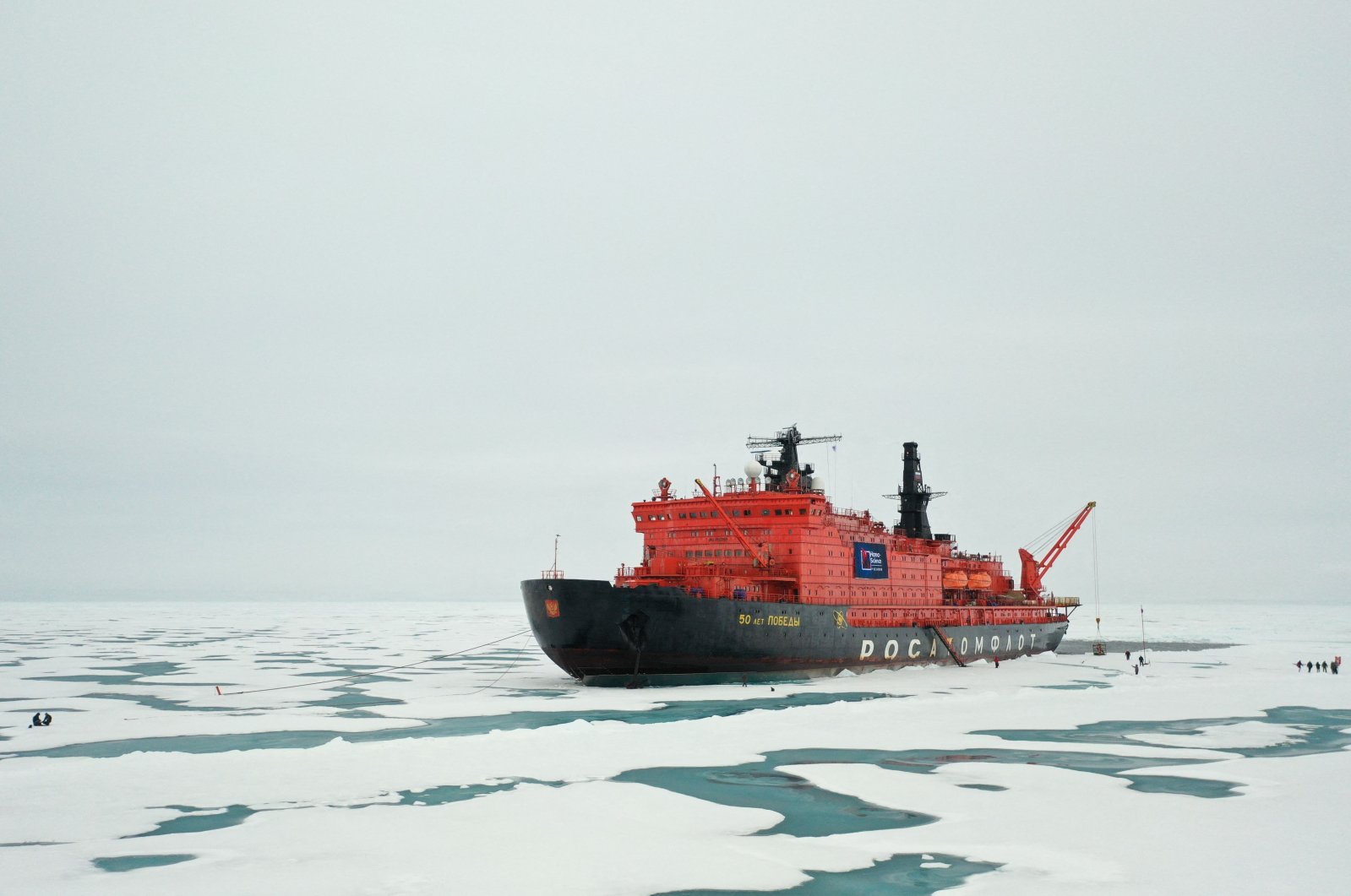 A massive Russian icebreaker ship clears a path to the North Pole, cutting through the thin ice of the Arctic Ocean. Even in this far-flung region, the impact of climate change can be seen.

Dmitry Lobusov has seen it. For 13 years he has captained the "50 Let Pobedy" ("50 Years of Victory"), part of a growing fleet of icebreakers that Russia is using to assert its power in Arctic waters.

The vast, nuclear-powered ships clear paths through the ice for commercial vessels, helping Russia to deliver its oil, gas and minerals to the rest of world, and eventually to set up an Arctic shipping route between Asia and Europe that Moscow has touted as a rival to the Suez Canal.

Lobusov, a 57-year-old with a gray beard who often has a pipe in hand, stares out from the bridge as the red-and-black ship plows forward, so silent you can hear the ice cracking under its hull.

After nearly 30 years at sea, much of it in the Arctic, Lobusov has seen firsthand the changes wrought by global warming.

"In the 1990s and early 2000s the ice was more difficult and thicker," said the sailor, his blue uniform immaculate.

"There used to be a lot of perennial ice," he said, referring to ice that forms on the surface of polar oceans and survives for multiple melting seasons.

"We hardly see that kind of ice anymore," added.

Perennial ice is thicker and stronger because it forms over several years and loses salt, Lobusov explains, making it harder for the icebreaker to cut a path. But today, most of the ice cover is formed during the year and quickly melts in the summer.

Scientists say there is no doubt that this is climate change at work.

Russia's Rosgidromet meteorological service said in a report in March that the Arctic ice cover is now five to seven times thinner than in the 1980s, and in the summer months the waters are becoming increasingly free of ice.

Russia, a third of which is within the Arctic Circle, is warming faster than the global average, it said, with temperatures having risen by half a degree per decade since 1976.

Long a skeptic of climate change, President Vladimir Putin has changed course in recent years, ordering his government to develop a plan to cut carbon emissions to below the level of the European Union by 2050.

As wildfires raged in Siberia this summer, Putin said he was alarmed by a series of "absolutely unprecedented" natural disasters in Russia.

Viktor Boyarsky, a 70-year-old seasoned Polar explorer who was traveling aboard the icebreaker, admits that global warming exists. But he says human activity "does not play a key role" and that its effects are not irreversible, despite the abundance of evidence to the contrary.

The former director of Russia's Arctic and Antarctic Museum, Boyarsky said the region is stuck in a vicious circle as retreating ice cover allows the warmer waters of the Atlantic to enter the Arctic basin.

"It's a chain reaction process. Less ice means more water and more heat," he said, standing in the mist that envelopes the ice shelves of the North Pole.

'We are just guests'

After his many years at sea, icebreaker captain Lobusov said the changes in the Arctic are undeniable.

Along with the thinner Arctic ice, he said the North Pole is now covered in fog in the summer.

"I think it's also the effect of warming, there is more humidity in the air," he said.

He has also seen glaciers shrinking in the Arctic, like on the Franz Josef Land archipelago of more than 190 islands.

"Many glaciers are receding toward the center of the islands from where they are on the map," he said.

"There are no questions here, without a doubt this is the effect of the heat."

Lobusov's "50 Years of Victory" – part of a fleet of icebreakers operated by state atomic energy corporation Rosatom – has reached the North Pole 59 times and on this trip is carrying a group of teenagers who won a contest to travel aboard.

As the 160-meter (525-foot) ship passes off the coast of Prince George Land – an island in the Franz Josef Land archipelago – a polar bear wanders across the ice, watching the vessel.

"The bears are the bosses here, this is their home," Lobusov said. "We are just guests."