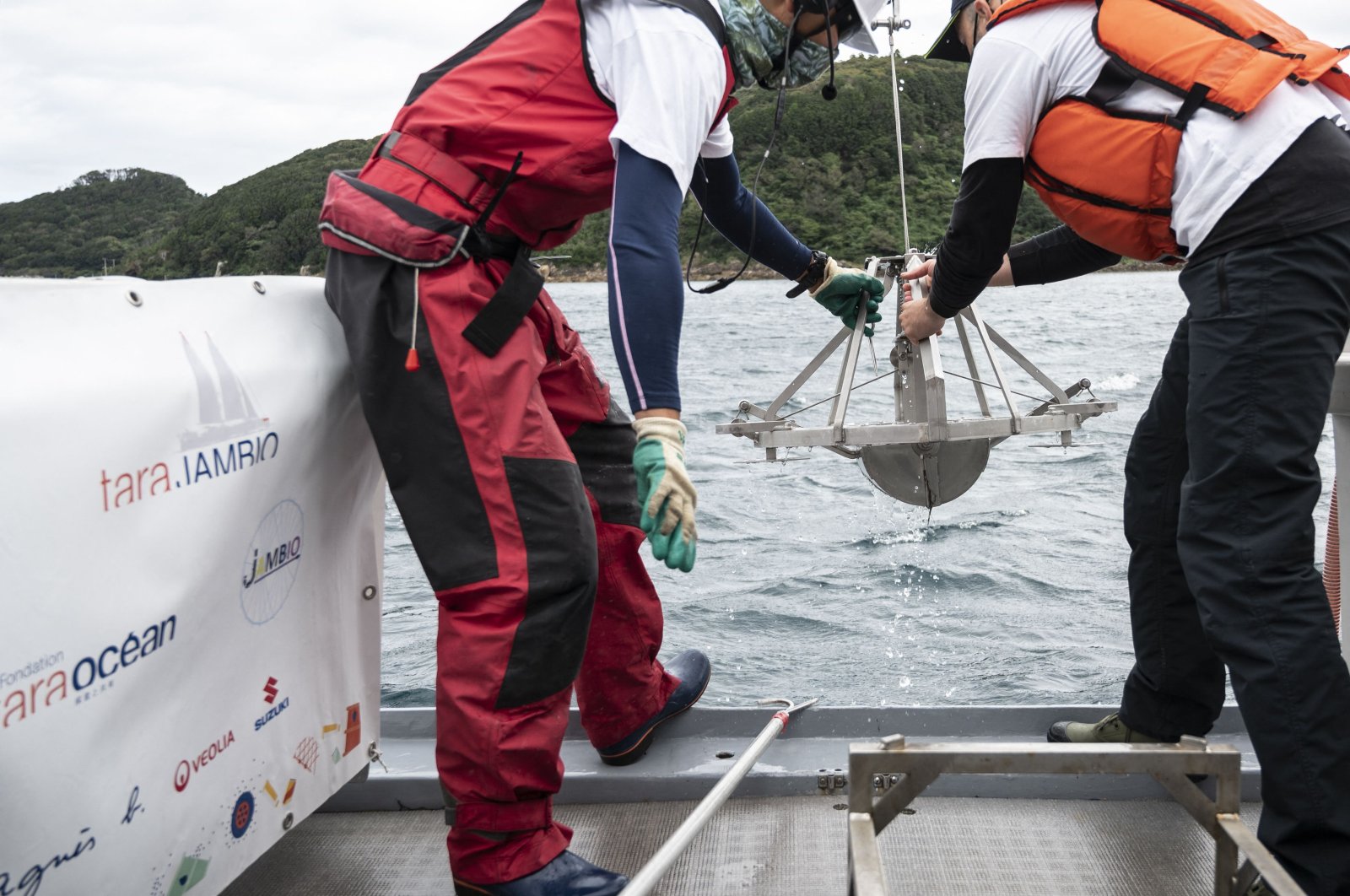 Researchers pull out a "Smith-McIntyre" grab machine collecting sediment samples during a joint project of the French Tara Ocean Foundation and Japanese marine-station network Jambio, on board a boat off the coast of Shimoda, Shizuoka Prefecture, Japan, Oct. 14, 2021. (AFP Photo)
by French Press Agency - AFP Oct 25, 2021 9:54 am
RECOMMENDED

A boat with scientists is floating in seemingly clean waters off Japan's Izu peninsula. The boat's crew casts a net into the water but not to catch fish – the researchers are collecting microplastics to learn more about the pollution's impact on marine life.

Tiny floating fragments from plastic packaging, synthetic clothing and fishing nets have proliferated over the past four decades and are now found in every part of the world's oceans – even the deepest trench.

The planet's seafloor is littered with an estimated 14 million tons of microplastics, according to a study released last year, and scientists say more research on them is urgently needed, including their effect on ecosystems, the food chain and human health.

So a team of French and Japanese researchers is analyzing samples from the archipelago's coastal waters to study how microplastics make their way into the sea, and how much seeps into the ocean floor.

They are also examining the so-called "plastisphere," where micro-organisms live among discarded plastic.

"It's a new ecosystem that didn't exist before the 1970s. So we don't really know which types of microbes are associated with this plastic," Sylvain Agostini, scientific director of the Tara-Jambio project, told Agence France-Presse (AFP).

Having left the funnel-shaped net nicknamed "the sock" to drift for 15 minutes near the surface, the crew hoisted it back on deck to inspect their catch.

"This blue stuff is microplastics, and that's polystyrene, I believe," Agostini said.

They have collected more than 200 samples since their study began in April 2020, all of which contain microplastics.

Jonathan Ramtahal, a student from Trinidad and Tobago taking part in the research, said the team aims to determine whether the bacteria they find is "harmful to the wider food chain."

"Is it something we should be worried about – do they transport any vectors for diseases? The diversity of bacteria can give us an idea of how it changes in different environments," he said.

Other studies have shown that microplastics have infiltrated the planet's most remote regions, and France's Tara Ocean Foundation has previously researched them in the Mediterranean and large European rivers.

Now the foundation is in Japan, the second-biggest producer of plastic packaging waste per capita, according to the United Nations.

The Japanese government says its vast waste management scheme stops plastic from finding its way to the sea, and industry research shows 85% of plastic waste in Japan is recycled – although much is burnt for energy, emitting carbon dioxide.

Keiji Nakajima, director of marine plastic pollution control at the environment ministry, said Japan's waters are also affected by the waste of its neighbors.

"Japan's streets and streams are cleaner than those of other countries," he said.

The nation sits "downstream of a major oceanic current that sweeps in plastic waste produced in Southeast Asia and China," Nakajima added.

A 2018 U.N. report named the United States as the biggest generator of plastic packaging waste per capita, with China the largest overall.

Agostini, an assistant professor at the University of Tsukuba northeast of Tokyo, said that while "there is some truth" in this explanation, it is not watertight.

When plastic waste is found at a river's estuary or a secluded bay, it's clear that "it doesn't come from thousands of kilometers away," he said.

The Tara-Jambio project is unlikely to settle that debate when its findings are published in several years' time, but Agostini argues that if even a small proportion of Japan's plastic waste seeps into the ocean, it is still an "enormous quantity."

Japan is taking small steps to reduce its reliance on plastic: in 2019, it set a target to recycle 100% of new plastic by 2035, and last year, stores began charging for plastic bags.

"Packaging habits are ingrained" in Japan, said Kazuo Inaba, head of the Japanese marine-station network Jambio, but he and the team say change is necessary.

"If developed countries don't lead by example, no one will do it," Agostini said.