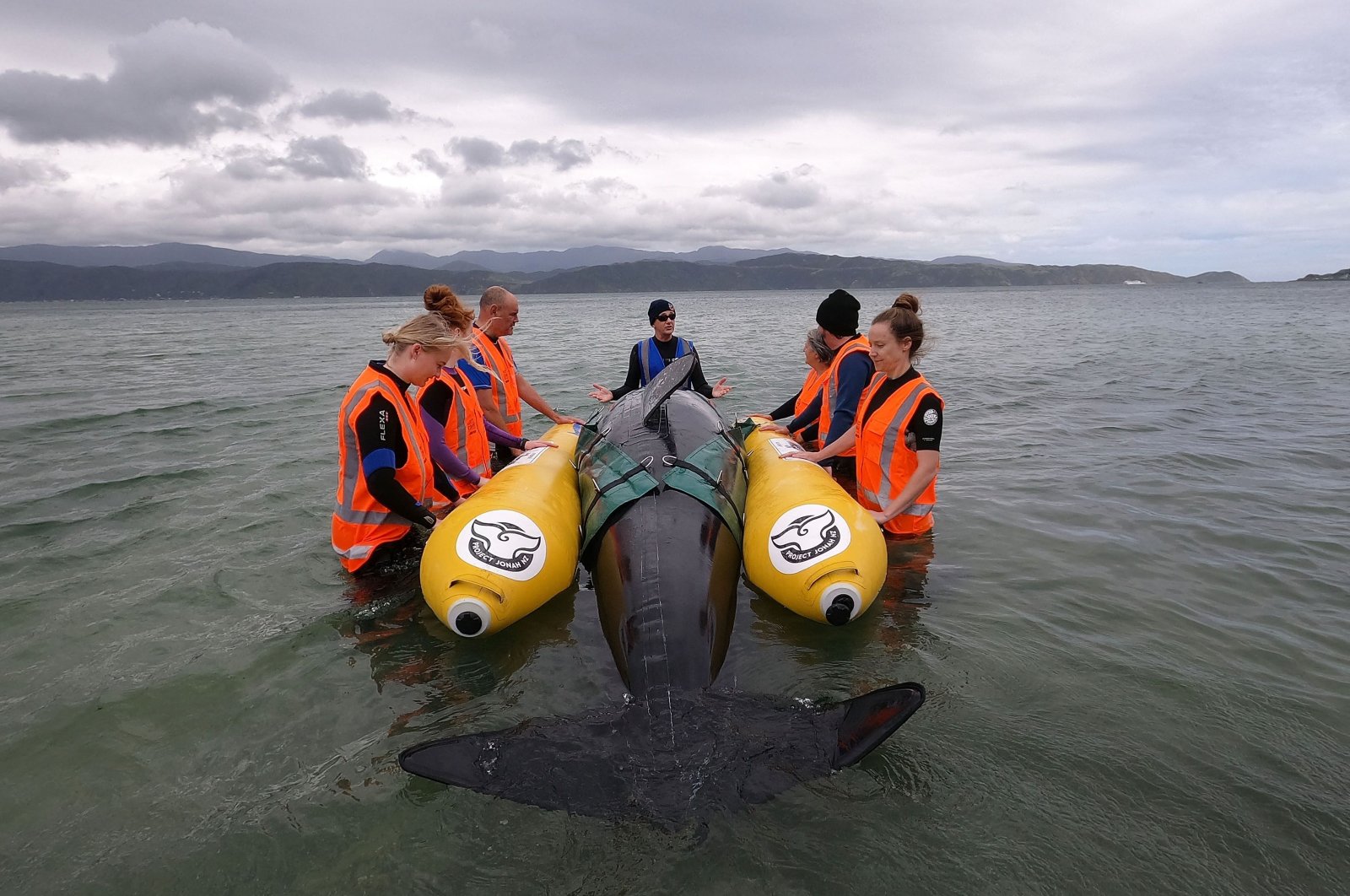 A group of volunteers from New Zealand whale rescue charity Project Jonah are taught how to save a stranded whale by a group instructor, at Scorching Bay in Wellington, Dec. 11, 2021. (AFP Photo)
by French Press Agency - AFP Dec 20, 2021 11:54 am
RECOMMENDED

A two-ton rubber whale can take on a life of its own in the frigid shallows of a windswept New Zealand beach, particularly when a bedraggled group of would-be rescuers is trying to wrestle it into a harness.

"Keep the blowhole clear ... you're too close to the tail, one swipe can do a serious injury to yourself and the whale," an instructor yells as the Wellington rain lashes his pupils.

Despite the discomfort, enthusiasm levels remain high as the group successfully maneuver the five-meter (16-foot) long pilot whale replica onto a mat between two inflatable pontoons.

Filled with water, the latex marine mammals help teams prepare for real emergencies – New Zealand has one of the highest whale stranding rates in the world.

Around 300 animals beach themselves annually, according to official figures and it is not unusual for groups of between 20 and 50 pilot whales to run aground.

But numbers can run into the hundreds when a "super pod" is involved – in 2017, there was a mass stranding of almost 700 pilot whales.

"There are always going to be strandings – there was one on Monday, there'll probably be one next week," Project Jonah's communications manager Louisa Hawkes told about 30 trainee whale medics during a course in Wellington.

The wait turns out to be considerably shorter, with a baby pilot whale found stranded near Christchurch that same morning.

As the course continues in a community hall, a Project Jonah coordinator paces outside giving advice via mobile phone to wildlife rangers at the opposite end of the country desperately trying to save the animal.

Sadly, their efforts prove futile and the infant is euthanized a few hours later when its pod cannot be located.

"Strandings are incredibly emotional," Hawkes tells the volunteers. "If a whale isn't refloated it can really, really hurt, particularly if you've bonded with it.

"You need to ensure you have the resilience needed to cope with whatever's going to happen."

No one knows why whales strand but Hawkes said it sometimes occurred when old, sick or injured animals swam ashore and other pod members followed.

She said one orca, a male named Nobby, had been rescued on seven separate occasions from North Island beaches after beaching himself chasing stingrays for food.

Most mass strandings in New Zealand involve pilot whales on gently sloping beaches, which confuse their sonar, making them think they are in open waters.

Other pod members then beach themselves trying to respond to the trapped whale's distress signals.

The South Island's notorious Farewell Spit, a 26-kilometer (16 mile) hook of sand that protrudes into the sea, has been the scene of at least 10 pilot whale strandings in the past 15 years.

"It's what we call a perfect whale trap," Hawkes said.

Many stranded whales are found to be malnourished because their stomachs are full of plastic pollution, while explosions from undersea mining and naval exercises have also been linked to groundings.

Project Jonah was established in 1974 and is regarded as a world leader in whale rescue, helping train New Zealand's conservation department and police in what to do when strandings occur.

The charity has a network of 4,000 volunteers it can mobilize during mass standings, most of them ordinary people who have undergone basic training in becoming marine mammal medics.

"I'm an ocean swimmer and I've come across lots of dead whales – I want to know what to do when there's a situation where there is a chance of rescuing them," Wellington-based school teacher Leonora Hoke explained when asked why she took the course.

Aside from the emotional toll, Project Jonah warns that whale rescue involves numerous physical risks, including possible injury from the thrashing animals.

The whale's blowhole expels bacteria and fungi, while the water around the stranded animals is soon contaminated with faeces and blood, the latter of which can attract sharks.

Even dead whales pose a hazard because their bellies fill with gas as they decompose, and can cause the carcasses to explode.

Hawkes, a former youth worker who has been involved with Project Jonah for nine years and lost count of the animals she has saved, said it was worth it to see a stranded whale swimming off into the distance.

"It's one of the most enriching, rewarding experiences of your life – it's something that will touch you," she said.

"To be able to help out these marine mammals at the most stressful moment of their life is an absolute privilege."