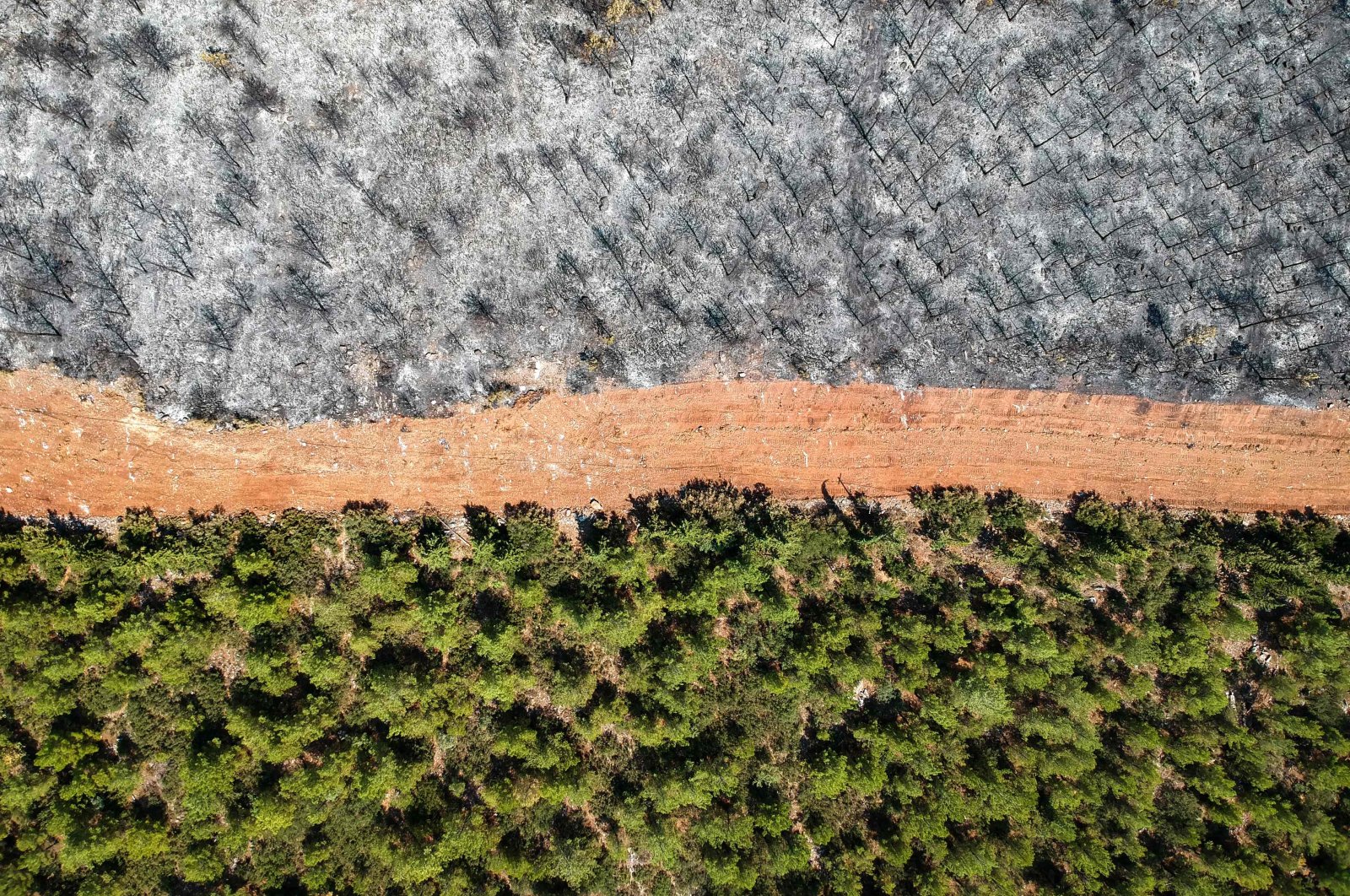 An aerial picture of a track separating burnt trees from a lush, untouched forest in Muğla, as the country struggles against its deadliest wildfires in decades, Muğla, Turkey, on Aug. 7, 2021. (AFP Photo)
by Anadolu Agency Aug 11, 2021 9:44 am
RECOMMENDED

Amid the climate crises taking over the planet, Turkey is trying its best to curb the problem; however, climate change seems to be winning the fight.

Global climate change will affect Turkey just like every other country around the world. Even after the end of this century, it could lead temperatures in Turkey to rise as much as 6.5 degrees Celsius (43.7 degrees Fahrenheit), warned a scholar from the Turkish capital Ankara on Tuesday.

"Global warming, as confirmed in the new U.N. climate report, will continue in the coming decades and, based on all-new Intergovernmental Panel on Climate Change (IPCC) scenarios, will continue beyond 2100," said İsmail Yücel, a civil engineer who studies climate change at Ankara's Middle East Technical University (METU), speaking on the “Climate change widespread, rapid, and intensifying” report released Monday.

Assessing the effects of climate change in Turkey in light of the report, he said that with climate change, the air’s capacity to retain water vapor had risen some 7%.

“In our rapidly warming world, the average rainfall is expected to have high spatial variability, while many regions will experience intense short-term extreme rainfall events with growing frequency,” he said, pointing to coming increasingly extreme weather.

“This condition is caused by an increase in specific humidity and the transport of higher amounts of moisture from tropical regions.”

Recent climate simulations show Turkey's summer drought is expanding into fall by up to 30%.

“The eastern Black Sea region and northeastern Anatolia are positively separated from southern Turkey by rising rainfall in the coming period during the winter and spring seasons,” he said.

“According to moderate and pessimistic scenarios, the amount of warming observed in the summer will reach record levels between 3.5 and 6.5 degrees Celsius at the end of the century in Turkey’s Western Mediterranean, inner Aegean, and southern regions,” he added, pointing to temperature changes that would leave the world drastically altered.

“This would increase the risk of drought, leading to more frequent heat waves ... (when) extreme temperatures last at least three days in a row, (which) would also increase the risk of fires occurring in the world and in our country,” he explained – a timely warning considering this year’s record-breaking amount of forest fires worldwide.

Pointing out that Turkey’s coastal regions get much more precipitation than inland areas, Yücel said that abnormal sea level temperature changes observed in the Mediterranean and the Black Sea also cause flooding in these regions, moving the effect of heavy rainfall events from coastal areas to inland areas and higher elevations.

“With global warming, extreme weather events that usually last only a few minutes can now last for a few hours," he stressed, adding that this situation also brings with it the risk of landslides, especially in the eastern Black Sea region.

“The current use of renewable energy sources, such as wind and solar energy, should continue to grow,” he urged as one way to cut emissions of greenhouse gases.