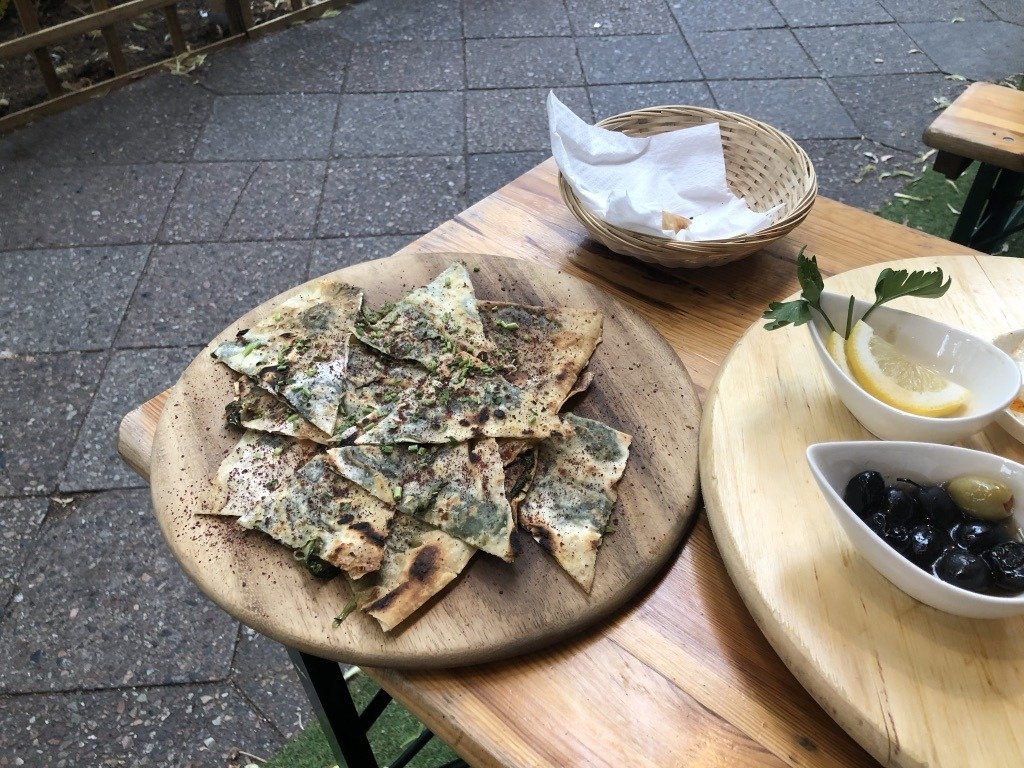 Cafe Lemon has a strong and diverse sampling of meze appetizers along with old country favorites like savory gözleme pancakes. (Matt Hanson for Daily Sabah)
by Matt Hanson
Jul 14, 2021 8:13 am

A quiet, easygoing cafe and delicatessen on Wühlischstraße in Friedrichshain, Berlin has a strong and diverse sampling of meze appetizers along with old country favorites like savory gözleme crepes

There’s a certain comfort in speaking a foreign language over food in a country where neither the food nor the language are part of that nation’s founding culture, but are the result of measures of inclusivity that, whether by force or diplomacy, have changed the social fabric and daily life of all who pass through. That is the quiet pleasure of speaking Turkish in Berlin, where so many businesses – restaurants in particular – are run by Turks who, in the absence of English, would be glad to exchange words in their mother tongue while bookending their greetings with a smattering of local German.

Within the heavily gentrified environs of Friedrichshain, one eatery stands out for its preparation of Turkish specialties with a modest, though potent grab. The meze appetizers of Lemon Deli encompass a broad diversity of dairy-rich and spice-laden delicacies that put a light, subtle spin on the usual fare of its kind as it's generally enjoyed back in Turkey. One such is the yogurt-based “haydari," which, at Lemon, has a special tang, refreshing especially during summer even under cooling overcast skies of the north European latitude. And when paired with the house “sarma,” stuffed grape leaves, the effect is transporting.

Among its plentiful selection of appetizers, Lemon Deli purveys a particularly fantastic red pepper spread emboldened with crushed walnut both infused throughout, thickening its consistency with the nutritious brain food, and crushed on top. It goes perfectly well with the simple strips of warmed bread, served as cut from the sides of a holiday “pide.” The mixtures of olives at Lemon are perhaps not the very best, though in lieu of saltier varieties theirs are fresher, and like the “sarma,” have an aged, dried quality. That, however, is not the case with their “kısır” bulgur salad, which is decidedly flavorful.

According to the context of a mainstream German palate, Lemon might be, to some, more bland than how its cuisine, marketed as Mediterranean, would generally be cooked in Turkey. It is the unpretentiousness of the place that reinforces its charm, however, as its indoor salon has those characteristic wooden tables and benches covered in textiles reminiscent of Anatolian heritage. A woman and a young man can be heard conversing inside in Turkish, heated by the drama of their daily lives as a kind, helpful fellow behind the counter doles out generous heaps of meze to a Turkish-speaking American traveler.

While the customary Istanbul-style appetizers at Lemon are palatably most pleasant, the talents of their cultural exports shine with unrivaled and surprising freshness in how they make gözleme, the savory crepe often filled with crumbly “lor" cheese, potato or greens like dill and parsley. The streets of Friedrichshain are arguably ideally suited to refashioning that time-honored recipe, which, as country fare, for example in the villages of the Aegean region, assumes a more dehydrated, brittler form, mostly cooked on belly-shaped oval stovetops in the open air.

Lemon’s gözleme is crispy though far from desiccated, as fine oils saturate its flatbread like a thin crust, dusted with a zaatar spice blend of the Turkish variety. And when pressed with layers of spinach leaves and white cheese comes to round out its textural perfection with irresistible delectation. The kitchen is friendly to wholesome adaptations of the historical diet under question. Their vegetarian and vegan mantı raviolis, complete with soy yogurt, demonstrate a bold, responsive culinary momentum that embraces change in concert with their pluralist surroundings.

In business and flourishing since 2016, and having survived two lockdowns in the midst of Germany’s relatively intelligent virus immunity policies, Lemon Deli appears to be surfacing from pandemic restrictions with a healthy uptick. Their manifold menu stands ready for a craving any time of day, from their breakfast special of "menemen," a tomatoey egg dish, complemented with a European twist of gouda, to a smorgasbord of antipasti in differing assortments according to the hour, whether for takeaway or at their lively spot, animated by a constant flow of foot traffic ideal for Berlin's favorite pastime of people watching.

While accommodating to the growing trend for people to become herbivores, which is taking hold among progressive global youth, Lemon retains the popularly carnivorous conventions maintained by Anatolian cooks. Prominent is the mincing of meat, specifically beef, as filling to accompany the ancient practice of hand-rolled dumplings known as “mantı.” And so as not to step on the tongue of the largely tepid German cooking, it is offered both with and without the liberal dosage of garlic commonly added from Thrace to Hatay and beyond, connecting Turkey with its Turkic roots through food.

It is the explicit profession of Lemon that, by way of cooking, they are exercising a form of cultural exchange, practically universal in its outreach. Their kitchen identifies with the Aegean and Mediterranean regions chiefly. Among their dishes is a Turkish version of moussaka, which, although associated with Greek dining, is, in fact, as traditional to kitchens throughout Turkey and the Arab world. The main difference is essentially that Greeks make it with a milk-based custard and serve it hot, while Turkish cooks have primarily simmered a tomato base for their sauce and serve it at room temperature.

The beauty of Lemon is that they frequently prepare much more than just the staple dishes that anyone from Turkey, or who has visited, will know and love immediately. They are a family-style, humble outfit with a panache for newness and fusion, unafraid to peer out from the edge of those culinary routines that might translate to mediocrity if they are not approached with a creative imagination and alternative perspective. By eating their food it is truly tastable how well the Turkish kitchen thrives on the streets of Friedrichshain, though not without a touch of nostalgia that remains one of its stubbornest cultural signatures, at home and abroad.