Growing up Turk-lish: And the surprising ways we differ 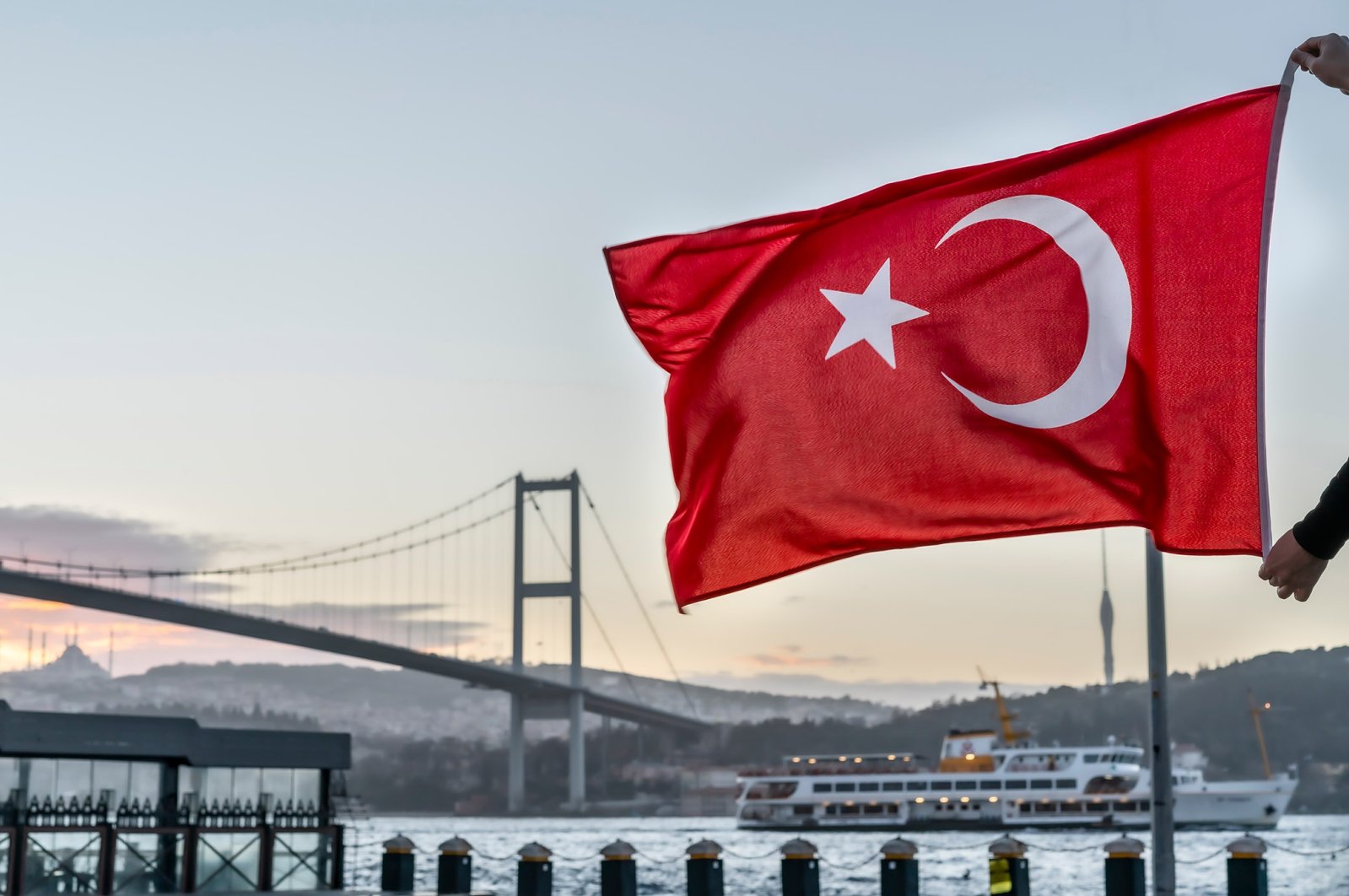 A man holds a Turkish flag in front of the 15th July Martyrs Bridge in Istanbul, Turkey. (Shutterstock Photo)
by Leyla Yvonne Ergil Jan 11, 2022 10:52 am

There are many expats out there like me that feel strange using the term "expat" itself. That can be said about foreigners from other nationalities that could fall in other categories, but it is also true for us half-Turks out there, split between this country we hold so dear and the different customs of the West or beyond we have also become accustomed to.

Whether you were brought up abroad or in Turkey, if you have a Turkish parent – especially a dad – you are pretty much considered a Turk. I was born to a Turkish father, who was living in the U.S. and had naturalized years before my birth, and a British mother, but grew up in California. Since my early childhood, I would spend the school year in Los Angeles, summers in Turkey and the Christmas break in the U.K. My life has always been divided between three cultures and many will know my accents and languages switch back and forth constantly to prove it.

As an “expat” living in Turkey tasked with the proud mission of introducing Turkey to expats and expats to Turks, I am constantly contemplating the differences between the Turkish and American and Western cultures I am more familiar with. But there are also certain nuances that pertain particularly to those like me, the children of Turkish and foreign couplings resulting in a heritage and culture that I like to call “Turk-lish.” If you are one of us half-Turks, you will understand.

The ways we differ

The bottom line is: If you are a Turk in any other part of the world other than Turkey, you stand out in a good way for that characteristic alone. Meanwhile, in Turkey despite being considered a Turk, you are always considered a “yabancı,” which is the Turkish word for foreigner or stranger.

Turks will regularly point out to others if someone has a foreign parent. In America, especially if you are born there, everyone blends in as most Americans are actually from somewhere else. One of the major ways being half-Turkish benefited me was the country’s straddling of two continents, which resulted in others of heritage from either one feeling a special bond. Together, we connected by the sheer virtue of having a shared ancestry with what seemed like a far-off place in the world.

In England, I always felt like a wild child, compared to all of the extremely polite, quiet and “properly” behaving Brits among me. I loved them and yearned to be like them, don’t get me wrong. But, I always felt like an outsider asking too many questions, talking too loud and using up too much water, literally. But, Brits also seemed somewhat fascinated by me, whether it be the U.S. connection or Turkey – I remember spending a day in an English middle school and being the center of attention for these reasons alone. I even walked away with pen pals! I also visited Ireland multiple times, as my grandfather Terry, the dear soul, was from county Leitrim in the north. There, I remember fellow Irish folk praising the Ottoman Empire for sending food supplies and aid during the infamous potato famine in the country.

When I traveled to places like Spain, the Netherlands and Tunisia, it was my Turkishness that made me special. I remember vendors in a Tunisian market yelling down the street that a "Turk" was approaching. Even in Mexico, although I could speak Spanish before I learned Turkish, the locals would be especially welcoming and interested when they learned I was a half-Turk!

We live with multiple languages

Despite my father being a language professor, he actually intentionally did not begin to teach me Turkish until I was around 15. As many will know, most children of mixed heritage learn multiple languages much earlier in life. Even I am amazed at how young such children can switch back and forth between languages, although I can now do it too. As if the challenge of having to instantly switch between languages isn’t enough, just imagine what it must be like to have to constantly act according to two vastly different cultures with their own sets of traditions. From being pinched on the cheek as a child here to hugging as a greeting in the U.S. to kissing people once in England to doing it twice in Turkey and kissing elders’ hands, knowing when to use formal tone or not when speaking, all of these nuances are yet another language people of blended heritage have to learn.

Religion, holidays and traditions: We get them all

While we are lucky that we get to celebrate all of the wonderful holidays both Turkey and the Western world commemorate, it can get overwhelming and not be as symbolic as it is to our parents. After you have seen a bustling Istanbul operating as usual on Christmas Day, the novelty of Santa (despite this being his birthplace) and all of the pressures involved with the holiday – financial or otherwise – can become trying. While Christian holidays such as Easter and Christmas may not be the same here in Turkey, the Islamic religious holidays we have here may also seem foreign. One parent may have rooted memories with one culture’s holiday and the other another, which leaves us with the task of deciding how best to celebrate either.

We have the best of both worlds when it comes to religion, which, let’s admit, is an integral part of our civilization’s history whether we are pious or not. This is the reason I took courses such as Islamic History, the Quran and Arabic in grad school. Plus, I loved the script and have so many Ottoman texts left by my father I hope to transcribe. Our family has a long line of ancestors that served as generals (paşas) during the Ottoman era, imparting a strong military heritage to the mix. In the U.S. and England, I would jump at the opportunity to go to church, as to me it seemed like a sing-along and I loved the echoing architecture. At home in the U.S., when I missed Turkey, I would play a recording of the Islamic call to prayer, known as the adhan, my father asked the local imam to make for me.

We are funny with money

Turkey has a truly unique relationship with money. Anyone who has ever tried to catch the attention of a waiter to pay your bill here in Turkey knows it can be nearly impossible to get change for any slightly big bill. In L.A., my mother had a cafe and I remember having to ensure we had a register full of change ready before the day even started. From the custom of having to pay rent to live in your own home from the age of 18 upward, something more prevalent in the West, to being able to live out your adulthood for free in your parent’s home in Turkey, when it comes to money, the lines can be blurred. Turks comfortably ask for loans and will reciprocate if they can. They may pay for your meal but not even thank you if you pay for theirs. The culture around money here in Turkey is different, which means there are certain nuances we have to learn to accommodate for both. A lot of Turkey’s laissez-faire attitude toward money is the fact that they don’t make it the primary part of their lives. Turks are fluid when it comes to money and have a lot of pride, so in many cases any discussion about money can be pushed to the wayside.

Historically, Turks have always been more relaxed with money and concepts such as shops giving you things on credit (referred to as "veresiye") and donating to pay ahead for a meal for someone less fortunate ("askıda") are regular practices here in Turkey. You can actually make it through a majority of the day here in Turkey without having to physically pay for anything if you have the right relations established with your locales.

Where is 'home sweet home'?

In Turkey, we may always be perpetual foreigners, but if you are reading this now, chances are you have chosen to live here, like me, for the vast benefits we know this country has to offer. I truly believe that having the perspective derived from visiting a variety of countries allows you to clearly see the benefits of the one you live in. For me and many like me, this is Turkey. I am so concrete in the knowledge that I am where I want to be right now, in a village off Turkey’s southern coast, despite growing up in Los Angeles and having lived in multiple countries around the world. When Turks ask me how I could leave L.A., I tell them all of the reasons why. I then commend their drive to go for themselves, because I know it will be an opportunity to better understand just how high a quality of life Turkey has to offer. Most foreigners don’t need to ask why I live in Turkey, as those here and abroad always seem to understand.

How we stand out

We may never feel like we have a true home or heritage and that ours is a life of being a perpetual foreigner, but trust me: This makes us interesting. I had the fortunate opportunity to attend one of the most beautiful schools in the world, the University of California at Santa Cruz, where I studied cultural anthropology. As famous surfers break in the Pacific Ocean nestled between redwood pine forests, this school was truly special. Despite being one of the top state colleges in the country, the school’s philosophy was to have no competitive sports and to not hand over grades. Instead, each professor was tasked with writing a letter about you for each course of theirs you attended. Needless to say, I stood out. Those letters would open the door to graduate school in Middle Eastern Studies and the Fulbright Scholarship that facilitated my forever move to Turkey.

Nonetheless, it was also in Santa Cruz where my Native American anthropology course professor told me I had stories to tell and a special style of telling them. That was a turning point in my life as I made it my mission – and here we are with me telling this story to you today.