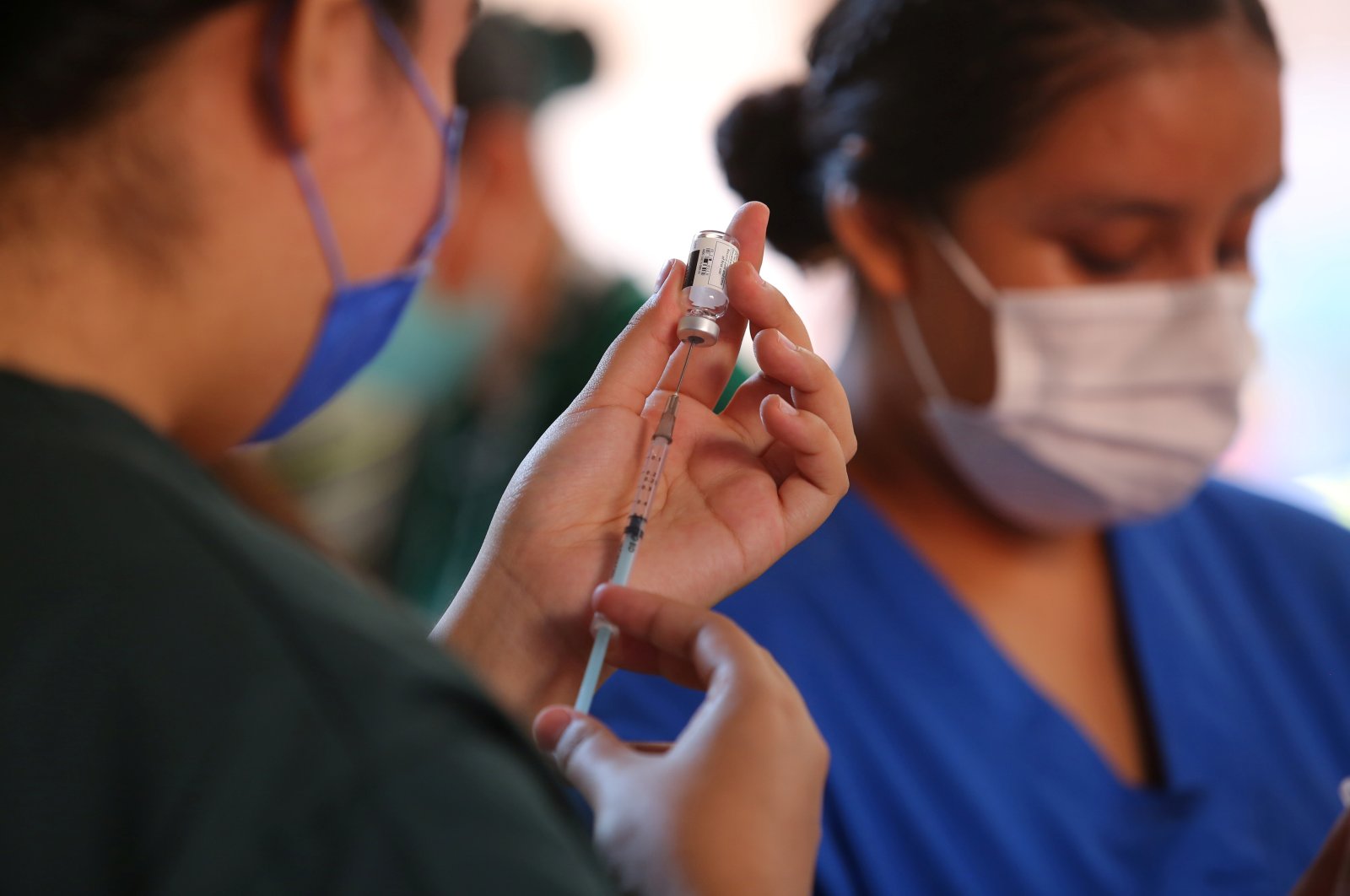 Health care workers prepare Johnson & Johnson vaccines against COVID-19, as part of a government plan to inoculate Mexican border residents on its shared frontier with the United States, in Tijuana, Mexico, June 17, 2021. (Reuters Photo)
by REUTERS
Jun 20, 2021 10:00 am

This week's roundup of the latest scientific research on the novel coronavirus and efforts to find treatments and vaccines for COVID-19 suggest that some lymph node cancers limit COVID-19 vaccine responses and that children with COVID-19 may be as contagious as adults.

An antibody cocktail from Regeneron Pharmaceuticals Inc and Roche showed benefits for a wide range of COVID-19 patients, from those without symptoms to hospitalized patients whose immune systems have not mounted a natural antibody response to the virus, two research teams reported on medRxiv ahead of peer review.

The cocktail, REGEN-COV, is already being used intravenously in the United States to keep symptomatic COVID-19 patients out of the hospital. In a large new trial in the U.S., adults and adolescents who tested positive but were without symptoms, researchers compared the effects of a single under-the-skin injection of the drug to a placebo. The results, released Monday, showed the treatment cut patients' risk of developing symptoms by 32%. It also reduced the amount of virus patients carry, said study leader Meagan O'Brien of Regeneron.

When symptoms did develop, they resolved five-to-six days faster with the drug. No one who got the drug required an emergency room visit or hospitalization, compared to six people in the placebo group. In a separate study from the U.K. released Wednesday, intravenous treatment with REGEN-COV reduced the risk of death in hospitalized patients whose immune systems had not produced antibodies to the coronavirus. Treatment also shortened these patients' hospital stays and reduced their odds of needing mechanical ventilation. No benefit was seen, however, in patients who already had their own antibodies.

Some patients with lymph node cancers will have good antibody responses to COVID-19 vaccines, but others will need further protection, according to new data. The U.K. PROSECO study tested antibody levels in 129 lymphoma patients after their first and/or second dose of the Pfizer/BioNTech or AstraZeneca vaccines. Responses were mixed, researchers reported Saturday on medRxiv ahead of peer review.

Patients vaccinated during or within six months after treatment for their blood cancer were unlikely to develop good antibody responses, researchers found. These patients need to be revaccinated, said study leader Dr. Sean Hua Lim of the University of Southampton. Among patients who had never received treatment, or who had completed treatment more than six months prior, those with curable lymphomas responded well to the vaccine.

All five with Hodgkin lymphoma, and seven of eight with aggressive B-cell lymphomas developed strong antibody responses. But 18 of 36 patients with incurable indolent lymphomas, like follicular lymphoma, had lower antibody levels than other patient groups. For these patients, "further measures such as boosting with a different vaccine, or prophylactic treatment with antibodies should be considered," Lim said.

Coronavirus may have been in US in late December

At least seven people in five U.S. states were infected with the novel coronavirus weeks before the states reported their first cases, a large government study suggests. Researchers who analyzed more than 24,000 blood samples taken for a National Institutes of Health research program between Jan. 2 and March 18, 2020 found that samples showing antibodies to the coronavirus came as early as Jan. 7 from participants in Illinois, Massachusetts, Mississippi, Pennsylvania and Wisconsin.

They do not know whether people with positive samples became infected during travel or while in their own communities. They do know, however, that people with antibodies were likely exposed to the virus weeks before their sample was taken, as antibodies do not appear until about two weeks of infection, according to a report published on Tuesday in Clinical Infectious Diseases.

The data suggest the virus was in U.S. states far from the initial hotspots and areas that were considered its points of entry into the country, the authors said. The researchers followed U.S. Centers for Disease Control and Prevention (CDC) guidelines for minimizing false-positive results. Experts not involved in the study said more research is needed to confirm that the positive early samples are not due to common cold antibodies.

Flu shots, COVID-19 vaccine can be given together

People may be able to get an annual flu shot and a COVID-19 vaccine at the same time, a U.K. study suggests. The 431 study participants all received influenza vaccines manufactured by Seqirus, a unit of CSL Ltd. They also received either the not-yet-approved COVID-19 vaccine from Novavax Inc, which has been highly effective in clinical trials or a placebo.

The results, posted Sunday on medRxiv and submitted for review to The Lancet, suggest the two vaccines do not interfere with each other. The efficacy of both the influenza vaccine and the Novavax vaccine "appeared to be preserved," Seqirus said in a statement. "No additional safety concerns were found with co-administration and adverse events were similar to the incidence and severity for each vaccine when administered separately," it said.

Children with COVID-19 may be as contagious as adults

In a community-based study of COVID-19 patients who were not hospitalized, U.S. researchers found that children and adults with symptoms had similar viral loads, which suggests children can be just as contagious as grownups.

"There has been a lot of debate around school openings and about whether children could transmit the virus and we thought this study could help answer some of these questions," said Dr. Helen Chu of the University of Washington, who co-authored a report published on Friday in JAMA Pediatrics. Her team looked at 123 children and 432 adults with COVID-19 and found that nearly all of the adults had symptoms, compared to about two-thirds of the children.

"Overall, people with symptoms had higher virus levels than people without symptoms," Chu said. "However, when you looked within these groups – those with symptoms or those without – viral load was the same whether you were a child or an adult." She noted that swab tests were only done once, so researchers cannot be sure they took place when patients' viral loads were highest. But overall, she said, children in the community with SARS-CoV-2 infection can have virus levels similar to adults and can transmit it to others.