Delta variant of COVID-19: What makes it different? 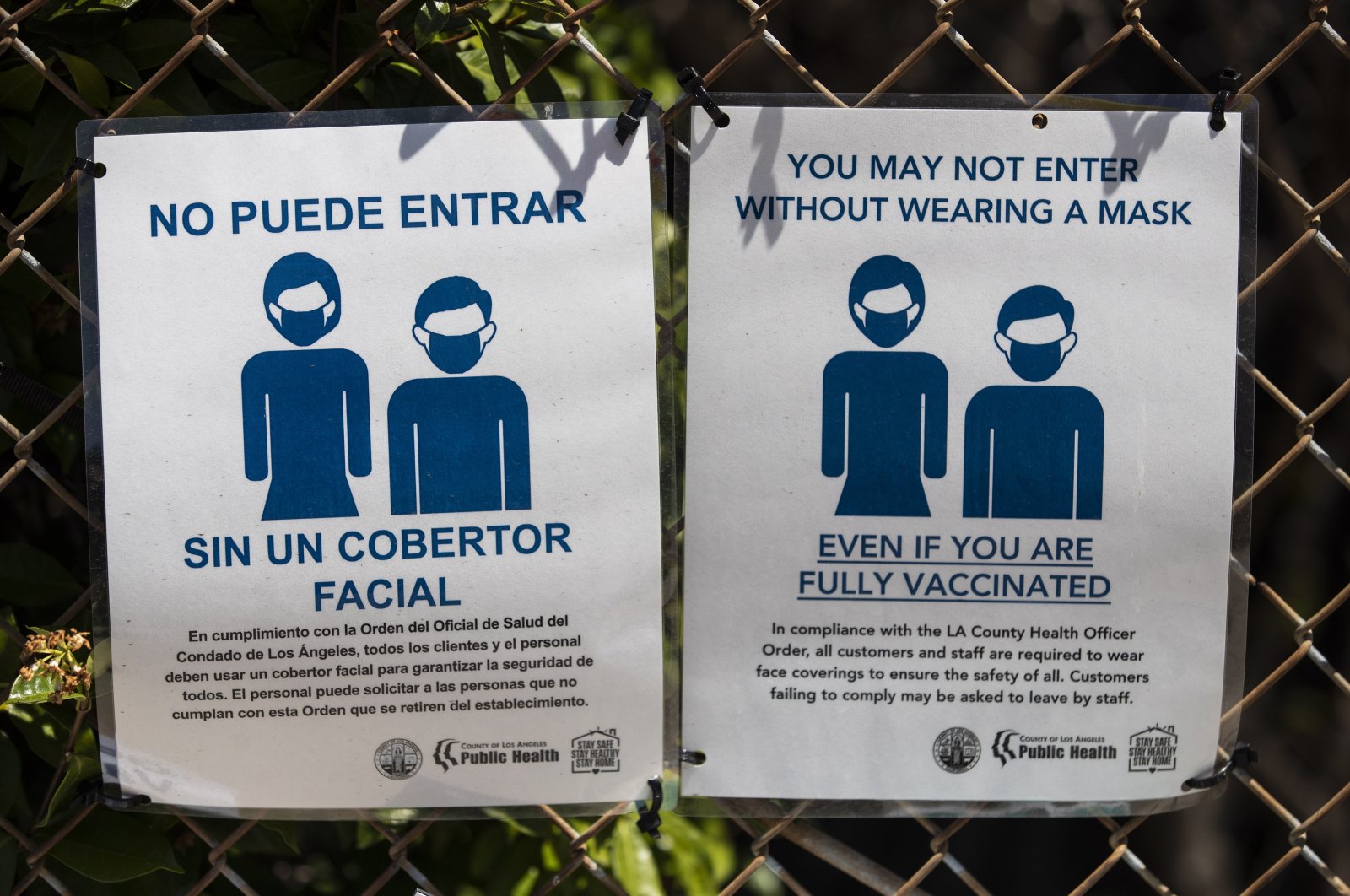 A sign by the entrance of a COVID-19 vaccine clinic at the Para Los Ninos building organized by Walmart and Para Los Ninos reads "You may not enter without wearing a mask even if you are fully vaccinated" in East Hollywood, California, U.S., 31 July 2021. (EPA Photo)
by German Press Agency - DPA Aug 02, 2021 12:44 pm
RECOMMENDED

As public health officials continue to urge people across the world to roll up their sleeves for COVID-19 vaccines, coronavirus infections have been on the rise in areas where vaccination rates remain low. That is due in no small part to the delta variant, which is set to become the globally dominant strain in weeks.

The delta variant has taken over in an alarmingly short time. Based on genomic testing, the Centers for Disease Control and Prevention estimates that the variant first identified in India accounted for 10% of cases during the two-week period ending on June 5. Four weeks later, delta's share had swelled to nearly 52%.

And it shows little sign of stopping: Coronavirus infections that had been dramatically reduced in some countries, thanks to COVID-19 vaccinations, are on the rise once again.

Both these facts serve as a testament to the ease with which delta spreads: It is estimated to be 40% to 60% more transmissible than the alpha variant, first identified in the United Kingdom, which itself was about 50% more transmissible than earlier versions of the virus. That means delta spreads more than twice as readily as the coronavirus that initiated the global pandemic.

But what does the delta variant actually do to those it infects? The Times spoke with two infectious disease experts – Dr. Robert Bollinger of Johns Hopkins University and Dr. Otto Yang of UCLA – about what we know so far.

Dr. Robert Bollinger: For lack of a better term, it's a little stickier. That's why you're seeing higher transmissions and outbreaks.

Even in places like Britain and Israel, where they have a lot of people vaccinated, those who aren't vaccinated are at even higher risk of getting infected when you have a more infectious variant. So that's been the main issue.

Dr. Otto Yang: It can look more like a runny nose, which is not as common previously. There are mild differences like that, but overall it's very, very similar.

The most important symptoms of course are still cough, shortness of breath and fever.

Yang: It's hard to tell, because you're dealing with a disease where the natural degree of severity is so widely variable – it ranges from completely asymptomatic to severe illness and death. The variability is so high at the baseline that you would need a really large number of people to be compared to tell.

So it's not clear if it is more deadly or not. We just don't know.

Bollinger: People getting infected now are a lot younger than they were with the earlier variants, because the older people are vaccinated at a much higher rate. So are some of the differences that are being reported related to the virus, or just the fact that it's younger people getting infected? I don't think we really know that yet.

Yang: Exactly. There are multiple moving parts, so it's hard to make a clear comparison.

A lot of people said COVID is becoming less and less deadly because mortality rates are going down. That's not necessarily the case. The demographics have changed. If younger, healthier people are now the ones mostly getting infected, it's not surprising the mortality is lower. It doesn't mean the disease has changed. This means the people getting infected have changed.

Bollinger: We haven't seen evidence of that just yet.

Yang: Absolutely. Mutations happen when the virus is replicating – copying itself in a person. The mutations happen as the virus makes genetic copies of itself for new viruses. The more people are infected, the more chance there is for mutations to come up.

In each person that gets infected, it's like a lottery ticket for the virus to make a new mutation that's beneficial to itself. So the more people, the more lottery tickets, basically.

Yang: The takeaway is that we can't rely entirely on the vaccines, because they are probably not going to be as effective in preventing the virus from spreading around. We can't just jump back to "normal life." We have to realize this virus is still a threat. And we have to take reasonable precautions to protect ourselves from getting infected even if we're vaccinated.

As a society, we need to be responsible about protecting everybody.