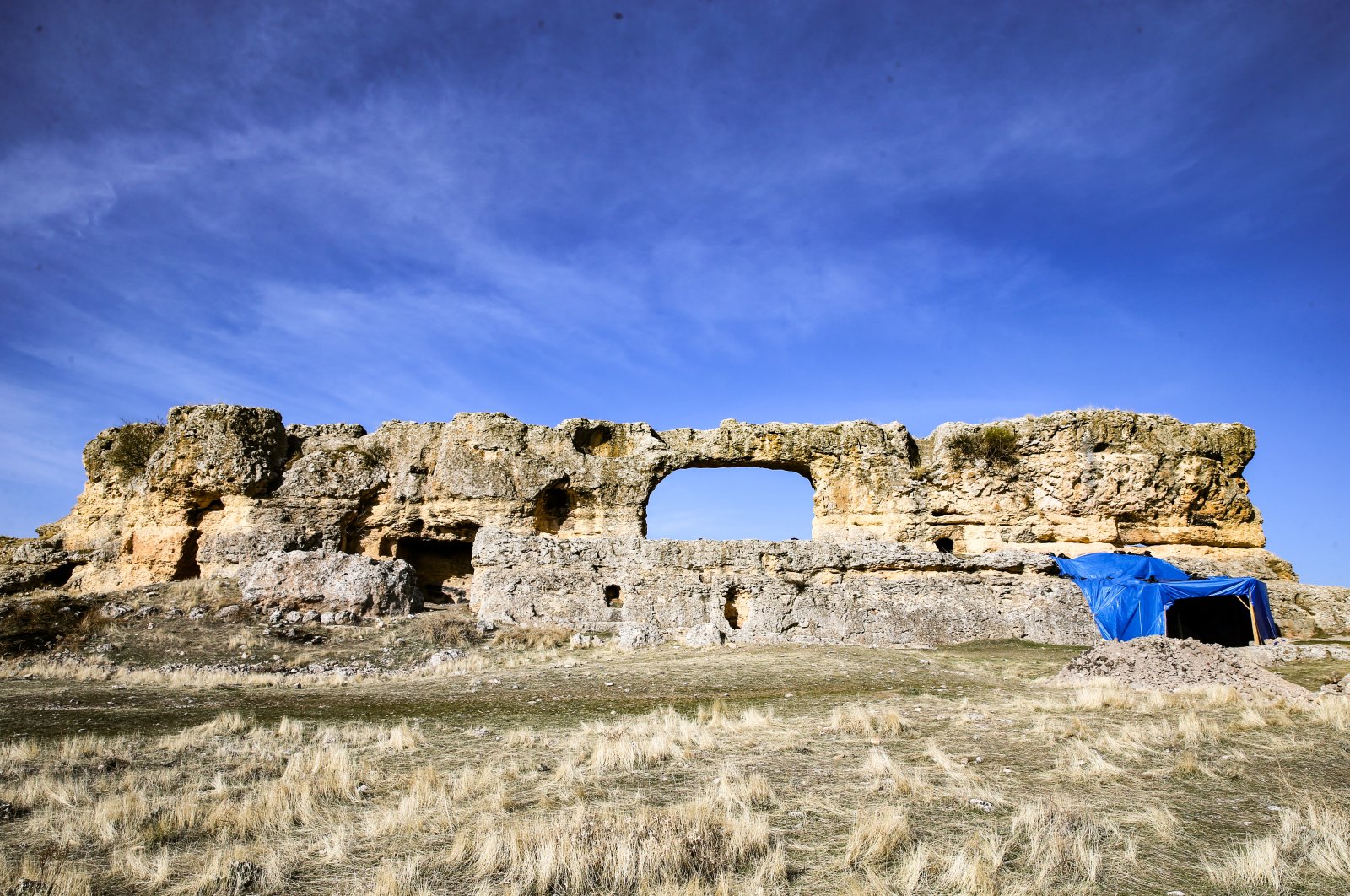 The Assyrian castle and a tent leading to the underground tunnels in the Eğil district of Diyarbakır province, southeastern Turkey, Jan. 18, 2021. (AA Photo)
by DAILY SABAH WITH AA Jan 21, 2021 1:50 pm
RECOMMENDED

In the southeastern Turkish province of Diyarbakır, the Municipality of Eğil and the district governor's office have been working extensively to preserve and promote the ancient Assyrian Eğil Castle and the King Tombs. As part of their efforts, an application was made to UNESCO to register these historical and cultural heritage sites on its World Heritage List.

The ancient Eğil Castle, which overlooks deep valleys on three sides and whose foundations are carved into a single rock base, is famous for its Kralkızı (King's Daughter) Dam Lake, its water cisterns and its incredible historical texture. The site is also believed to be the resting place of prophets Dhu al-Kifl and Elisha, whose names are mentioned in the Quran.

Eğil District Governor and Deputy Mayor Idris Arslan told Anadolu Agency (AA) that they have applied to the Culture and Tourism Ministry to begin excavations at the site and the relevant procedures are underway. Arslan said the first part of the project was to clear the ancient tunnels of the Assyrian castle.

Arslan pointed out that these historical sites should be known and renowned not just in Turkey but all over the world as well.

“We decided that we should promote this site through an organization known worldwide. So, we have started our work with professor Irfan Yıldız of Dicle University, and we have applied for the temporary list,” he said. “I hope our Assyrian castle and the King Tombs will soon be on the UNESCO World Heritage List. We should reach a conclusion in the upcoming months.”

Diyarbakır already has two sites, the Diyarbakır Fortress and Hevsel Gardens, on the list.

Arslan said archaeological excavations would start at the site once permissions were granted by the Culture and Tourism Ministry, and the historical and natural beauty of Eğil would be unearthed.

“Eğil will welcome people not just with its spirituality but also with its history. Being on UNESCO's list will mean that this ancient history will enter the world stage. Not only domestic tourists but also foreign tourists will learn of our region, which means a lot to us,” Arslan said.

Arslan pointed out that Eğil, based purely on its significant religious importance and attractions, has received high numbers of visitors. “We have had 400,000 guests daily. Going forward, we want to create a religious tourism complex and attraction with our Assyrian castle,” he explained, saying that it would be a long and arduous but prosperous journey.

Yıldız, meanwhile, said the castle was immensely important for shedding light on the region's history, and it was maybe the most significant castle in Diyarbakır. According to modern and historical sources, the castle originally belonged to Salmanasar, the third king of Assyria. The discoveries of the king's figures and etchings of his name on the stones also point toward that probability.

Yıldız also explained the strategic importance of the castle by saying that it was one of the border castles of Rome. He then touched upon the graves located in the historical Assyrian castle.

"One of the most important aspects of Eğil Castle is the kings' graves built in a similar shape to the Turkish kümbet, or mausoleum. The buried kings are believed to belong to Armenian kings from the Arsacid dynasty and to have been constructed during the (A.D.) first and second centuries. We know from sources that there were many valuable materials buried with the kings. It is also mentioned in historical sources that during the Sassanid Empire, the kings' graves were opened up and the treasures were taken," he explained.

Yıldız emphasized the importance of Eğil as a city of prophets and kings, relevant in the fields of cultural and religious tourism. He said the castle fully deserved recognition from UNESCO. “Hopefully, soon it will be included in the temporary list,” he said.