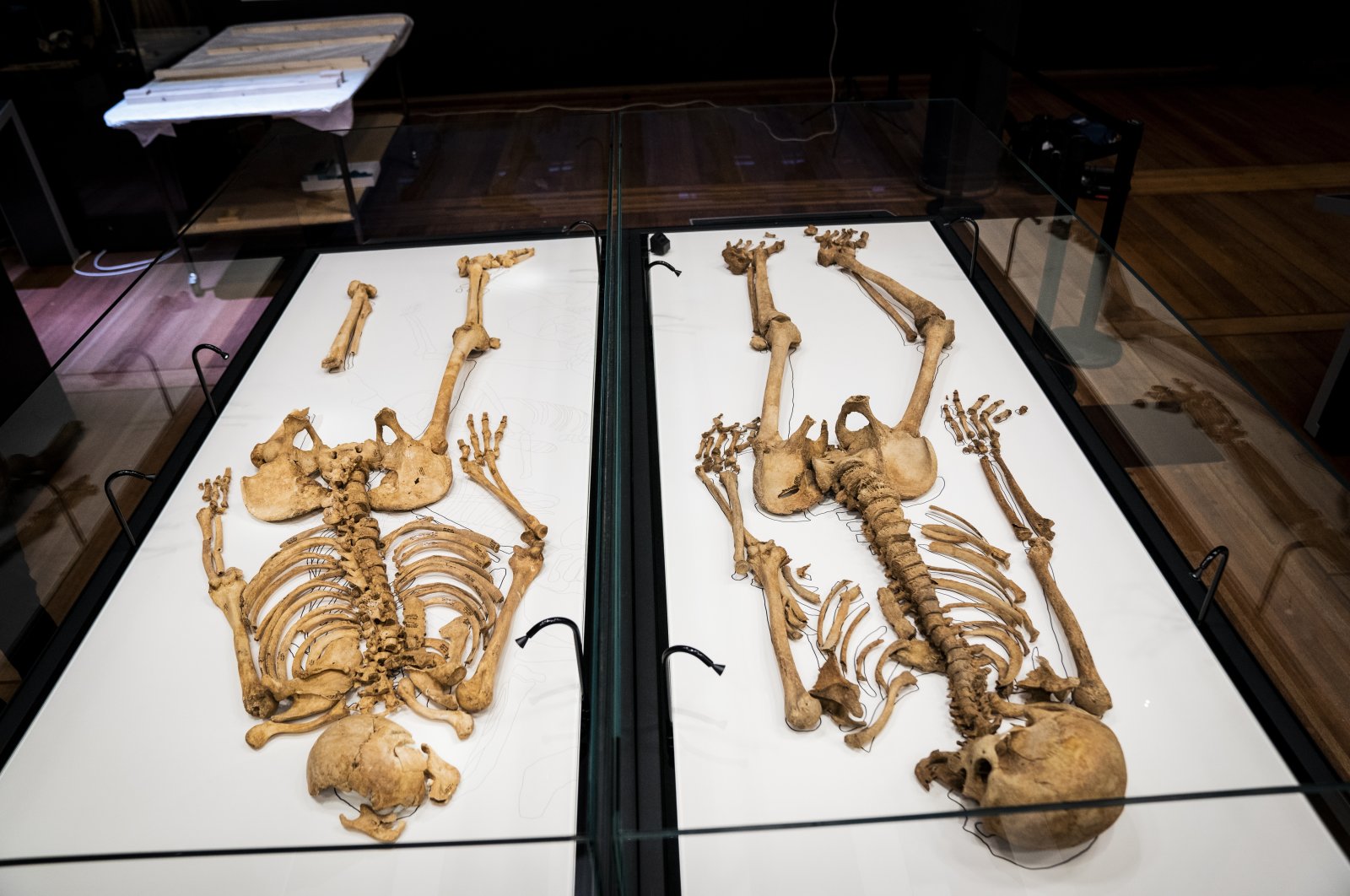 Two skeletons lie in a showcase at the National Museum of Denmark in Copenhagen, June 9, 2021. (Ida Marie Odgaard/Ritzau Scanpix via AP)
by French Press Agency - AFP Jun 10, 2021 11:50 am
RECOMMENDED

Two Viking warriors from the same family, separated for around 1,000 years, were reunited on Wednesday at Denmark's National Museum.

One of the Vikings died in England in his 20s in the 11th century from injuries to the head. He was buried in a mass grave in Oxford.

The other died in Denmark in his 50s, his skeleton bearing traces of blows that suggest he took part in battles.

The DNA analysis has helped shed light on the Vikings' movements across Europe. DNA mapping of skeletons from the Viking era – from the eighth to the 12th century – enabled archaeologists to determine by chance that the two were related.

"This is a big discovery because now you can trace movements across space and time through a family," museum archeologist Jeanette Varberg told Agence France-Presse (AFP).

Two of her colleagues spent more than two hours on Wednesday piecing together the skeleton of the man in his 20s from the remains freshly arrived from Oxford.

The 150 bones have been lent to the Danish museum by the Oxfordshire Museum in Britain for three years.

The historical consensus is that Danish Vikings invaded Scotland and England starting in the late eighth century.

The younger of the two men "may have been cut down in a Viking raid, but there is also a theory that they (the skeletons in the mass grave) were victims of a royal decree by English King Ethelred the Second, who commanded in 1002 that all Danes in England should be killed," Varberg said.

It is very rare to find skeletons that are related, though it is easier to determine the relationships for royals, according to Varberg.

While the two were confirmed to be relatives, it is impossible to determine their exact link.

They may have been half-brothers, or a grandfather and grandson, or an uncle and nephew.

"It's very difficult to tell if they lived in the same age or they differ maybe by a generation because you have no material in the grave that can give a precise dating. So you have a margin of 50 years plus or minus," Varberg said.