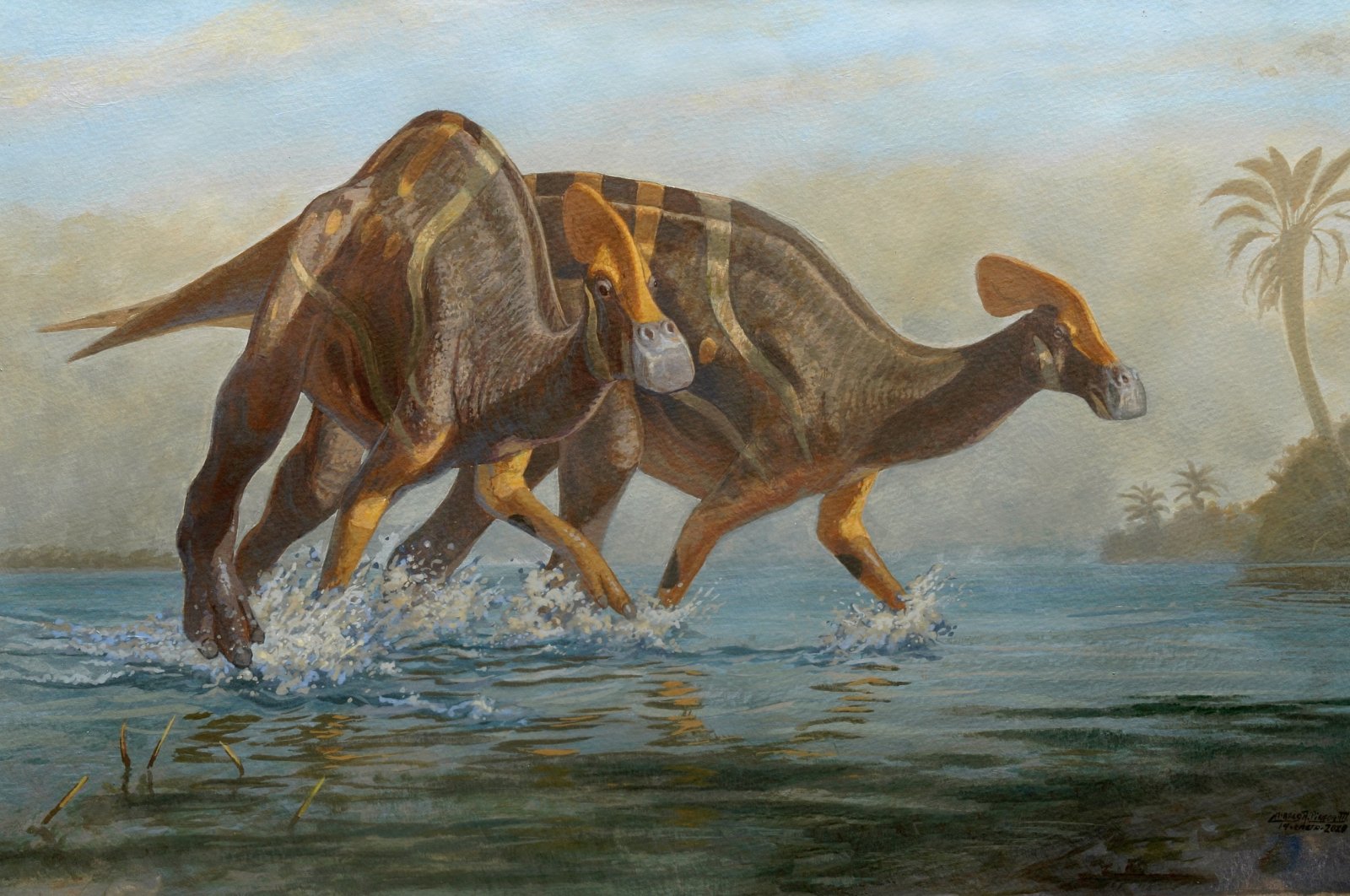 An illustration from Mexico's National Institute of Anthropology and History (INAH) depicts a new species of a dinosaur named Tlatolophus galorum, in General Cepeda, Coahuila, Mexico, obtained May 13, 2021. (INAH via Reuters)
by French Press Agency - AFP May 17, 2021 10:59 am
RECOMMENDED

Mexican paleontologists identified a new, talkative species of dinosaur after having discovered its 72 million-year-old fossilized remains almost a decade ago, Mexico's National Institute of Anthropology and History (INAH) announced recently.

The specimen, which has been named Tlatolophus galorum, is thought to have died around 72 million years ago in what is now Mexico's northern state of Coahuila.

After initially discovering the tail, paleontologists said they later found most of its skull, a 1.32-meter (4.3-foot) bony hollow crest through which it communicated, as well as bones such as its femur and shoulder.

"We are calculating the size, which could be between eight meters and 12 meters long because just the tail is around six meters," said paleobiologist Angel Alejandro Ramirez.

"We believe that these dinosaurs were very communicative. They even produced and perceived low-frequency sounds like those made by elephants, which travel several kilometers and are imperceptible to humans," added Ramirez.

These "peaceful, but talkative" dinosaurs could also have had the ability to emit loud sounds to scare off predators, INAH said when it announced the discovery.

Mexican researchers think Tlatolophus galorum's crest may have been red.

"We believe that these dinosaurs, like modern birds, saw in color and so these structures like the crest were possibly brightly colored. They could have been completely red, or multi-colored, with spots," Ramirez said.

The discovery is still under investigation, but research about the ancient reptile has already been published in the scientific journal Cretaceous Research, according to the INAH.

"It is an exceptional case in Mexican paleontology," it said. "Highly favorable events had to occur millions of years ago, when Coahuila was a tropical region, for it to be conserved in the conditions it was found in."

The name Tlatolophus is derived from tlahtolli – which means word in the indigenous Nahuatl language – and lophus, meaning crest in Greek, the researchers said.