Off to the side: Finding the unnamed Ankara sahaf 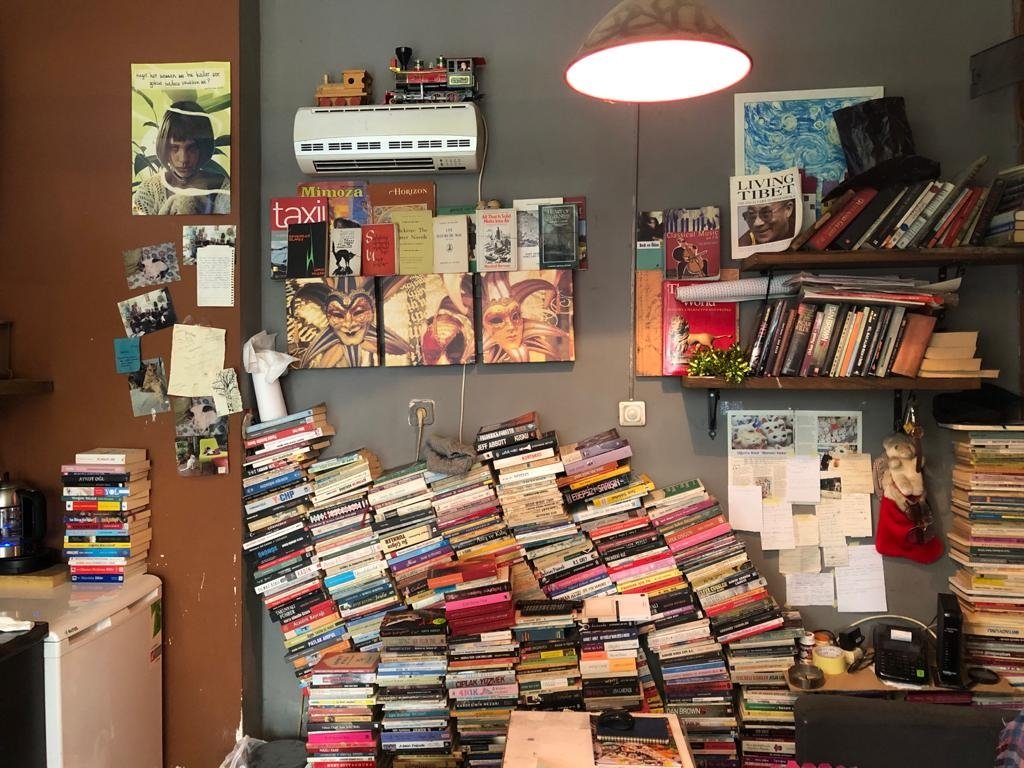 Photos of the bookstore's cats, artsy knickknacks and collector items are scattered across this sahaf in Ankara, Turkey. (Photo by Matt Hanson)
by Matt Hanson Mar 23, 2021 12:55 pm

In the core of the capital’s sprawling metropolitan districts, there are sahafs or used bookstores that dot the cityscape, offering brief respites for the world-weary to retire, temporarily in stories suspended in time

Dry air is said to induce critical thinking, its nature being that of clarity. The dryness of the Anatolian heartland, where the capital city of Ankara rises out of the rolling hills, is as much a university town as the center of Turkey’s national government. Unlike Istanbul, Ankara enjoys a metropolitanism that could be said to disperse out from a more or less decentralized sense of cultural self. Although largely car-dependent, many of its inner streets are richly walkable, sloping steeply to overlook the vast, urban skyline built around mystifying Greco-Roman ruins.

In a quiet, residential neighborhood between localities called Güvenevler and Ayrancı in Çankaya district, close to a Russian community in the environs of their embassy, there is a peculiar, untitled secondhand bookshop. Along the frame of the building, the word “sahaf” denotes its realm as that of a literary antiquary. It shares a broad, pedestrian-friendly street with other businesses of the independent stripe, modish and pro-youth, including a boutique clothing store called Kumbara and a bakery cafe, Un, meaning flour.

The sahaf, along the sleepy, tree-lined Alaçam Street is run by a quirky fellow with not a few feline friends. He is busy, opening the door to his shop wherein stacks of books of old are occasionally categorized according to a variety of categories that blend into each other, as multilingual and multicultural as the city beyond its pages. As is tradition to the sahafs across Turkey, the interior moves with a spectacular array of hanging objects, figments of tack that by their age and obscurity, have become endearing.

Without a word, the bookseller arranges a late breakfast for the half dozen or so cats that call the house of his old books home. When not feasting, they are hiding behind corners, waiting to hold out a clawless paw of curiosity to strangers, guests, readers and collectors out for a bookish romp in retrospective discovery. Mostly in Turkish, the sahaf carries a delightful representation of English-language books, with smatterings of Russian, French and Greek. It is a microcosm of Ankara’s intellectual sphere.

And as Ankara is utterly unique from Istanbul, although in a world of its own relativity, the steadfastness of its perspective, having harbored the republican spirit of social modernism, there is an encompassing sensibility to its regional acuity, that like a small city within a big city, invites other enthusiastically while retaining its distinctiveness. If Ankara were a book it would be an encyclopedia of stories, with an editorial commentary on the historical diversity of their telling denser than the stories themselves, or a neoclassical political meditation.

If these books could talk

It is observed among locals, that people who live in Ankara become introspective, and generally tend to read more. Landlocked, with a relatively bounded cultural sector, a book is an open window that swings wide open from the concrete interiors of the city. And its vistas are infinite, transformative, aligned with the interpretive powers of the mind, that, like experience, or time, constantly changes. A book is not, however, a fixed point, but might be compared to a moon that itself orbits around a planet, which revolves around a sun, with all celestial bodies.

It is for these reasons that the sahaf stock in Ankara is particularly expansive. Along the tranquil, domestic hum of Alaçam Street, such venturous authors as Amin Maalouf quench the thirst of homebodies with a compulsive desire to span the globe in all of its wealth of narratives spun by the yarns of history. On a single row, both Balthasar’s Odyssey and The First Century After Beatrice by Maalouf entice wandering minds out for a walk through 17th century Europe to Ottoman lands, or to a dystopian, male-dominated future, respectively.

The untitled Ankara sahaf, as it might be called by passersby, has a special relationship with its garden. Books, like the plants that hang from its ceiling and grow from its entryway soil, require time to appreciate. The front wall facade is glass, allowing natural light to pour in, also enlightening for the cats that sit, spryly, atop its tall stacks. And there is a sunny disposition about the place, even if the bookseller himself is meek, and sits in a corner, almost unseen, walled on three sides by large-format books displayed in every possible manner.

The seemingly random assemblage of titles makes for happenstance coincidences of parallel meaning, in which dissonances of logical continuity call an avid reader to question, and consider just how such disparate literary efforts might make sense, whether by a course of linear or cyclical reason. For example, at the untitled sahaf in Ankara, a peruser could stop and wonder just what Graham Greene, Evelyn Waugh and Iris Murdoch have in common with a modern translation of "Sir Gawain and the Green Knight."

As a matter of fact, Murdoch’s 25th novel was titled "The Green Knight," in which the satirical writer adapted the medieval poem into a tale of sibling rivalry. At the sahaf in Ankara, her sixth novel, "An Unofficial Rose" stares back at roving eyes, slim, worn, emblematic of the author’s career-long creative critique of romantic love. Among other possible analyses, Graham Greene’s name coincides with that of "The Green Knight," but more, Greene, Murdoch and Waugh represent the heights of canonical British literature on par with Sir Gawain.

At a foreign distance

For a reader abroad, the presence of books in an incomprehensible language appears like the night sky to naive eyes, at a loss for the known constellations and stars, yet glimpsing narrow frames of remembrance and hearsay. Such is the case with Turkish books in a sahaf to a unilingual Anglophone, especially one living in Turkey, and who, exposed to the works of its authors in translation and its publishing landscape, can only wonder, how these books are read and understood in their original tongue.

There are at least two novels by Mario Levi at the untitled Ankara sahaf, one of which is often seen on the warped, overburdened shelves of secondhand bookstores across Turkey, namely “Istanbul Was A Fairy Tale,” an 800-page multigenerational family epic of a novel that is apparently common in Turkish, but incredibly rare in English. There are different ways of thinking about how books might end up in a sahaf. Were they orphaned by neglectful owners, or, perhaps more optimistically, passed down through the utterly public institution of the sahaf?