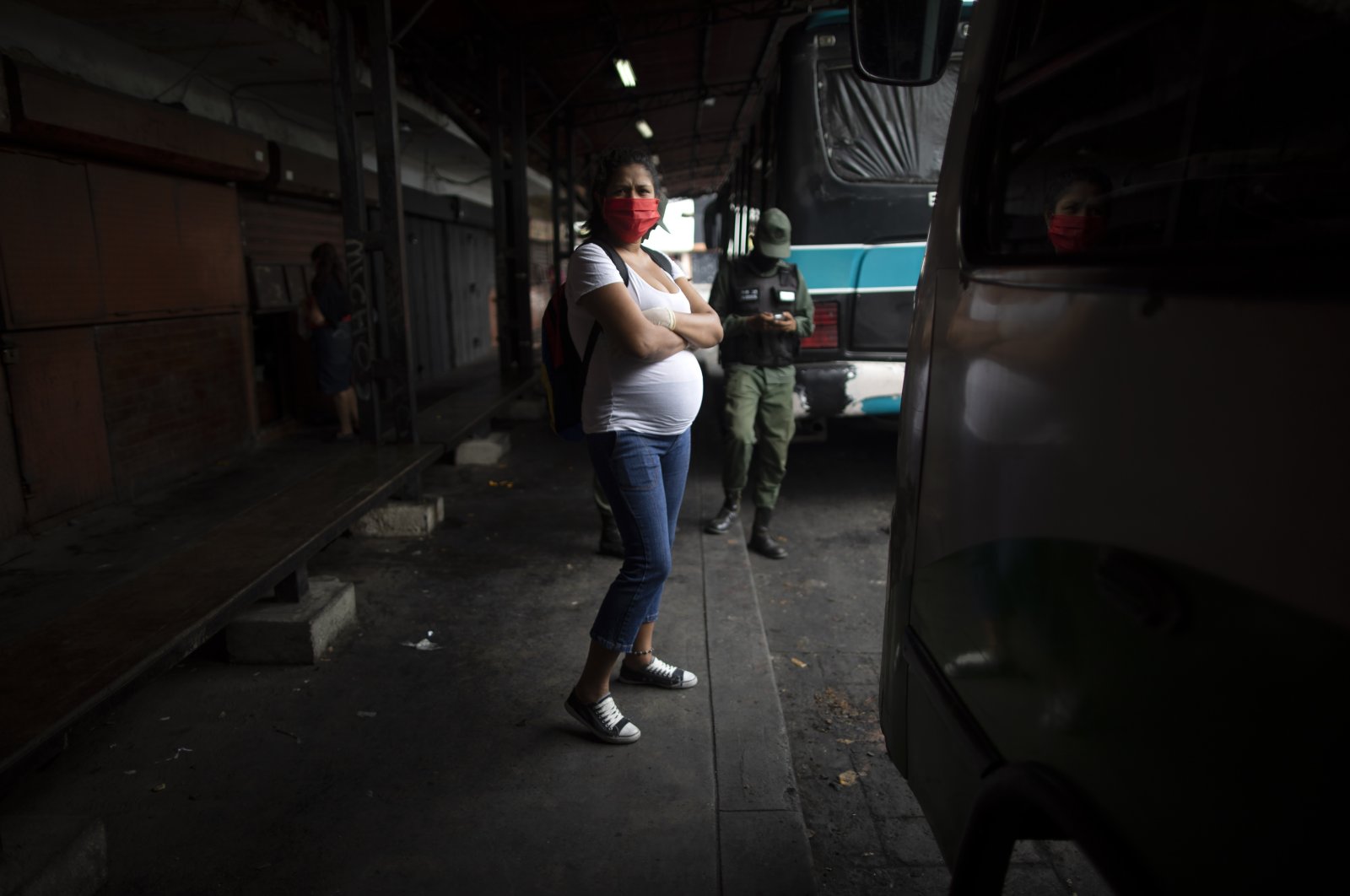 A pregnant woman wearing a protective face mask as a measure to curb the spread of the new coronavirus waits for a bus in Caracas, Venezuela, April 21, 2020. (AP Photo)
by REUTERS
Feb 28, 2021 3:45 pm

This week's roundup of some of the latest scientific studies on the coronavirus and efforts to find treatments and vaccines revisits infection rates in pregnant women, the mental and physical health consequences for long-COVID-19 and how technology can help indicate severe disease.

Pregnant women become infected with the coronavirus at higher rates than other adults, according to new data. Between March and June in Washington state, for every 1,000 pregnant women there were 14 cases of COVID-19, compared with seven cases among every 1,000 non-pregnant adults aged 20 to 39, researchers found.

After accounting for other risk factors, the COVID-19 rate in pregnant women there was 70% higher than in non-pregnant adults, according to a report in the American Journal of Obstetrics & Gynecology. Pregnant women in non-white racial/ethnic groups were particularly vulnerable. When compared with women in Washington state overall who delivered live births in 2018, the proportion of COVID-19 cases in pregnancy among most racial and ethnic minority groups during the pandemic study period was two to four times higher.

Italian doctors who interviewed COVID-19 survivors up to four months after their diagnosis found nearly one in three had post-traumatic stress disorder (PTSD). Their study included 381 adult survivors, roughly 80% of whom had been hospitalized.

Aside from PTSD, seen in 30% of study participants, other psychiatric issues included depressive episodes (diagnosed in 17%) and generalized anxiety disorders (7%), according to a report published in JAMA Psychiatry. Patients with PTSD were more likely to be female, to have been delirious or agitated while hospitalized and to be suffering from persistent COVID-19 symptoms.

The researchers point out that they only studied patients from a single hospital and did not compare them with patients with other serious illnesses, so they cannot say whether PTSD is more common after COVID-19. They note, however, that the prevalence of PTSD in their patients "is in line with findings ... reported after other types of collective traumatic events."

A device in Samsung S9 and S10 smartphones that measures oxygen levels in the blood meets U.S. Food and Drug Administration (FDA) standards and could be used to monitor COVID-19 patients, researchers said. Oxygen saturation levels are usually monitored with devices called pulse oximeters that clip onto a finger. Falling levels can indicate serious disease and need for intervention.

Pulse oximeters used in hospitals are expensive, and inexpensive versions sold in drugstores are of variable accuracy, the researchers said in a report posted on medRxiv ahead of peer review. The phones they studied have built-in pulse oximetry sensors, and the proprietary Samsung algorithms that interpret the signals "are very good," said co-author Sara Browne of the University of California, San Diego.

"We are not aware of any other smartphone that has clinical-grade pulse oximetry in it. Samsung did an awesome job on this," she said. Samsung dropped the sensors from their phones for 2020 and 2021, Browne said.

"As health care practitioners, we would love to see them put back in," she added. Her team estimates that over 100 million S9 and S10 phones are still in circulation and said they could be particularly useful in countries where access to accurate pulse oximetry is limited.

Variant found in U.K. may cause longer infections

The reason the coronavirus variant first identified in the U.K. is more transmissible than earlier versions of the virus may be that it spends more time inside infected people, giving them more time to spread the virus, according to a small study.

Researchers measured viral loads daily in 65 patients with COVID-19, including seven who were infected with the U.K. variant. The amount of virus carried by patients was similar in the two groups.

But among individuals infected with the variant designated B.1.1.7, the average duration of infection was 13.3 days, compared with 8.2 days in those infected by an older version of the coronavirus. The time until patients' viral loads peaked was also longer with the U.K. variant: 5.3 days versus two days with earlier variants.

"The findings are preliminary, as they are based on seven B.1.1.7 cases," the researchers cautioned in a report posted without peer review on a Harvard University website. "However, if borne out by additional data, a longer isolation period than the currently recommended 10 days after symptom onset may be needed to effectively interrupt secondary infections by this variant," they said.

New variant on rise in NYC

A new coronavirus variant that shares some similarities with worrisome variants discovered abroad is on the rise in New York City, studies show.

At Columbia University, researchers were analyzing virus samples from patients at their affiliated medical center to monitor for virus variants first identified in the U.K., South Africa and Brazil. When they looked for a particularly concerning mutation called E484K – against which current antibody therapies and vaccines are less effective – they found it in some samples. In many cases, it was not in one of the variants from abroad but a variant not seen elsewhere.

By mid-February, the new variant represented about 12% of their cases, the Columbia researchers reported. The variant was also described in a separate study by California Institute of Technology scientists, who analyzed virus samples collected in New York state since November. They found the new variant accounted for just 5% of samples in late January but almost 28% by late February.

Both reports were posted on medRxiv ahead of peer review. Last week, New York City Health Commissioner Dave Chokshi said the variant's real-world effect is unknown, and there is so far no indication that it reduces vaccine effectiveness.