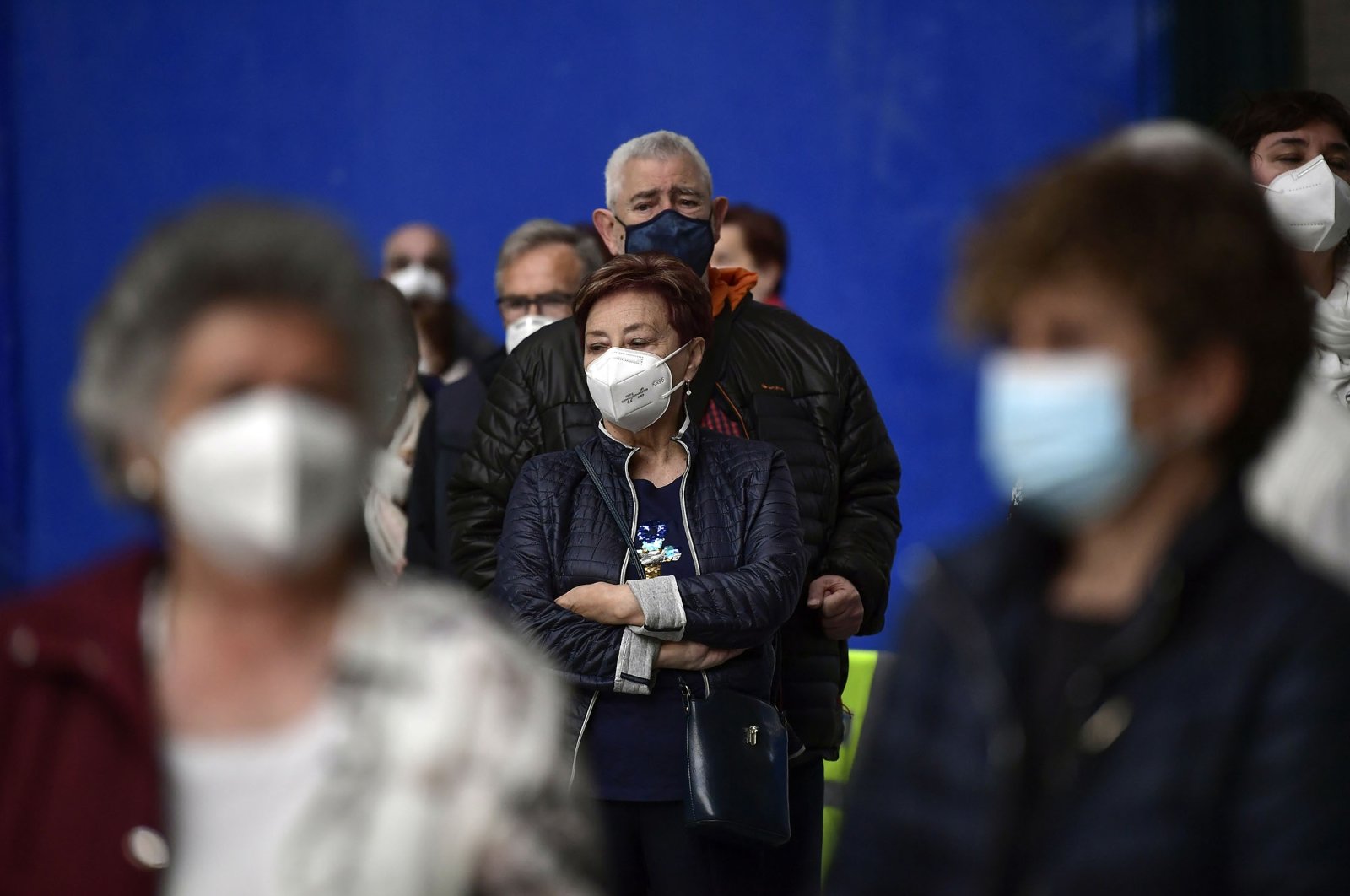 People wearing face masks wait to receive a shot of the Pfizer vaccine during a COVID-19 vaccination campaign, in Pamplona, northern Spain, May 7, 2021. (AP Photo)
by REUTERS May 09, 2021 11:25 am
Edited By Yasemin Nicola Sakay
RECOMMENDED

This week's roundup of some of the latest scientific studies on the novel coronavirus and efforts to find treatments and vaccines for COVID-19, the illness caused by the virus.

The COVID-19 mRNA vaccine from Pfizer Inc and BioNTech SE, BNT162b2, does not damage sperm, according to a study by Israeli researchers. They collected sperm samples from 43 male volunteers before and roughly a month after the men were vaccinated. None of their sperm parameters – volume, concentration, or motility – had changed significantly after vaccination, the researchers reported on medRxiv ahead of peer review.

"These preliminary results are reassuring to the young male population undergoing vaccination worldwide," the researchers said. "Couples desiring to conceive should vaccinate, as vaccination does not affect sperm," whereas previous studies have shown that coronavirus infection does affect sperm adversely.

No link seen between COVID-19 and aspirin or ibuprofen

A large new study found no indication that the use of non-steroidal anti-inflammatory drugs (NSAIDs) like aspirin or ibuprofen increases people's vulnerability to infection by the new coronavirus. Because early reports had suggested such a link, researchers used the COVID Symptom Study smartphone app to query more than 2.7 million individuals in the United States, the United Kingdom and Sweden about their use of aspirin and other NSAIDs, as well as about virus symptoms, COVID-19 testing, and health care-seeking behavior.

Close to 9,000 participants reported a positive COVID-19 test during the study, according to a report posted on medRxiv in advance of peer review. After accounting for individuals' lifestyle factors, other illnesses, and symptoms, regular use of NSAIDs was not associated with a higher risk of becoming infected with the coronavirus.

"There have been lingering concerns" that commonly used NSAIDs "could increase the risk of COVID infection or worsen the disease course among those who acquire the infection," said co-author Dr. Andrew Chan of the Massachusetts General Hospital in Boston. "Our study shows that there is no such an association and initial concerns were probably due to the fact that individuals with other risk factors for COVID or symptoms of COVID were more likely to take NSAIDs, rather than a cause and effect relationship," he said.

Some COVID-19 survivors infected early in the pandemic still have detectable antibodies against the virus a year later, according to a new study.

U.S. doctors collected blood samples from 250 patients, including 58 who had been hospitalized for COVID-19 and 192 who had not required hospitalization. Six-to-10 months after diagnosis, all of the former inpatients and 95% of the outpatients still had neutralizing antibodies, according to a report posted on medRxiv ahead of peer review.

In the small subset of those followed for a full year, eight out of the eight people who had been hospitalized still had antibodies, as did nine of the 11 former outpatients. Antibody levels at the time of follow-up were correlated with age and with COVID-19 severity.

Older age was linked with higher neutralizing antibody levels, whereas levels were "lower and more variable" in participants under age 65 who experienced less severe COVID-19 and did not require hospitalization, the researchers reported. They said vaccination of COVID-19 survivors "would be prudent" because vaccine-induced protection against the virus will likely be more long-lived than antibodies induced by mild COVID-19.

Severe complications associated with nasal swab tests for COVID-19 are very rare, a new study found. Researchers in Finland looked at six months of hospital emergency department data in a region where more than 640,000 such tests had been performed. They found that only eight patients needed emergency care for swab test-related problems.

Four of the eight cases were due to broken swabs and four to uncontrollable nosebleeds. All of the complications occurred immediately after swab tests, according to a report published in JAMA Otolaryngology-Head & Neck Surgery. The overall rate was 1.24 emergencies for every 100,000 performed tests.

While the study may have missed minor complications, it showed that COVID-19 nasopharyngeal swab testing "is safe and complications are extremely rare," said co-author Dr. Anni Koskinen of the University of Helsinki. All of the complications seemed to involve an incorrect sampling technique or misdirection of the swab, her team reported.

"Force should never be used, especially in patients with known prior operations of the nose or skull base," they advised.