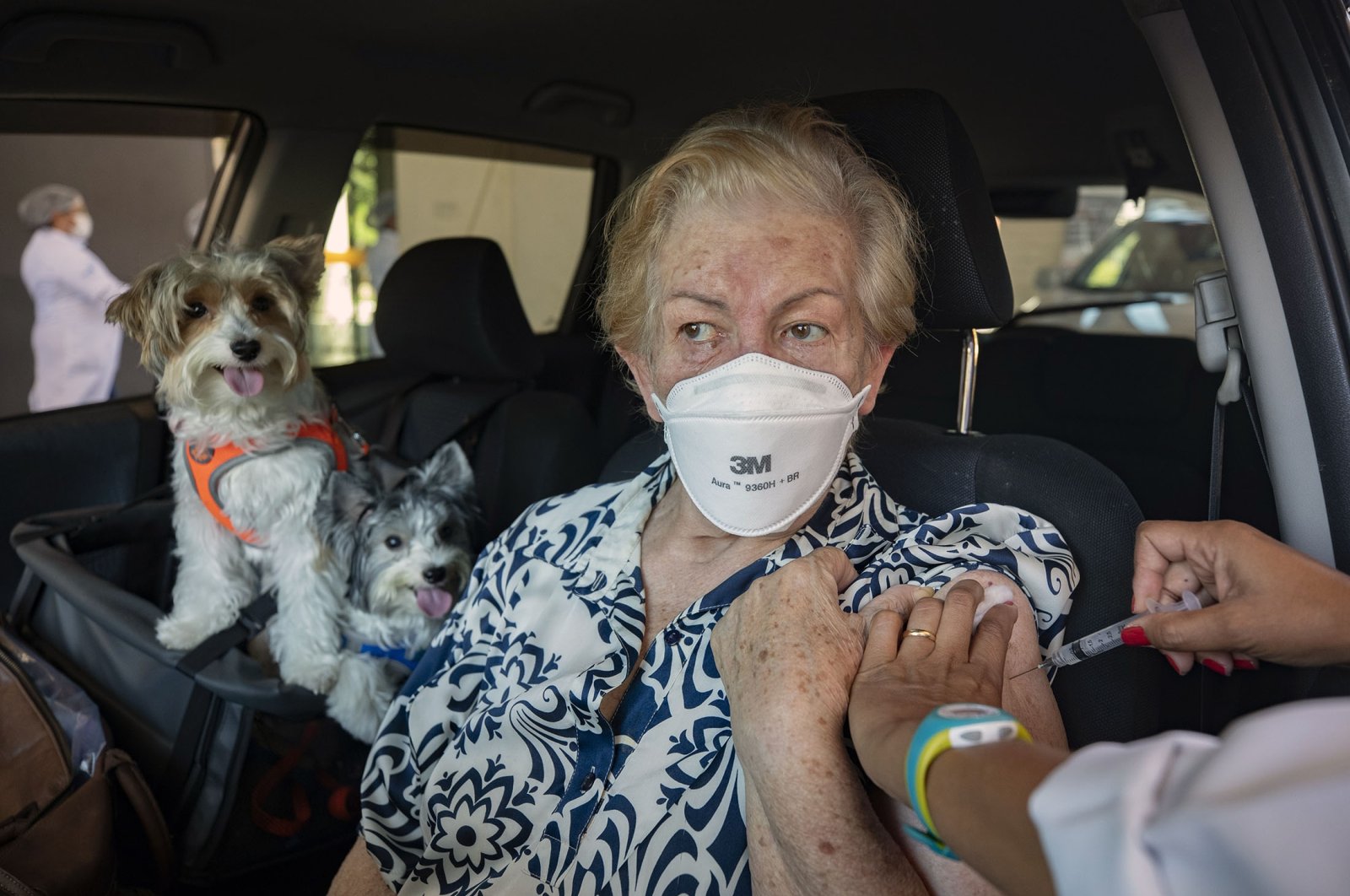 A woman gets a shot of the Sinovac COVID-19 vaccine while she sits in her car with her pets during a priority vaccination program for seniors at a drive-thru site set up in the Pacaembu soccer stadium parking lot in Sao Paulo, Brazil, March 3, 2021. (AP Photo)
by REUTERS Mar 28, 2021 11:30 am
RECOMMENDED

This week's roundup of some of the latest scientific studies on the coronavirus and efforts to find treatments and vaccines for COVID-19 explores how the new variants of the virus can infect pets and negatively affect their health, how a Chinese vaccine appears safe in children and why your weight gain over the past year can be blamed on lockdowns.

The coronavirus variant first identified in the U.K., known as B.1.1.7, has been linked to severe cases of heart disease in pets who appear to have caught the infections from their humans, veterinarians near London report. The findings come after Italian scientists found that humans could transmit the virus to their cats and dogs in August 2020.

The original strain of the virus did not appear to cause serious illness in pets. But between mid-December and February, mirroring the emergence and spread of B.1.1.7, the vets noticed a sudden surge of cats and dogs with myocarditis, a serious inflammation of the heart. In a paper posted on bioRxiv ahead of peer review, they describe 11 animals who suddenly became critically ill.

Two cats and one dog immediately tested positive for B.1.1.7 and another two cats and one dog later tested positive for antibodies. Many owners of these affected pets had a recent history of confirmed COVID-19. Myocarditis in pets remains rare, and in all of these cases, it appears that the infections were passed from people to pets, and not vice versa, said coauthor Dr. Luca Ferasin of The Ralph Veterinary Centre in Marlow, Buckinghamshire.

"Our cats and dogs made a remarkable clinical improvement after a few days in intensive care," he said. People concerned about their pets' health should contact their veterinarian, he added.

Some of the new coronavirus variants can cause COVID-19 in mice, researchers have found. This comes after a troop of gorillas at a San Diego Zoo were found to have been infected by the coronavirus, too.

The implications, such as whether mice could then transmit the virus to humans, will require further study, they said. (For the 10 animals that scientists think could possibly start the next pandemic, check out this link.)

The original virus strain identified in Wuhan, China, did not produce illness in mice because the spikes on its surface did not bind well to the ACE2 receptor protein on the animals' cells. Some of the new concerning variants – particularly the ones first identified in South Africa and Brazil – have mutations that overcome this challenge, giving them the ability to infect and sicken the mice, researchers reported on bioRxiv ahead of peer review.

"This is indeed great news for animal studies to better understand the infection and disease as mice are widely available ... to study many pathologies, and easier to work with than larger animals such as hamster or ferret," said coauthor Etienne Simon-Loriere of Institut Pasteur in Paris.

Whether mice can transmit the virus to each other or to humans remains to be determined. "We do not have the expertise to evaluate the health risk posed by this newly acquired capacity of SARS-CoV-2, but this is definitely something that will need to be done," Simon-Loriere said.

"No one wants the virus to move to a new reservoir from where it could come back to humans, as was feared with mink farms, and hopefully it will not happen."

Substantial weight gain is a clinically relevant effect of the coronavirus lockdowns, a new study suggests.

Researchers from the Health eHeart Study tracked 269 adults from 37 U.S. states and the District of Columbia who volunteered to report weight measurements from their Bluetooth-connected smart scales. Roughly half were men, 77% were white and the average age was 52. After shelter-in-place regulations took effect, participants "steadily" gained weight, regardless of their health status or where they lived, according to a report published in JAMA Network Open.

On average, they gained 270 grams (9.5 ounces) every 10 days or about 700 grams per month. The investigators acknowledged that people who own Bluetooth-connected scales may not be representative of the general population.

"It is important to recognize the unintended health consequences sheltering-in-place can have on a population level," they said. "The ... data demonstrate a need to identify concurrent strategies to mitigate weight gain, such as encouraging healthy diets and exploring ways to enhance physical activity, as local governments consider new constraints in response to SARS-CoV-2 and potential future pandemics." (If you'd like to try out three circuit workouts that are apartment-friendly and perfect for lockdown, head here.)

Sinovac Biotech's COVID-19 vaccine appears to be safe and able to trigger immune responses among children and adolescents ages 3 to 17, the company has said.

The data from early and mid-stage trials involving 500 participants compared medium and low dosages of vaccine to a placebo. Most adverse reactions were mild, Zeng Gang, a researcher with the company, told an academic conference in Beijing. The antibody levels triggered by Sinovac's CoronaVac were higher than those seen in adults in earlier clinical trials of the shot, Zeng said.

CoronaVac's effectiveness in adults has been lower compared to data from trials of other available vaccines. The company is also testing a third booster shot for adults in a China-based clinical trial, with participants given a third dose around eight months after receiving the second. The preliminary data in children has not yet been formally released.