It's alive? River delta aids search for signs of life on Mars 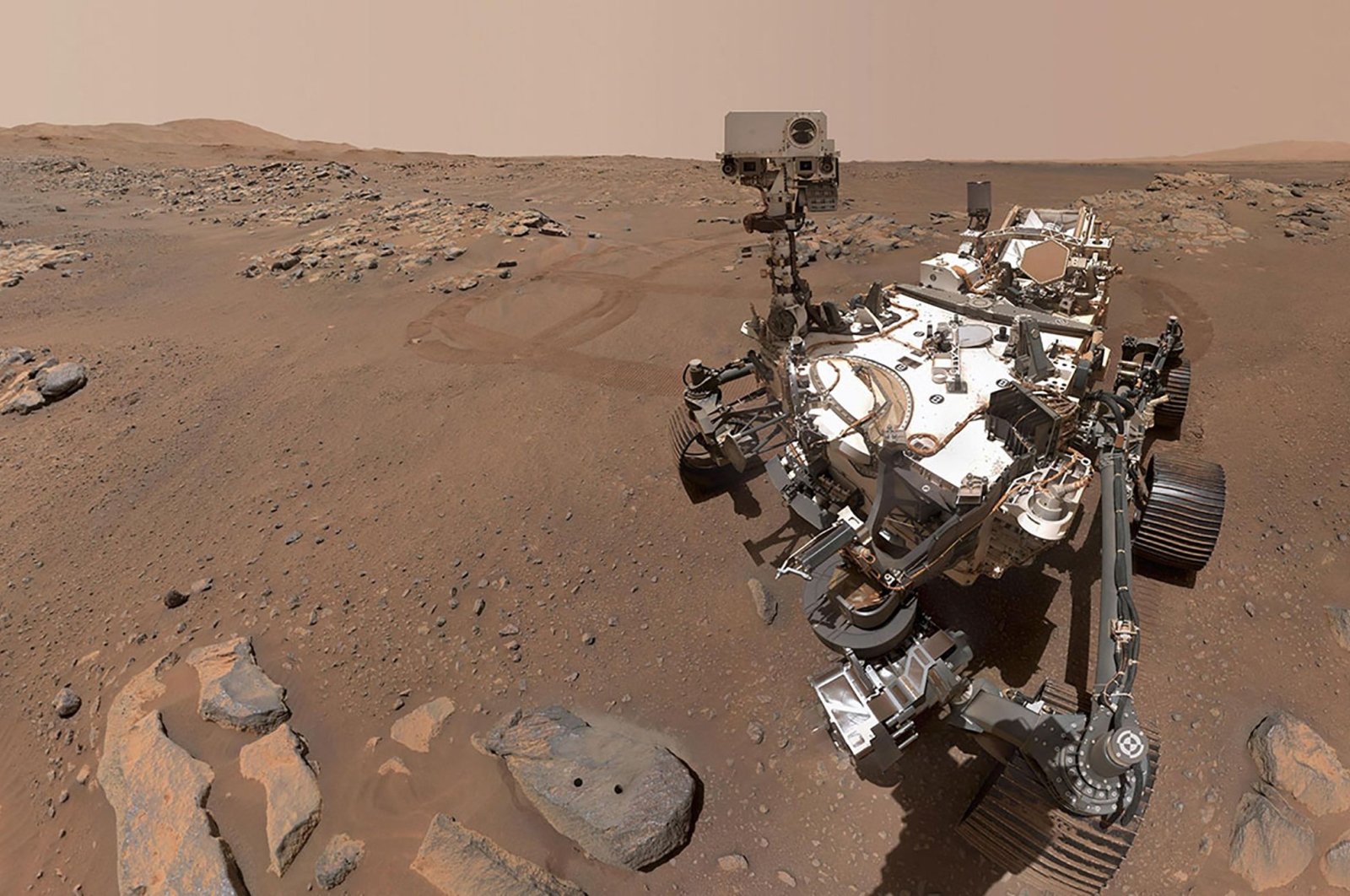 The Perseverance Mars rover, using its WATSON camera, takes this selfie over a rock nicknamed "Rochette" where two holes can be seen where the rover used its robotic arm to drill rock core samples, Sept. 10, 2021. (NASA via AFP)
by French Press Agency - AFP
Oct 08, 2021 1:40 pm

A new study showed Thursday that images from Mars reveal how water helped shape the Red Planet's landscape billions of years ago and provide clues that will guide the search for evidence of ancient life.

In February, NASA's Perseverance rover landed in Jezero crater, where scientists suspected a long-gone river once fed a lake, depositing sediment in a fan-shaped delta visible from space.

The study in Science analyzed high-resolution images captured by Perseverance of the cliffs that were once the banks of the delta.

Layers within the cliffs reveal how its formation took place.

NASA astrobiologist Amy Williams and her team in Florida found similarities between features of the cliffs seen from the crater floor and patterns in Earth's river deltas.

The shape of the bottom three layers showed a presence and steady flow of water early on, indicating Mars was "warm and humid enough to support a hydrologic cycle" about 3.7 billion years ago, the study says.

The top and most recent layers feature boulders measuring more than a meter in diameter scattered about, probably carried there by violent flooding.

But it is the fine-grained sediment of the base layer that will likely be the target of sampling for signs of long-extinct life – if it existed – on Mars.

The findings will help researchers figure out where to send the rover for soil and rocks that may contain precious "biosignatures" of putative Martian life forms.

"From orbital images, we knew it had to be water that formed the delta," Williams said in a press release.

"But having these images is like reading a book instead of just looking at the cover."

Finding out whether life may have existed on Mars is the main mission of Perseverance, a project that took decades and cost billions of dollars to develop.

Over the course of several years, the multi-tasking rover will collect 30 rock and soil samples in sealed tubes, to be eventually sent back to Earth sometime in the 2030s for lab analysis.

Last month mission scientists announced Perseverance had collected two rock samples in Jezero that showed signs they were in contact with groundwater for a long period.

Their hope is that the samples might at one point have hosted ancient microbial life, evidence of which could have been trapped by salt minerals.

Learning that Mars might once have harbored life would be one of the most "profound" discoveries ever made by humanity, Williams said.

She also expressed wonder at having a window onto an ancient river system on another planet.

"It's really eye-opening to see something no one on Earth has ever seen before," she said.

Perseverance landed on Feb. 18, and the study looks at long-distance images it captured during its first three months on Mars.

About the size of an SUV, it is equipped with 19 cameras, a 2-meter-long (7-foot-long) robotic arm, two microphones, and a suite of cutting-edge instruments.

One of them is called the SuperCam, a tool that laser-zaps rocks from a distance in order to study their vapor with a device that reveals their chemical composition.

It took seven months for Perseverance to travel from Earth to Mars with its sister craft Ingenuity, a tiny helicopter whose rotors have to spin five times faster than Earth versions to get lift in the far-less-dense atmosphere.

The plan is for the rover to cross the delta, then the ancient lake shore, and finally, explore the edges of the crater.