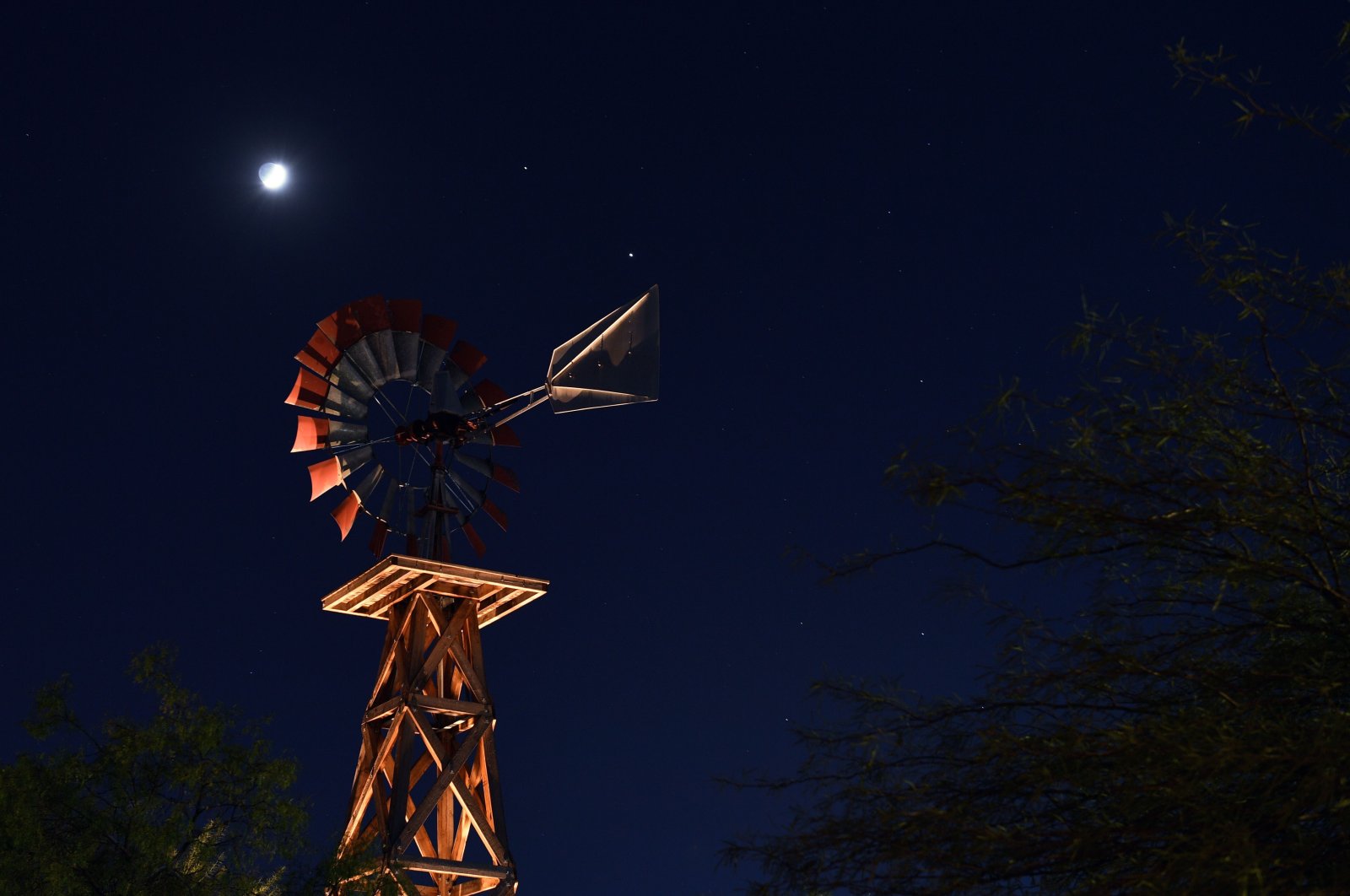 (L-R) The waxing crescent moon and the planets Saturn and Jupiter are shown above a windmill at Western Trails Park on November 19, 2020 in Las Vegas, Nevada. (AFP Photo)
by Anadolu Agency Dec 10, 2020 12:05 pm
Edited By Yasemin Nicola Sakay
RECOMMENDED

In a once in 20 years occurrence, Jupiter and Saturn will appear very close together in the night sky on Dec. 21, the day that marks the winter solstice.

The two gas giants will actually be hundreds of millions of miles apart but will appear exceptionally close, just a tenth of a degree apart or one-fifth of a full moon's diameter, according to Live Science. The incident is known as the great conjunction by astronomers.

"The last time Saturn and Jupiter looked this cozy was July 16, 1623, back when the famous Italian astronomer Galileo Galilei was alive," according to Space.com.

Michael Brown, an astronomer at Australia's Monash University, told The Washington Post that the last great conjunction happened on May 28, 2000.

"The two planets appear to rendezvous so infrequently because their orbits are mismatched. Jupiter takes nearly 12 Earth years to circle the sun and Saturn takes nearly 30. On top of that, these gaseous planets travel on differently tilted "tracks" around the sun, so they rarely appear this close to one another (at least from Earth's perspective) during great conjunctions," he said.

Before the very close 1623 great conjunction, which was likely impossible to see from Earth because the planets appeared so close to the sun, the last visible and seemingly intimate meeting between Jupiter and Saturn happened in March 1226, Brown told the Post.

According to NASA, the two will be seen with the naked eye and if you have a telescope or binoculars, the planets will appear in the same field of view.

"In fact, Saturn will appear as close to Jupiter as some of Jupiter's moons," NASA said in a statement.

They will remain in the western sky for about an hour before sunset, and the further north you are located on the globe, the less time you'll have to catch a glimpse.

The "greatest" great conjunction between Jupiter and Saturn won't be happening for another 60 years until March 2080. The next one after that will likely be after 2400.