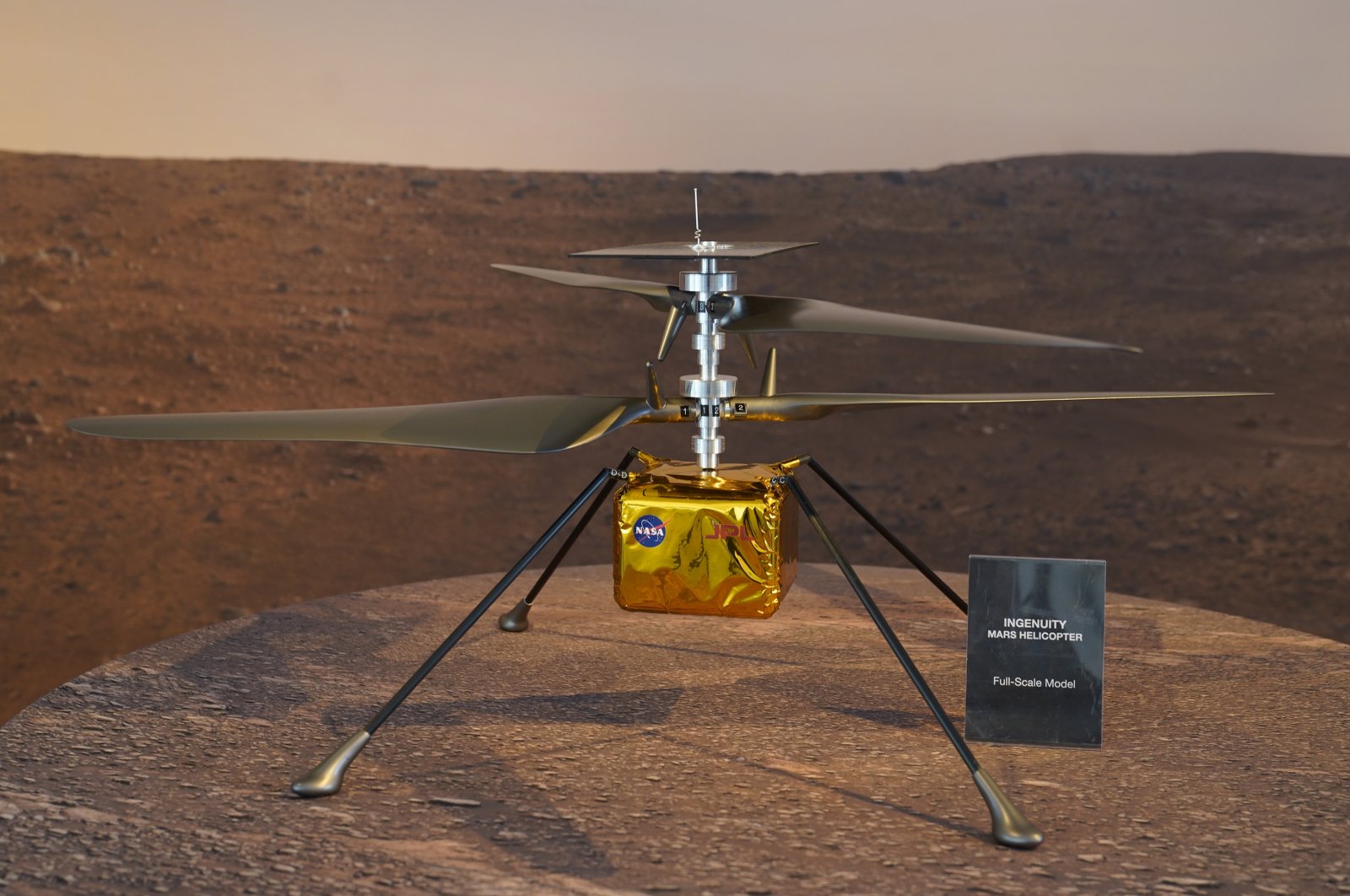 This Feb. 17, 2021, file photo shows a full-scale model of the Ingenuity helicopter displayed for the media at NASA's Jet Propulsion Laboratory in Pasadena, California, U.S. (AP Photo)
by Agencies Mar 25, 2021 11:10 am
RECOMMENDED

NASA has said its robotic Ingenuity helicopter, which landed on Mars aboard the Perseverance Rover last month, is set to make its first flight attempt on the distant planet on April 8 at the earliest. It will be the first attempt at a powered, controlled flight of an aircraft on another planet.

The 4-pound (1.8-kilogram) rotorcraft remains attached to the belly of the Perseverance rover, the science robot that touched down on Mars on Feb. 18.

On March 21, the rover deployed the guitar case-shaped graphite composite debris shield that protected Ingenuity during landing. The rover currently is in transit to the "airfield," where Ingenuity will attempt to fly.

Once deployed, Ingenuity will have 30 Martian days, or sols, which is equal to 31 Earth days, to conduct its test flight campaign, NASA said in a statement Tuesday.

"We want to learn about the potential Ingenuity has for the future of scientific research," said Lori Glaze, director of the Planetary Science Division at NASA Headquarters.

"Aptly named, Ingenuity is a technology demonstration that aims to be the first powered flight on another world and, if successful, could further expand our horizons and broaden the scope of what is possible with Mars exploration," she added.

Since Mars has one-third of the Earth's gravity and an atmosphere just 1% as dense as the Earth's at the surface, flying Ingenuity in a controlled manner on Mars is more difficult than flying on Earth, while energy and temperature change will be issues for the flight, according to NASA.

During Martian daytime, the planet's surface receives only about half the amount of solar energy that reaches Earth during its daytime, and nighttime temperatures can drop as low as minus 90 degrees Celsius (minus 130 degrees Fahrenheit), which can freeze and crack unprotected electrical components.

Bob Balaram, Mars helicopter chief engineer at NASA's Jet Propulsion Laboratory, said, "Surviving that first night on Mars alone, without the rover protecting it and keeping it powered, will be an even bigger one."

The Ingenuity helicopter – from the performance of its rotors in rarified air to its solar panels, electrical heaters and other components – has been tested and retested in the vacuum chambers and test labs of NASA's Jet Propulsion Laboratory in Southern California.