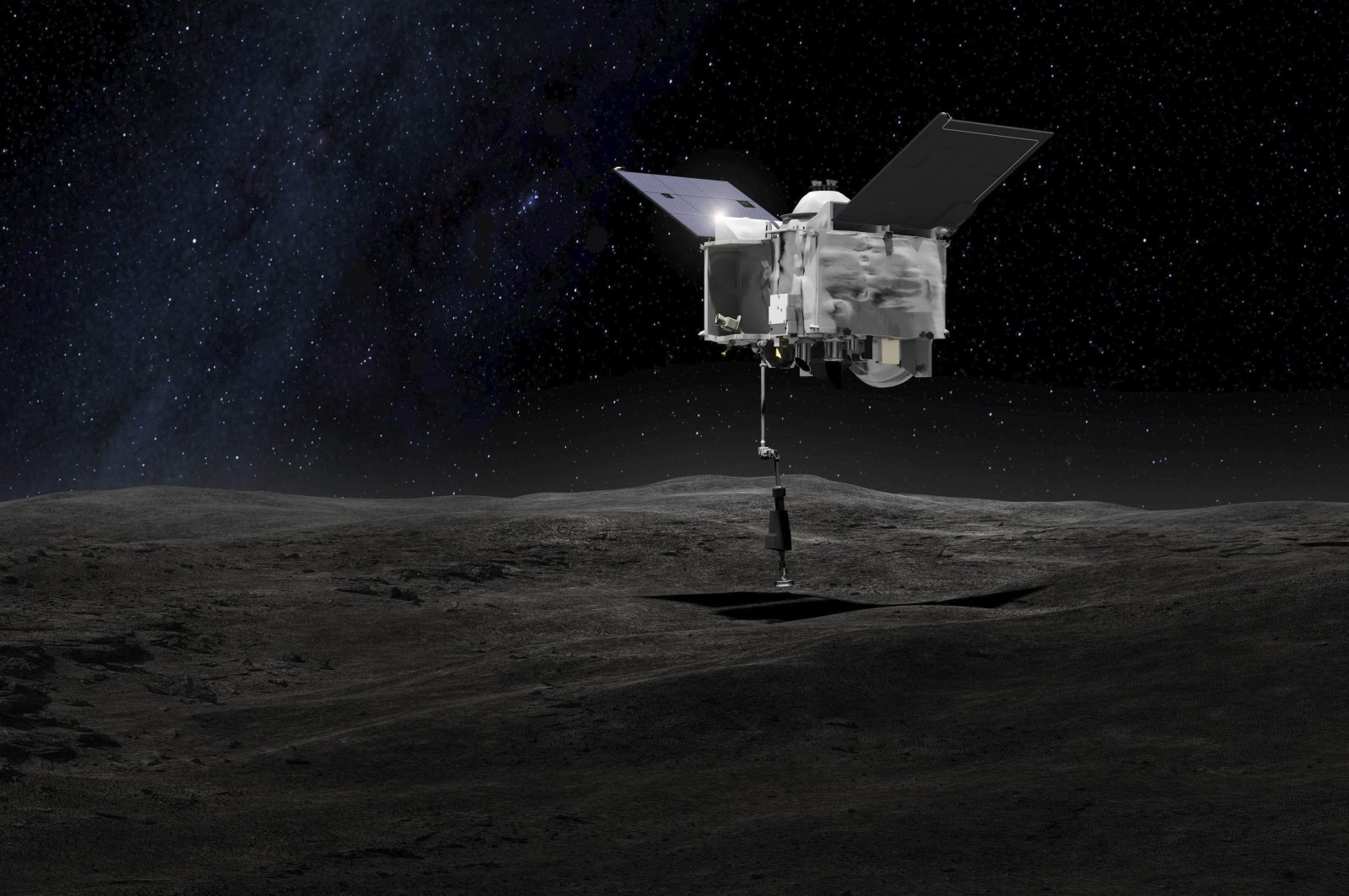 This artist's rendering shows the Origins Spectral Interpretation Resource Identification Security - Regolith Explorer (OSIRIS-REx) spacecraft contacting the asteroid Bennu with the Touch-And-Go Sample Arm Mechanism, made available by NASA on Sept. 6, 2016. (NASA via AP)
by Agencies May 11, 2021 10:55 am
RECOMMENDED

The NASA space probe OSIRIS-REx on Monday left the orbit of the skyscraper-sized asteroid Bennu with a large collection of samples to begin its long two-year journey back to Earth.

OSIRIS-REx traveled some 200 million miles (320 million kilometers) from Earth to reach Bennu in 2018 and spent two years flying near and around it, before collecting rubble from the surface last fall. It still has a vast distance to cover before it lands in the Utah desert on Sept. 24, 2023.

Staff celebrated at the OSIRIS-REx control room in Colorado as the space vehicle pushed away from the asteroid, whose acorn-shaped body formed in the early days of our solar system.

The spacecraft found traces of hydrogen and oxygen molecules – part of the recipe for water and thus the potential for life – embedded in the asteroid's rocky surface, said Dante Lauretta, the OSIRIS-REx mission's principal investigator, in 2018.

The University of Arizona’s Dante Lauretta, the principal scientist, estimates the spacecraft holds between half a pound and 1 pound (200 grams and 400 grams) of mostly bite-size chunks. Either way, it easily exceeds the target of at least 2 ounces (60 grams).

It will be the biggest cosmic haul for the United States since the Apollo moon rocks. While NASA has returned comet dust and solar wind samples, this is the first time it's gone after pieces of an asteroid. Japan has accomplished it twice but in tiny amounts.

“I’ve been working on getting a sample back from an asteroid since my daughter was in diapers and now she’s graduating from high school, so it's been a long journey,” said NASA project scientist Jason Dworkin.

Lauretta added, “We have gotten used to being at Bennu and seeing new and exciting images and data coming back to us here on Earth."

Scientists hope to uncover some of the solar system’s secrets from the samples vacuumed last October from Bennu’s dark, rough, carbon-rich surface. The asteroid is an estimated 1,600 feet (490 meters) wide and 4.5 billion years old.

Bennu – considered a broken chunk from a bigger asteroid – is believed to hold the preserved building blocks of the solar system. The returning pieces could shed light on how the planets formed and how life arose on Earth. They also could improve Earth’s odds against any incoming rocks.

The SUV-size spacecraft will circle the sun twice before delivering its small sample capsule to Utah's desert floor to end the more than $800 million mission.

The precious samples will be housed at a new lab under construction at NASA's Johnson Space Center in Houston, already home to hundreds of pounds of lunar material collected by the 12 Apollo moonwalkers from 1969 to 1972.

Scientists initially thought the spacecraft stored 2 pounds (1 kilogram) of asteroid rubble, but more recently revised their estimate downward. They won't know for certain how much is on board until the capsule is opened after touchdown.

“Every bit of sample is valuable,” Dworkin said. “We have to be patient.”

Set to launch in October, a spacecraft named Lucy will fly past swarms of asteroids out near Jupiter, while a spacecraft known as Dart will blast off in November in an attempt to redirect an asteroid as part of a planetary protection test. Then in 2022, the Psyche spacecraft will take off for an odd, metallic asteroid bearing the same name. None of these missions, however, involve sample return.