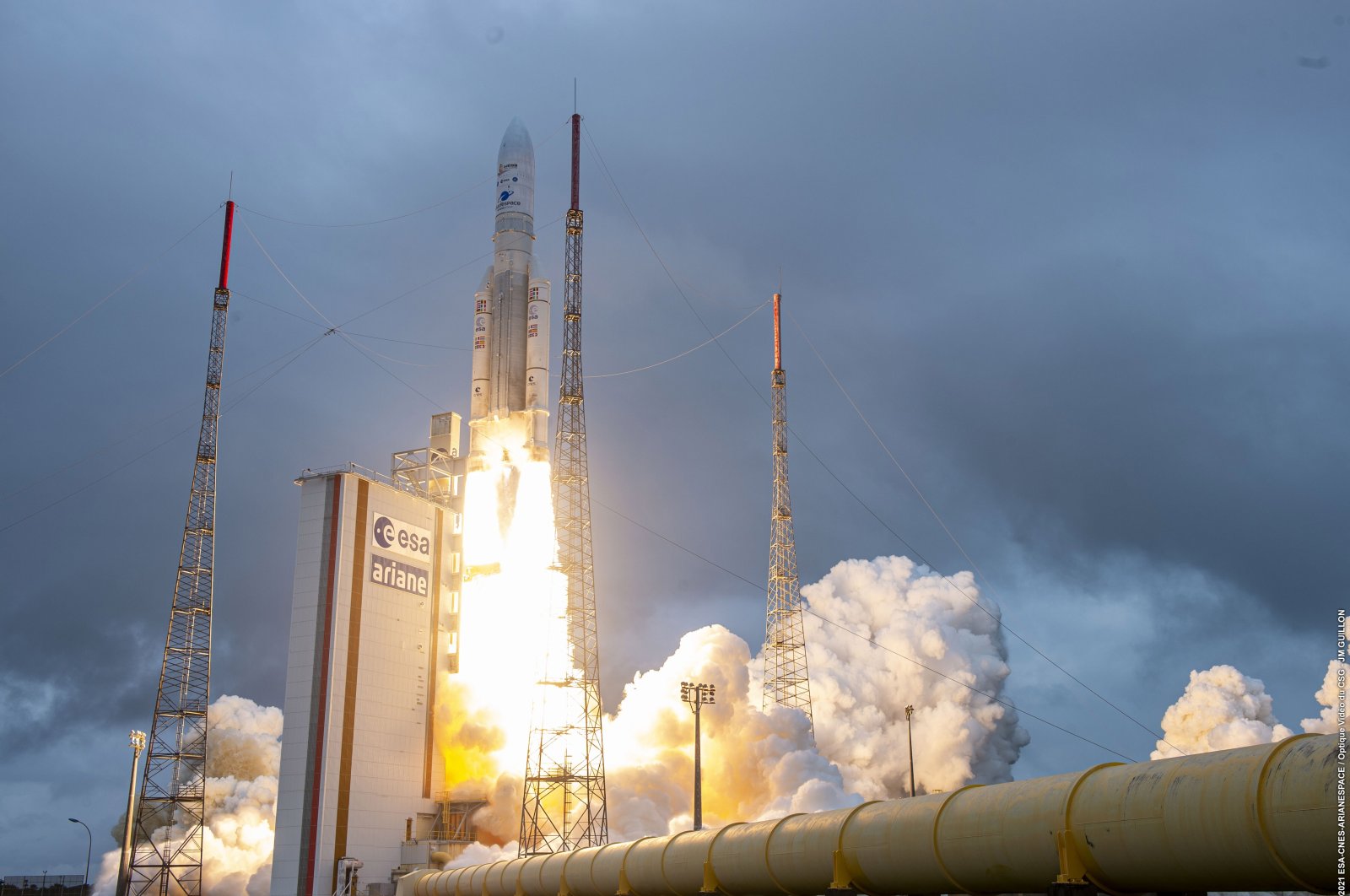 The James Webb Space Telescope is launched with an Ariane 5 rocket from the site in French Guiana on the northeast coast of South America, Dec. 25, 2021. (AA Photo)
by Anadolu Agency Dec 28, 2021 10:46 am
RECOMMENDED

The first and second stage engines of the Ariane 5 missile, the launcher of the world's most advanced space telescope James Webb, were developed at the ICARE-CNRS labs, established by professor Iskender Gökalp, a faculty member at Middle-Eastern Technical University's (ODTÜ) Mechanical Engineering Department.

Gökalp, who returned to Turkey from France in 2019 with the Scientific and Technological Research Council of Turkey's (TÜBITAK) Leading Researchers Program, told Anadolu Agency (AA) the tale of the rocket that launched from French Guiana on the northeast coast of South America.

Explaining that a launch system was needed to send the telescope into space, he said, "The only team working on the optimization of the two different stages of the Ariane 5 launcher's engines is the ICARE-CNRS laboratory that I set up in Orleans, France."

He then established the ICARE-CNRS laboratory by merging the two departments in 2007.

Gökalp said he has been working on the combustion technologies in these launchers for 30 years and continued as the director of ICARE-CNRS until 2017.

"World-renowned R&D laboratories are not something that come together in a few years. They have a 50 to 60-year history," he said.

Expressing that Ariane 5 has had a few problems since the 1990s, Gökalp explained that the first flight with this launcher was conducted in 1996, and the missile exploded in the air.

"I was actually there, and the explosion happened while I was talking about it on television," he said. "Issues related to the combustion processes that provide the thrust of the launcher are constantly studied, problems are discussed. Flight 517 of Ariane 5 ended in the Atlantic Ocean in 2002. After the scientific and technological bottlenecks were resolved, there were not many problems in subsequent launches."

Gökalp also said his area of ​​expertise was the fuel and combustion technologies in the launch systems of the telescope.

"Two days ago, the James Webb – the world's largest and most advanced space telescope – was launched into space with the rocket engines of ICARE-CNRS, which I helped develop had a great role in improving and optimizing their combustion processes. I have worked in this laboratory since 1983," he said and added, "Therefore, we are very happy that Ariane 5 was chosen for the launch."

Gökalp emphasized that the James Webb telescope, which is seen as the successor of the Hubble Space Telescope, was expected to settle into orbit about 1.5 million kilometers (932,000 miles) from Earth in about a month's time.

He also said they were eagerly anticipating whether the new telescope would confirm theories in cosmology.

"The new telescope is expected to start collecting the first data and images in 2022. The James Webb telescope will sit in such an orbit that it will detect infrared light signals originating from deep space with great precision and send them to the world. This telescope will enable us to reach the light information that has emerged from the formation of the universe, the Big Bang, and has been around since the events we call the bang.

"In other words, it will make new contributions to the fields of astronomy and cosmology, will provide information on how the universe and the first galaxies were formed. It is very important in this respect. Of course, it will take years to reach and analyze this information. Just like the how the fragments brought back from the moon are still being studied, this like them will perhaps take centuries."

Gökalp stated that with the new telescope, answers will be sought to questions such as how the universe was formed and whether there is one universe or several universes.

"The expectation of the scientific world is that this telescope can answer these questions. An investment of $10 billion is mentioned, maybe $20 billion, $30 billion if you add everything.

"This telescope has been developed within the particle physics field. The scientific world is waiting to see if the existing theories in the field of cosmology will be confirmed. Information from this new telescope is needed to verify it, so everyone is looking forward to it. The radiation we call infrared can only be observed from space. Also, in order to increase its sensitivity, the telescope needs to be cooled: Hubble can't do that because it is closer to Earth.

"The product of NASA's collaboration with the European and Canadian space agencies, the James Webb telescope, the largest and most powerful science observatory ever built, is seen as the successor to the Hubble Space Telescope. The development of space launch technologies is one of the most important aspects that makes humankind's new adventure possible."