To read into an image: Pieces of Ottoman literary past in Istanbul 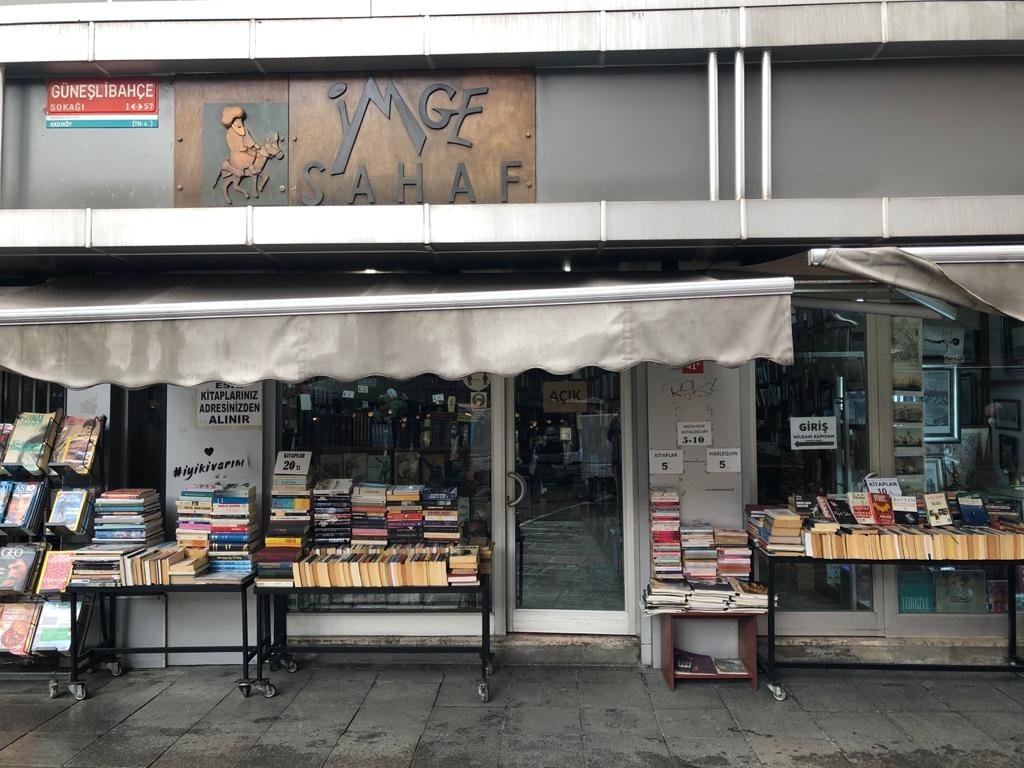 Imge Sahaf sits in the middle of Kadıköy’s traditional commercial center across from the district's famed Çiya Sofrası restaurant. (Photo by Matt Hanson)
by Matt Hanson Apr 06, 2021 11:20 am

In Istanbul’s Kadıköy district, steps from the pier where commuter ferries break waves over the southern confluence of the Bosporus heading toward the Marmara Sea, there is a precious store of literary history

A man spills tea at his desk surrounded by books from floor to ceiling near cases overflowing with stacks of yellowed magazines, hardcovers and paperbacks from two centuries past. He sits atop a foundational node of Western culture, its history of expression as textual, the core of its rule and accounting, the authors of its authority. He wipes his desk clean and receives an older man who walks in from the rain, heaving to deliver a black bag spilling over with more books.

It is a usual weekday afternoon at Imge Sahaf, a vast secondhand bookseller in the bustling heart of Kadıköy’s traditional commercial center, where fishmongers compete with herbalists over the attention of passersby along thin, pedestrian alleys in Istanbul. And across from Çiya, the famous restaurant that made a splash on the Netflix series, "Chef’s Table," the stark facade of Imge is replete with vintage magazines and worn novels, outdated nonfiction and obscure journals.

Passing into the opening hall, in which a single bibliophile might fit at a time, squeezing through the overstocked corridors, under the imposing heights of varicolored spines encompassing the erudition of all known civilization, its subjects and epochs are columned to the ceiling, in rows tighter than the concrete slabs of the street. Imge Sahaf, owing to its name (image), has a special cache of art prints and visual ephemera, everything from oil paintings to paper currencies.

And just between the two desks diagonally opposite from each other, as middle-aged men working behind them banter and complain, there is an island of Ottoman magazines, a rare trove of antiquarian delights. The frayed edges of their frail paper borders betray the age of the material, centenarians among the press establishment, representing dawns of cultural fruition at the cusp of popular literacy when academic and religious texts were second to literary humor, news satire and political cartoons.

A precious find for Anglophones

Imge Sahaf holds an unparalleled collection of late Ottoman publications, many of which are labeled with quite comprehensive descriptions in English. Although in the center of the madness between eccentric buyers and talkative shopkeepers, the piles of plastic-wrapped pages gleam with enticing backstories. Under their coverslips are bilingual histories, such as for Kelebek, a literary humor magazine published by one Reşat Nuri Güntekin between 1923 to 1924.

It was said that Güntekin published over a hundred humorous stories in Kelebek, which, in English, means butterfly, and is the name of a current tabloid in Turkey. Interestingly, the writing that appears to outline these historical publications has an editorial voice, someone’s is opining atop it, a hundred years in retrospect, in much the way that the contributors of old might have within its pages.

As a publication active during the formative year in Turkey’s history as a republic, when Ankara was declared the capital in 1923, Kelebek is emblematic of the society, especially in Istanbul, their tastes and concerns. Its stories breathe with the changes that people experienced in their personal lives when history was being written as a series of cold exchanges between wars and governments. For literary historians, Kelebek also rounds out Güntekin’s oeuvre not found in his prolific novels and plays.

While the language reform had yet to take effect, such Ottoman publications as Kelebek are printed in the Arabic alphabet. Another example is a newspaper called, Sinop, with a spare description identifying it as a “very rare newspaper published during the independence war in Sinop.” The newspaper, Sinop has a stark, informative aesthetic, issued in a simple design that likely reflects the urgency of its bridging necessary communications between the military and the people.

Still, there is an unmistakable streak of lightness that runs through the late Ottoman press, at a time when the new facts unrest were less a priority to readers than diversions from their direct experience with those hard facts. Ottoman newspapers such as Gıdık, which means Tickle, show, on its cover, a man in a fez reading and laughing, while a mischievous boy pokes at his back. Its publication began in 1910 and lasted two years. Lighthearted news analysis was punctuated with stories, poems and novels.

Among the samples of vintage Ottoman press are a few fresh starts, including the very first humor newspaper in the Ottoman Empire. It was called Diogenes, after the ancient Greek philosopher of the Cynic school, who urged candid behavior in the face of social norms. The publisher was Teodor Kasap, who is revered on the descriptive paper slipped over its yellowed front page, denoting, in calligraphic Ottoman-Turkish Arabic script, the philhellenic name, unblemished since the 1870s.

Kasap, to the unidentified editorial archivist of Ottoman press at the Imge Sahaf is the “most important and famous journalist of the Ottoman period.” In English, he is known as Theodoros Kasap, of the Rums or the indigenous Greeks of Istanbul and Anatolia. After serving as personal secretary to French novelist Alexandre Dumas, who wrote "The Three Musketeers" and other classics. Throughout his career he would publish in French, Turkish and Greek, depending on the sociopolitical climate.

It appears that most of the Ottoman magazines did not last long, often no more than two years, ostensibly a circumstance of law and economy. One of the most enduring of papers, even at the dawn of popular press, was a publication that stamped its readership on the allure of images, namely “Resimli Gazete,” which might translate to “picture paper,” which lasted from 1923 to 1929. The front page on display at Imge shows a studious Mustafa Kemal Atatürk, the founder of the Republic of Turkey, reading, while a ballroom dance ensues in another room.

Although it is easy to get lost in the entranceway gallery of books and magazines at Imge, especially considering its nonpareil trove of immaculately preserved Ottoman journalism in their original printings, there is an adjacent hall on the top of the two floors that make up the bookshop. It seems bear the namesake of Image, as a sahaf or antiquarian of images. Most of the stock are prints of paintings, with not a few large-format coffee table books on art history. And there is a downstairs.