To read is to see: At a Cihangir sahaf near Taksim Square 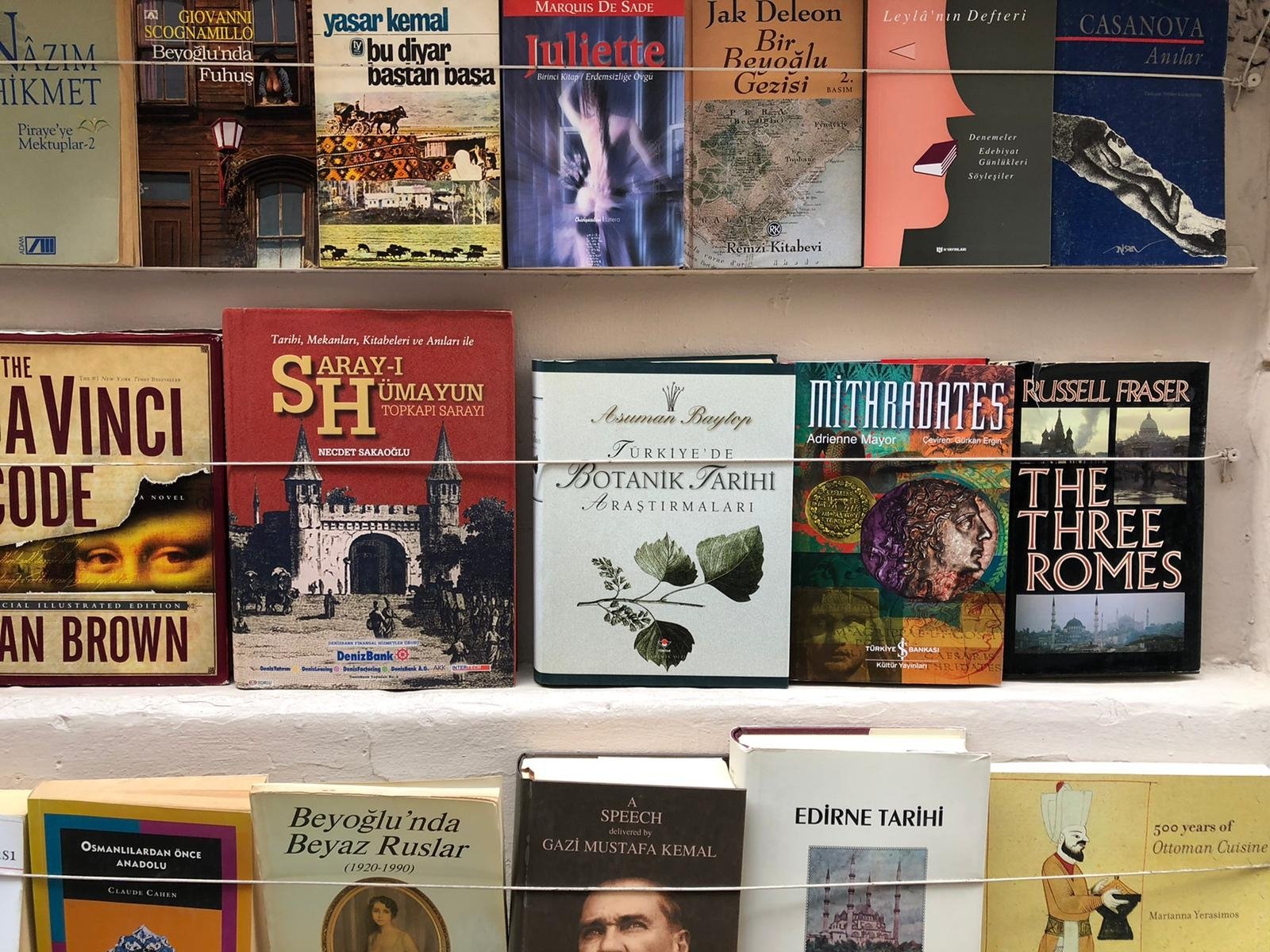 Uğur Sahaf's books are on show, loud and proud, held taut by wires that pin them against the walls of the store, Istanbul, Turkey. (Photo by Matt Hanson)
by Matt Hanson Apr 20, 2021 12:15 pm

On top of a hill leading from the sloping, elegant residential neighborhoods of Cihangir toward Taksim Square, there is a curious secondhand bookstore that is something of a walk-in closet along a side street in Istanbul

When Virginia Woolf came up with the title "A Room of One’s Own," for her extended essay and changed the power balance of women in literature, as in society, the year was 1928, and she was then lecturing at two women’s colleges connected to Cambridge University. It is unimaginable that that momentous metaphor of a room, which came to symbolize female independence, of body and mind, would not have mountains of books in it. But although most of these books might be written by men, it is the solitude of that room as occupied by a woman, that fires the fluid spirit of criticism to a round boil, perfect for steeping tea, and reclining for a day in thought.

At the modest space known as Uğur Sahaf, there is a woman and a cat, and both seem to be well-versed, if not in books then in the art of mentation, surrounded by stacks and shelves of voluminous volumes of text spanning the history of research and the imagination across the known world, and all in a space that might fit five, thin, eager bibliophiles. Uğur is its name, as many sahaf, or used bookstores, in Istanbul and Turkey are named and are as personable and idiosyncratic as any human individual. If Uğur Sahaf were a personality type, they might be very modest, perhaps penniless, but overeducated and polite.

Across from a cafe, and besides a veterinarian, Uğur Sahaf displays its books proudly, held up by wires that stretch, taut, against the exterior wall of an old building, whether used as a municipal office or private residence is unclear, its windows gated, as per Istanbul custom, protecting property from ground floor trespassing. But in opposition to the uninviting ambiance of inner-city crime prevention, the bookshop is as welcoming as ever. Although each of its items is one-of-a-kind, they are sold cheaply, according to the market value of copied copies of books that have long lost any order of distribution or print investment.

The reasons behind placing books outside appear to have many potential motivations. By the look of the homebody bookseller inside Uğur Sahaf, it seems that one could be more likely than the other. For example, to present, in an organized and salable fashion, some of the books in stock in English and Turkish, is, firstly, a formidable sales tactic. Such a strategy has the effect of also building a kind of trust with buyers, and locals, something that a sahaf does well, as its breezy, open space conjures a communal sensibility beyond the capitalist chain to which almost all enact through cold, mechanical, daily transactions. The bookseller of the Turkish sahaf, however, is more aloof. She is in a room of her own.

In a literary state of mind

Another conceivable reason for the outdoor displays at Uğur Sahaf is simply that the bookseller is busy reading, and, instead of pandering to the whimsical questions of passersby, many of who would ask, in Anglicized, heavily-accented Turkish, about books in English. They’re often coming from the swanky apartments of Cihangir down to the floor, to pass their time perusing the worn spines of such irrelevant, news-unworthy titles as “The Three Romes” by travel writer Russel Frazer, whose history of Christian metropolitanism devolves into what a 1985 LA Times book review critiqued as a devolution into an overly personalized diary.

Yet, there are evergreen editions, nonetheless, that greet the bookish urban explorer on their way between Cihangir and Taksim, including savory works by Charles Baudelaire or Umberto Eco. A Penguin Classics issue by Soviet science-fiction novelist Yevgeny Zamyatin, namely, “We,” throws an eclectic spotlight on the characterful trails of Istanbul’s many and diverse interests in literature, as they surface at a sahaf bookshop, remnants of the peculiarly regional taste of writing within multifaceted geography in which languages, histories and cultures misalign and converge with a percussive, postmodern dissonance.

And perhaps the most logical purpose for placing a solid amount of books outside of the shop at Uğur Sahaf is simply because its interior is too compact to hold all of its goods, and the people who might take them away, oftenest one by one, and generally for not much more than a bit of spare change. Among the various staples and obscurities that face the would-be book buyer passing Uğur Sahaf is a title by the late John Freely, whose works remain canonical to early 20th-century foreign erudition on Turkey, produced while raising a family in the hills of Boğaziçi University overlooking Istanbul’s famed intercontinental strait.

Freely’s study, “The Emergence of Modern Science, East and West” at Uğur Sahaf, emerged out of the once fashionable academic branch of historiography tracing the origins of the scientific process beyond the fringes of Western Eurocentrism, prior to Greek philosophy, encompassing Mesopotamia and Egypt, and continuously since, despite the stereotypes of Dark Ages, to emphasize the strength of the bridge that was Islamic civilization, preserving and developing philosophical and scientific ideas through the Medieval era. It is, however, prescient in retrospect, when considering the ongoing lack of mutual reports on all sides.

The woman and the cat are still reading together, unmoving but not stony, comfortable. They do not mind that someone has entered their room because all of the books are penciled in with a price, a few liras here and there passed around by a stray hand that dips down through the doorway of the shop, which, cellar-like, hangs, like low hanging fruit, amid the bustle of Cihangir’s cosmopolitan airs. Uğur Sahaf is divided, essentially into two sections, which are separated by a roughly-hewn concrete stairway. There are carpets and posters on the cavernous walls, sheltering books from floor to ceiling around the entire circumference.

The woman sits with the cat, reading, but they are not themselves open books, as their is presence clouded in a kind of mystique that comes with the antiquarian job. To their left are English books, and a smattering of Russian and French titles. Among the Anglophone books was a slim novel by a Turkish author, Gaye Hiçyılmaz, whose fiction, “Watching the Watcher,” published in 1996, came after a successful children’s book, “Against the Storm,” and an award-winning novel, “The Frozen Waterfall.” “Watching the Watcher” is utterly English in its sensibility, yet there is a streak of Turkish sentiment in its introspective psychological currents.

Although Hiçyılmaz led an illustrious life as a proud mother and daughter, working with the British Council in Ankara for many years before traveling through Switzerland and England, setting perhaps her best-known book, “The Frozen Waterfall” in the small Swiss town of Horgen, her faded success might come as a surprise to readers who have not been privy to the overlaps where British and European fiction graze against the bristling skin of Turkish themes. And yet, if Uğur Sahaf is a testament to readerships in Istanbul, it would seem that at least someone had the curiosity to listen to her voice on the page, even if muffled behind the door to the room of her own life.