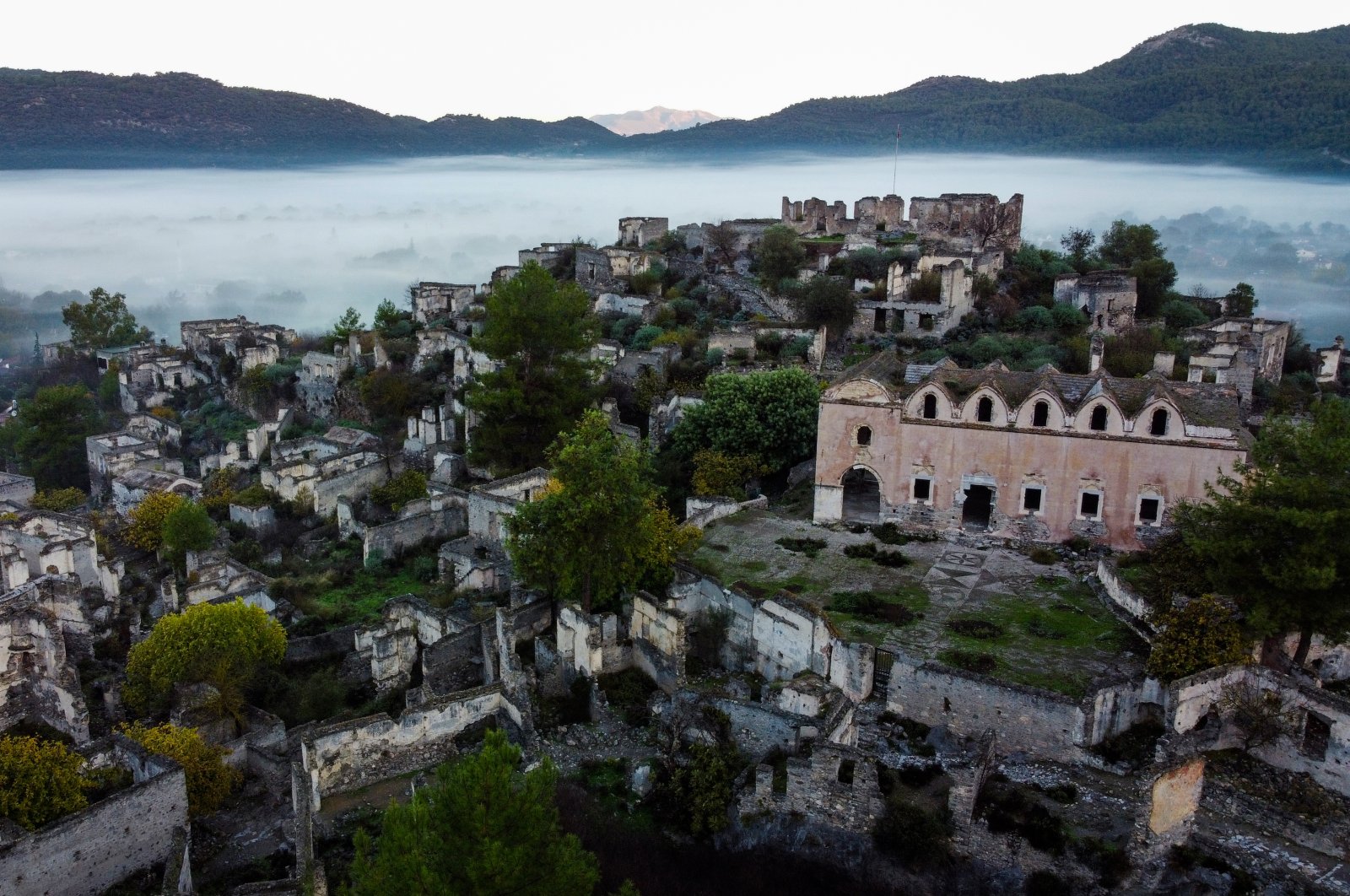 Wondering where to travel in 2021 without risking your own or others' safety? This carefully selected list of historical outdoor sites from around Turkey might give you some inspiration

Happy New Year, everyone! Leaving behind a hectic 2020, we have a fresh 12 months ahead of us to enjoy the outdoors and regain the vivid wanderlust that might have dimmed inside us during the pandemic. There's no doubt that last year was mentally and physically challenging. We all had to quickly adjust to a new way of life, in which we were obliged to stay home and were largely deprived of the activities we were used to doing.

The second and third waves of COVID-19 took us back to the drawing board and made it clear that the impact of the pandemic on our daily life will not abate anytime soon. However, we only have one life, and as long as we fully abide by the hygiene and social-distancing rules, it is safe and refreshing for our minds to voyage in the open air to relieve our fatigue.

To start 2021 on the right foot, I have compiled a list of six must-see ancient heritage sites in Turkey that you should add to your itinerary this year.

For foreign visitors, and perhaps even many local Turkish tourists, the Black Sea coasts of Turkey do not rank among the top-visited locations in the country.

Sümela Monastery is one of the most prominent and unique Christian heritage sites in this "cradle of civilizations." Apart from its importance in Orthodox history, the monastery, nestled in green hills with acres of virgin woods, is primarily remarkable for being built on the nearly 90-degree cliffside of Mount Karadağ.

As ancient accounts suggest, the monastery was founded by two Athenian monks, who contemporaneously had the same dream in which they were shown the location of the monastery by angels. Subsequently, they traveled separately to Trebizond (the ancient name of Trabzon), oblivious to each other. There, they serendipitously ran into each other and decided to build a monastery at the sacred place that was shown to them in their dreams.

Even though undoubtedly, Sümela Monastery is the most well-known tourist attraction in Turkey's Black Sea region, the monastery's name was almost forgotten on dusty shelves due to a 3 1/2-year comprehensive restoration. In 2018, the monastery was reopened to the public, and today, it receives thousands of visitors daily.

A personal favorite of mine in Turkey, the ancient city of Ani, is also called the city of 1,001 churches. It was added to UNESCO's World Heritage List in 2016. However, the main element behind Ani's fame was the commercialization of the Eastern Express train. The scenic train route running 1,300 kilometers (808 miles) from Ankara to Kars has attracted abundant interest, especially from Turkey's young population; however, services are temporarily suspended due to the COVID-19 pandemic.

The ancient city is situated on an open plateau in the eastern Turkish province of Kars overlooking the Akhurian River (locally known as Arpaçay), which makes up the geographical border between Turkey and Armenia. In its heyday, Ani was one of the world's largest cities with around 100,000 residents. The city's name was first mentioned in antiquity in the fifth century A.D., which is also assumed to be the period when the city was founded.

The site boasts dozens of ruins that consist of churches, chapels, cathedrals, mosques and old dwellings. An average tour of Ani would take at least two hours, as the site is quite vast. So, make sure you reserve enough time to see this stunning, unforgettable place.

Although this site is categorized as a medieval Armenian city, you'll also find ruins from the Seljuks, Georgians and other civilizations that were the subsequent rulers of Ani. The rich amalgamation of cultures makes Ani stand out as a very unique site.

According to Turkey's Culture and Tourism Ministry, in 2019, Ihlara Valley was the sixth most visited archaeological site in the country. Ihlara Valley, identified as Peristremma in historical sources, is located to the west of the world-renowned Cappadocia region in modern-day Aksaray. Besides its historical importance, the valley offers some of the most stunning flora and fauna in Turkey.

The earliest inhabitants of Ihlara Valley were the early Christians seeking refuge from Roman prosecution. As they were looking for a safe, secret place to live and practice their religion, they stumbled upon Ihlara Valley in the fourth century A.D. and started living there. Gradually, this hidden settlement grew into a large town with 4,000 dwellings and around 80,000 residents. Overall, there are approximately 10,000 rock-cut structures in the valley.

The valley has 105 churches; however, only 14 of them are open to visitors. These churches hold some of the finest examples of frescoes and wall paintings that depict scenes from Jesus Christ's life and verses from the Bible. The valley itself is 14 kilometers long and 200 meters (656 feet) wide. The walls of the valley reach up as high up as 150 meters.

Before visiting, it might be helpful to be familiar with the multiple entrances to Ihlara Valley. There are four entrances in total. The most popular one is the entrance that the signboards along the road will lead you to. However, you have to climb down more than 300 steps, which might not be the most comfortable experience for some. Two other entrances are in the villages of Belisırma and Ihlara. The Belisırma entrance allows you to enter the valley with your car and can be considered the ending point of the section of the valley meant for tourists. The village of Ihlara is considered the starting point of the valley. The farthest entrance is at the village of Selime, considered the end-point of the valley. This entrance is mainly preferred by hiking groups.

My personal opinion is that the Belisırma entrance offers the most convenient and comprehensive route. The tourist path spans between the villages of Belisırma and Ihlara and covers all the major sites in the valley.

Click to see when and how to visit Ihlara Valley.

Although a newly discovered subterranean settlement underneath the Nevşehir fortress will seemingly acquire Derinkuyu's long-held title of the world's largest ancient underground city, Derinkuyu is still the most popular in the region.

The story of Derinkuyu's foundation is similar to that of Ihlara Valley. In the second century, early Christians fleeing Roman persecution came to the area of Cappadocia and built this city. Knowing that it was unsafe to roam freely outside, the early Christians constructed a massive eight-story underground complex that would offer them refuge from their oppressors.

Before Göbeklitepe's discovery, it was assumed that the transition of prehistoric people from nomadic lives to settlements was induced by the introduction of farming and husbandry. However, Göbeklitepe proved that the people who lived there had settled in one place for religious purposes to be able to practice their beliefs millennia before previously thought. Outdating the pyramids of Egypt and Stonehenge by 7,500 years, Göbeklitepe is the oldest known temple in the world with a history of 12,000 years.

Our final spot, Kayaköy, takes us to the warm shores of the Mediterranean town of Fethiye in southwestern Mupla province.

Kayaköy was a wealthy Ottoman village mostly inhabited by Greeks. The village had its golden age between the 18th and 20th centuries. However, with the population leaving for Greece due to the population exchange between Turkey and Greece as part of the Lausanne Conventions in 1923, the settlement turned into a ghost town. The ruins can be visited today.

In the last decade, owing to the rising popularity of the Blue Lagoon in Ölüdeniz, Kayaköy has come to be known as one of the symbols of the region. Each day the popularity of this ghost town grows as tourists flock to Kayaköy.