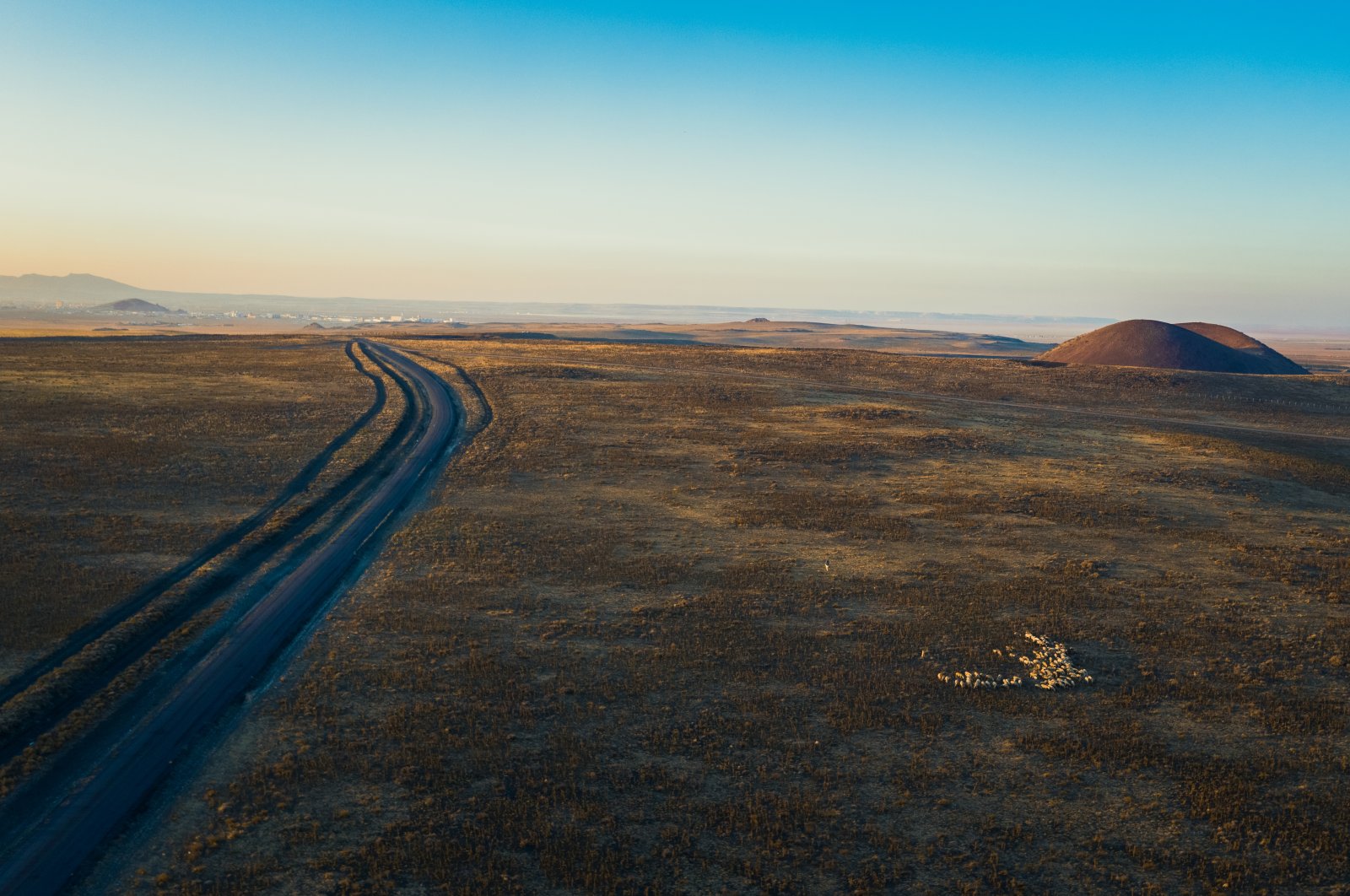 An aerial view shows a long road near Lake Meke, a volcanic crater lake in the Karapınar district of Konya, Turkey. (Shutterstock Photo)
by Ahmet Koçak Jun 25, 2021 11:00 am

North, south, east or west, it doesn't matter which direction you pick in Turkey. They are all equally majestic in natural and historical wonders, but for today let's take a look at the heart of it all from Ankara to Nevşehir and finally Konya

Turkey is a great country for road trips, offering everything from mountains, seas, lakes, and rivers to plateaus and metropolises. It does not matter which direction you pick, there are no wrong choices in Turkey. You are bound to see something you like or enjoy along the road, be it ancient historical sites or natural wonders. However, today I would like to focus on one particular trip around central Anatolia. The ride will take you across Ankara, Nevşehir and Konya to culminate at one of my favorite roads in the world.

Capital for a reason

Ankara being the capital of the city is a good place to start a road trip. The city lies almost in the middle of central Anatolia making it quite easy to travel to a number of cities within a day.

Before leaving the city, there are many places that you may want to visit and may be worth your precious time. Well, the best view of the city is surely from the Ulus district where the tomb of 14th-century Turkish poet and historical religious figure Hacı Bayram-ı Veli is located.

The panoramic views from the top of the hill give you a feeling as if the whole city is laid out at your feet. There are some great examples of historical Turkish and Islamic architecture to be found around the site, from the beautiful mosque with its exquisite Kütahya tiles to the serene tomb of Hacı Bayram surrounded with black and white marble.

Located right next to the mosque is an Augusteum, or the Temple of Augustus and Rome. The ruinous temple still emanates the majesty of long-gone empires. Its history dates back to the first century and is also known as Monumentum Ancyranum.

The monument retains an inscription about the works of Augustus, who was considered the first Roman emperor. The inscription is the most complete copy of Res Gestae Divi Augusti (The Deeds of the Divine Augustus), a monumental inscription composed by Augustus himself as other monuments throughout the empire had disappeared.

The site’s surroundings are also littered with replications of the famous Safranbolu houses adding to the historical texture with their unique and beloved architecture.

The famous Cappadocia, the home of fabled fairy chimneys and stunning balloon rides, is almost a stone’s throw from Ankara. Well, not really, but for a road trip it is pretty close.

One tip before you head out from Ankara, plan your trip in a way that you don’t arrive in Nevşehir at night or else you are going to have to endure the pitch-black darkness of intercity roads like me, and you will miss out on the beauty of the city along the way.

Another tip, once you do get to Nevşehir, do get up early in the morning and head over to one of the numerous hills in the city to bask in the awe-striking beauty of the sun rising upon the vast lands of Cappadocia. Though be warned that those hills are usually very crowded with people waiting to enjoy the picturesque view in the morning.

There are plenty of sites to see in Nevşehir, which is on the UNESCO World Cultural Heritage List. The fairy chimneys are the obvious ones of course but don’t be under the impression that if you have seen one you have seen them all because all these enchanting chimneys lead to different fireplaces.

Each one is unique, from those that were used as homes by ancient people to those that once housed temples. Many have been converted into shops or hotels as well. Also, let’s not forget the stunning balloon rides.

There are many historical spots scattered around Nevşehir apart from the fairy chimneys that used to be residential blocks, with a couple of churches taking the spotlight. However, what I loved most in Cappadocia was simply driving up a hill, finding a nice spot to park the car and enjoying a leisurely walk among the fairy chimneys. During the walks, I often climbed hills and found a relaxing place to let my thoughts wander.

One rarely gets to enjoy such relaxing and serene moments living in big cities. At this point of course it is ideal if you bring along some flasks of tea or coffee, and sip along as you rest your body and mind for a couple of hours. Believe me, it does wonders.

Well, now we have come to my favorite part of the journey. After you leave Nevşehir, if you head east you will soon find yourself in Konya. The flattest terrain you can find in Turkey, and it is beautiful.

Konya province occupies a large area and as it is the largest plain of Turkey, it has some of the straightest highways and roads you will ever see. No need to worry about changing the gear or keeping an eye out for turns and junctions.

Just play some music and bathe in the sublime majesty that surrounds you as the sun shines upon the beautiful farms all around and the road continues straight ahead as far as the eye can see.

Of course, not everybody likes straight roads, it may be sleep-inducing for some and depending on the direction and the time of the day the sun may be shining directly into your eyes which means you are going to have to go straight toward the sun until you reach the horizon.

However, the road offers sights that will be worth your while and you wouldn't want to miss driving on it. After leaving the cacophony of metropolises behind, the serene drive is bound to leave you happy and relaxed instead of the anger and frustration you normally feel while driving in big cities.

There is also much to see once you reach the city itself. The Mevlana Museum, which is in the very heart of the city, houses the tomb of Sufi philosopher Mevlana Jalaladdin Rumi, the founder of Mevlevi Sufi order. It is a very important site of pilgrimage for Muslims who come to pay respect to Rumi and it is a quite unique historical site.

A short distance away scattered across the city are numerous mosques, some hundreds of years old, providing a spectacle for architecture enthusiasts and religious tourists alike with their unique styles and eye-catching baroque designs.

There are some great museums in the city as well, offering insight into the thousands of years of history that these flatlands have seen.

Lastly other than the historical and natural aspects of Konya, one must not forget to please the taste buds with the famous “etli ekmek,” which literally means “bread with meat” but don’t let the name fool you.

It is almost like a pide, a thick flatbread made of wheat flour stuffed with minced meat among other things that is a staple of Turkish cuisine and is sometimes referred to as Turkish pizza. Konya’s delicious “etli ekmek” is much thinner and longer than a normal pide.