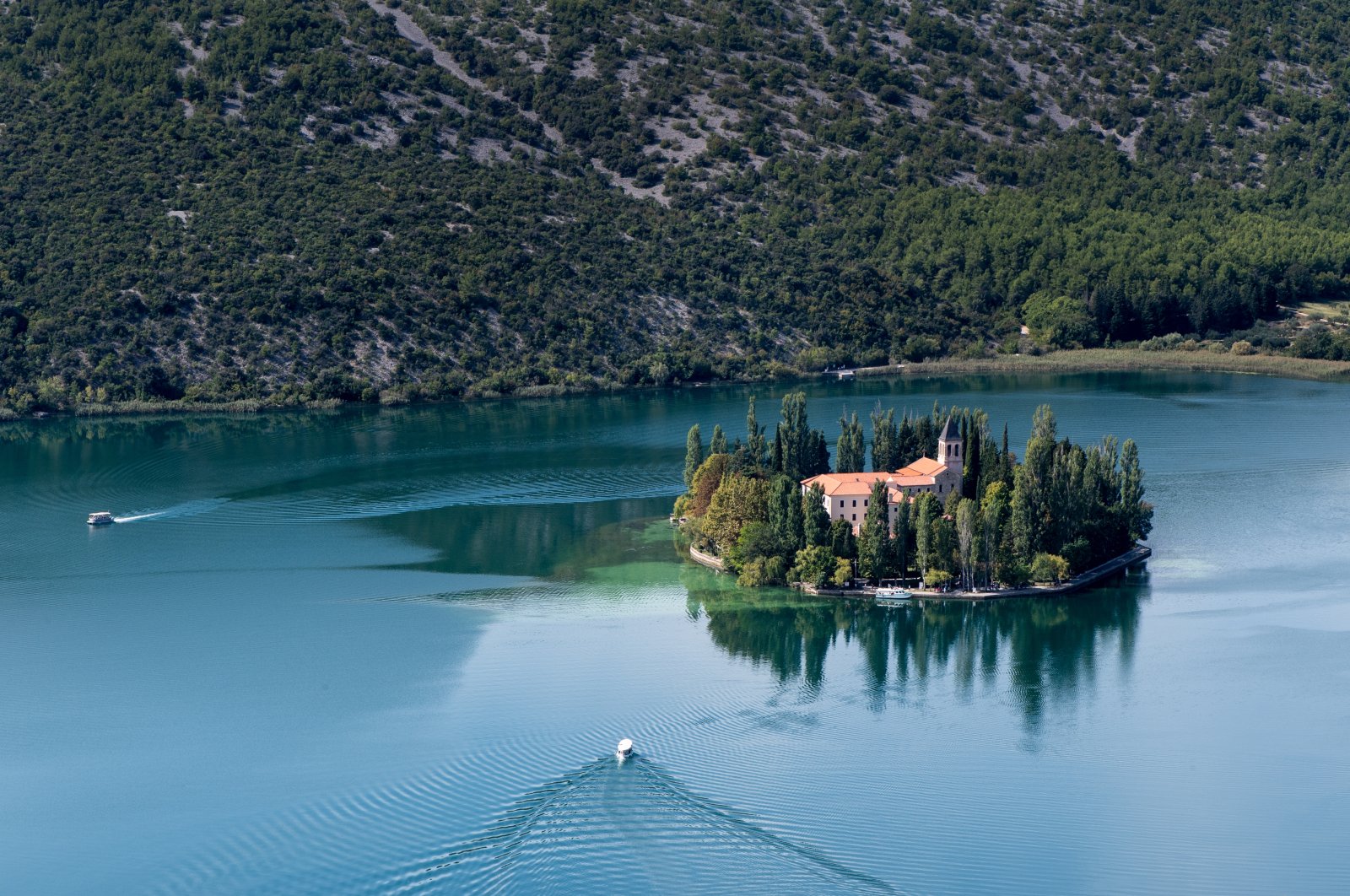 If you want to escape the hustle and bustle at Croatia's Krka National Park, you can catch a boat to the monastery island of Visovac. (Franziska Gabbert/dpa Photo)
by German Press Agency - DPA Sep 27, 2021 10:39 am
RECOMMENDED

When the Kaiser came, crowds of people stood on the hills above the River Krka. They fired pistols in the air, shouting "hurrah!" over and over again. It was the year 1875 when the Emperor of the Austro-Hungarian Empire Franz Joseph I gave his poorest province of Dalmatia the honor of his presence.

An observation platform was built for the distinguished guest, a round pillared parapet above the roaring waters of the river below.

The emperor is said to have stood here for a long time, in awe of the majestic view. Below him, the emerald river cascaded down the Skradinski Buk waterfall, a flight of 17 travertine steps framed by willow and pine trees.

The most famous and beautiful waterfall in Krka National Park reaches a height of 45.7 meters (150 feet), and is 200 to 400 meters wide and 800 meters long, depending on the amount of water. It's such a spectacular backdrop that scenes for several Wild West adventures were shot here, including for film adaptations of German author Karl May's stories.

Bathing fun – but on the wild side

Only the Plitvice Lakes attract more guests to Croatia. But the Krka, allegedly one of the three cleanest rivers in Europe, held a decisive advantage over them for a long time: You could go swimming in it.

Once upon a time, the brave even dived under the water curtain and jumped from the travertine steps into the natural pool. But after a number of tragic deaths, the cascades were closed.

To protect nature, there has been a ban on swimming since January 2021. The course of the River Krka between the towns of Knin and Skradin has been a national park since 1985. Within its borders lie seven waterfalls, old mills, a monastery on an island and the ruins of a Roman military town. Day trippers only get to see a fraction of what's on offer. To see everything, you'll need to take your time to explore – just as the emperor did almost 150 years ago.

The Krka has not always been so idyllic. There was once an industrial estate on its banks, powered by the waterfalls. "Nobody wanted to live here," says Veronika Milin. "It was much too loud."

Milin leads the way into a stone cove, to the "oldest washing machine in the world": a basin in the rock floor into which the river water was channeled in such a way that it was able to circulate quickly.

People have been washing their bedclothes and blankets here since the 17th century. The poor, who lived in houses with no water, came here with their laundry up until the 1980s. Even more important, however, were the mighty stone mills, which local farmers have used to grind grain since ancient times. Other rivers dry up in summer, but the Krka carries enough water to power the mills all year-round.

Today the renovated stone houses from the 13th century are a museum. Young women in traditional Dalmatian clothing stand around on the stairs and paved squares. If you ask nicely, they'll be happy to sit down at the loom inside and grab the spindle. Colorfully patterned carpets and bags hang on the walls of the weaving room.

The island of the gardening monks

If you want to escape the hustle and bustle at the heart of the national park, you can get a boat to the island of Visovac. The boat ride over the lake of the same name is wonderful and the island an oasis of monastic tranquillity. In 1445, the first Franciscan friars fled here from Ottoman troops. The island was then known as Lapis Alba, or white stone. Back then, it was little more than rocks, before the Franciscans founded their monastery and began to fill with earth and grow fruits and vegetables. They collected rain in a tank because the water seeps through the limestone soil.

Tomatoes, aubergines and courgettes grow in the monastery garden to this day. Visitors to the island take a stroll under cypress and plane trees. To not disturb the peace too much, visitors are only allowed to stay on the island for half an hour. It's not much time to see all the treasures in the monastery museum.

The further north you drive in the national park, the quieter it gets. Hardly anyone gets lost after Burnum. It was not until 2002 that archaeologists discovered an ellipse made of rubble on satellite images, framed by a small wall, overgrown by bushes and trees.

The find above the Krka was a sensation: a well-preserved Roman amphitheater. From 2003 to 2005, researchers excavated the area.

Today it is the center of an archaeology park with a new museum, which has so far attracted few tourists. Most of the camp is still covered with earth and dust, but a new museum that opened in 2010 has artifacts found in the amphitheater on display.

Historians estimate that around 30,000 Romans lived in Burnum. They certainly chose a good spot: high above the riverbank, with a wide view of the gorge – and of the Manojlovac slap, the highest waterfall on the Krka. Its travertine steps reach a height of almost 60 meters.

A new path leads to a lookout point, where a plaque on a rock commemorates Franz Joseph I. The emperor made sure not to miss out on this fantastic view.