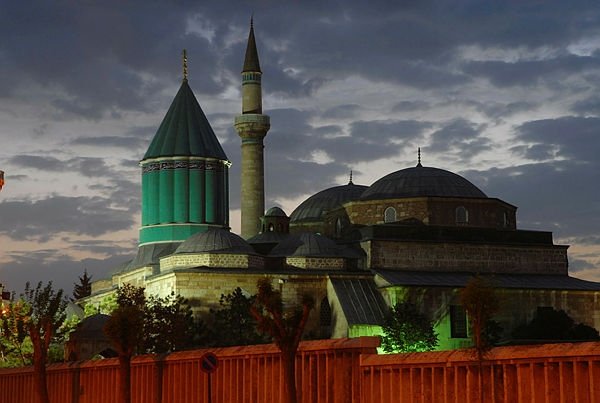 If you decide to travel to the Mevlana Museum in Konya on a Thursday night this summer you may see an unusual sight: A dozen or so whirling dervishes dancing among the roses of the garden.

This COVID-19 friendly religious ceremony is performed by the International Mevlana Foundation (UMV), in coordination with the Konya Metropolitan Municipality and the Ministry of Culture and Tourism. Entry to the ceremony is free, and no reservation is required beforehand. The event is also live-streamed on the foundation’s YouTube channel, for those unable to travel to Konya due to travel restrictions.

Mevlana Jalaluddin Rumi, known by admirers as “Mevlana” (our master), was a Sufi saint and scholar of the 13th century. While he was born in Khorasan, now part of modern-day Afghanistan, the scholar lived, taught and wrote most of his works in the city of Konya, now part of the Republic of Turkey. The magnificent tomb built around his final resting place receives thousands of eager guests every day.

The whirling dervish ceremony, more commonly known as the Mevlevi “Sema” ceremony in the Islamic world, is a religious ceremony that follows the teachings of the Sufi saint. Employing music, prayer and dance, dervishes who perform the ceremony aim to become one with Allah.

The rose garden around Mevlana’s tomb has particular importance for lovers of the Sufi saint. Upon his death, Mevlana was buried in the rose garden of the Sultan of the Seljuk empire, Alaeddin Keykubad. Later, a tomb and a surrounding dervish compound were built around his final resting place. However, a rose garden still surrounds the tomb.

Speaking to Daily Sabah, Esin Çelebi Bayru, the vice president of the International Mevlana Foundation and a 22nd generation granddaughter of Mevlana Jalaluddin Rumi, said: “We have been coordinating this event for years, but this year it is particularly appropriate. Thanks to our venue in the open air, we are able to enjoy the atmosphere of this historical ceremony in peace. Our bodies can remain healthy inshallah – Now it is time to make our souls and minds healthy!”

The foundation is a UNESCO-accredited nonprofit nongovernmental organization. Formed in 1996, it aims to preserve the teachings of Mevlana Jalaluddin Rumi and the culture of the Mevlevi Order.