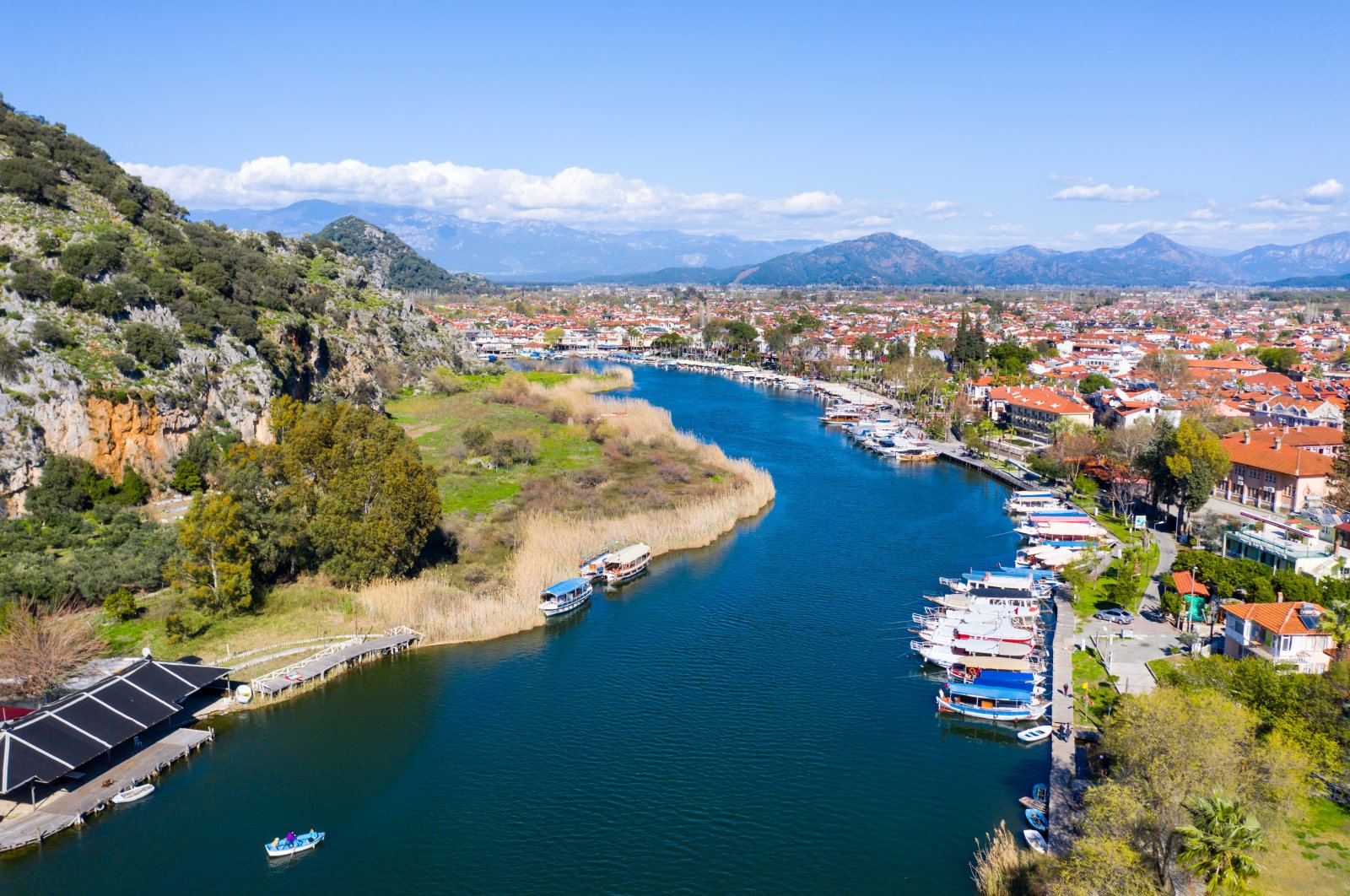 Dalyan is a popular tourist destination in Turkey. (Shutterstock Photo)
by Leyla Yvonne Ergil Jun 17, 2021 9:37 am

Incredible boat tours, historical sites, clean beaches and the beautiful nature of this hideaway will not leave you indifferent

Off the beaten path from Turkish vacationers, Dalyan is a secret hideaway for those in the know and it happens to be one of the most spectacular towns to visit in Turkey. Set against the backdrop of 3,000-year-old rock tombs that sit atop the Dalyan Strait – a long river that connects Köyceğiz lake to the north and Iztuzu Beach to the south – this picturesque town is one of the best places to visit in the country.

Dalyan is actually a popular destination among expats, with a significant population of U.K. and Dutch nationals living there year-round. It takes a certain type of person to love this place as there are no shopping malls or beach clubs close by, yet there is tranquility and ease to the spectacular mountainous backdrop and the beautiful Dalyan River with its unique-shaped boats passing by. It has remained off the radar of luxurious Blue Cruise tours due to being slightly inland and connected by maze-like channels to the sea.

That sea, by the way, just happens to be the miraculous Iztuzu Beach, a sensational 4.5-kilometer (2.8-mile) stretch of untouched sand with the Mediterranean Sea on one side and small lakes and channels nestled in reeds that lead through to the Dalyan Strait on the other.

The drive to Iztuzu Beach passes a lake, a hilltop viewpoint of Radar mountain that offers a spectacular look at the river leading into the sea and the village of Gökbel. It is a spectacular 20-minute trip up and down one of the rare hilly roads in the region, landing you on the left bank of the beach. This is the side where the Turtle Rehabilitation Center and Museum and Captain Junes Hut are, the latter being kept in honor of British expat June Haimoff who worked alongside environmentalists such as David Bellamy and even Prince Phillip to secure the region as a protected zone for the Caretta caretta and green turtles that nest there each year from May to November. This part of the beach hugs a magnificent steep mountain range and a lake. Stakes are set up to inform visitors of where the turtles have laid nests and there are just a handful of sunbeds laid out relative to the vast kilometers’ worth of sandy beach. The sea, while shallow, almost resembles an ocean with its multiple levels of breaking waves. There is a facility to purchase beverages, but other than that the beach remains undeveloped and spectacular in its vastness and glory. There is a 15 TL ($1.74) parking fee, but visiting the museum and rehabilitation center, where you can actually check out some of the turtles being cared for is free to the public.

While Dalyan has remained off the Blue Cruise route, that doesn't mean that there is no boat culture. Dalyan has its own unique boat services that are integral to the lifestyle here. Most of the boats in Dalyan have alterations to avoid harming the turtles, as dictated by Captain June herself, resulting in a variation of 10 to 15 meter (32 to 49 feet) boats that have wide decks for ample seating. There are also a number of small vehicle ferries complementing the wide range of boat services available. People actively use these boats for transportation with a number of ferry routes regularly servicing Çandır on the west, which connects by road to Köyceğiz. It has mud baths and also houses the ancient town of Kaunus and the rock tombs themselves.

There is a regular ferry service that runs to the opposite side of Iztuzu Beach, which is the northwestern end and only accessible by boat. Stretching 4.5 kilometers, the beach there is so long it would take hours to get from one side to the other and back. By boat, this particular route takes you from the town of Dalyan along the rock tombs and through the channels of mystical reeds to the beach, where you jump off, do your thing and then get back on a boat to return. The trip takes approximately 20 minutes and costs TL 30 for a return ticket.

So, while Dalyan does not have a marina or a strip of beach with buzzing beach clubs, just a short distance away there is a unique and natural beach experience. Also of note, down a windy road to the cove east of Iztuzu Beach is Kargıcak Bay, a smaller beach protected by mountains with a cool and laid-back beach club of the same name.

While it is true Dalyan is famed for the landscape of mountains that encircles it, including the impressive rock tombs commandeering the town, the area where daily life takes place is surprisingly flat. This, in addition to a number of roads with dedicated bike paths, has resulted in an active bicycling culture and bikes serve as the main form of transportation for many of its residents.

The town center itself spans less than 5 kilometers from end-to-end along the river, which is lined by a series of picturesque restaurants and hotels, equipped with platforms and seating extending over the lake. Two of the most spectacular municipality cafes are also situated at optimal spots along the Dalyan River. The street parallel to the river is the town’s main tourist zone – equipped with cafes, ice cream parlors and shops selling clothing and souvenirs. The streets inland are filled with local retailers, casual restaurants and shops selling home goods and necessities and anything beyond can be found in residential areas.

Homes in Dalyan range from villas with pools to detached ranch-style homes to quaint two to three-story apartment complexes. Like the roads, the architecture is predominantly flat and simple and for the record, there isn't a single elevator to be found in Dalyan – let alone a mega all-inclusive resort. Instead, there are a handful of comfortable and casual hotels that line the river and a couple of spa resorts that thrive on the thermal waters. Foreigners, however, tend to rent out or own many of the spacious villas with pools that are scattered throughout the town.

Another activity to do in Dalyan is visit thermal mud baths and hot springs, of which there are two in operation. One is close to Dalyan in Çandır, the village across the river, while Sultaniye Kaplıcaları is located on the banks of Köyceğiz Lake. While both are accessible by road, traveling by boat is even more of an exhilarating experience, and there are a number of ways to do so. There are multiple boats that offer private tours as well as car ferries to take you across the river.

The Dalyan farmer’s market is now held on Wednesdays (previously on Saturdays) while the market in Köyceğiz is on Mondays and offers a larger variety. Luckily, there is also a ferry boat that goes from Dalyan to the market on Mondays, albeit just for passengers. Costing just TL 50, a return ride across the expansive Köyceğiz Lake after a few hours of shopping on foot is far more enjoyable and appealing than driving.

With all the fanfare over the river, beaches and boats, let’s not forget that Dalyan's ancient site of Kaunus and mountain rock tombs are both extremely exciting to visit. Not only can you cross over in a little rowboat – using a ferry-like service costing approximately TL 5 for a return ticket that makes it possible to cross over from the riverbank garden of the central municipal tea garden to “The Other Side,” literally. There is a gözleme restaurant on the Çandır side of the river, which is actually named “The Other Side.” From there the walk to the ancient site of Kaunus takes between 30 minutes to an hour and on the way it is possible to observe the rock carvings from a much closer vantage.

A popular Dalyan pastime, there is a lovely walk along the river on Sevgi Yolu, which is lined with trees providing shade all day and rustic restaurants and hotels with deck seating along the river overlooking individual docks for boats.

Where to stay: All options are situated on the lake, however, hands down Holiday Hotel has the best view and breakfast as well as a relaxing garden in which to enjoy them. Berg Hotel has more upscale rooms and a spectacular second-floor terrace overlooking the tombs, lake and town.

What to do: For private tours or boat trips to the beach and market, Tomas Boat, run by a British-Turkish couple, is a great option. Otherwise, for full-on excursions, Volkan’s Adventures’ is the best organization to take off with. For hiking, Mountain and Seas are an organization that takes adults and children on hikes.

Where to eat: For your morning coffee, go to Books & Cookies before heading to Nazo's to lounge in a super chill setting with great beats spun by one of the four friends who run the bar, who also happens to be a well-known musician. Together, these four friends have created an energetic and welcoming space with a comfortable garden area and atmospheric seating shaded by a massive weeping willow. For a casual dinner, Backyard is a rustic spot in town that is a popular stop for its laid-back vibe, pool table and burgers. For dinner at the lake, La Boheme is the fanciest in town, while Okyanus is the most inviting.