Over the hills and far away: A journey of rediscovery in Istanbul 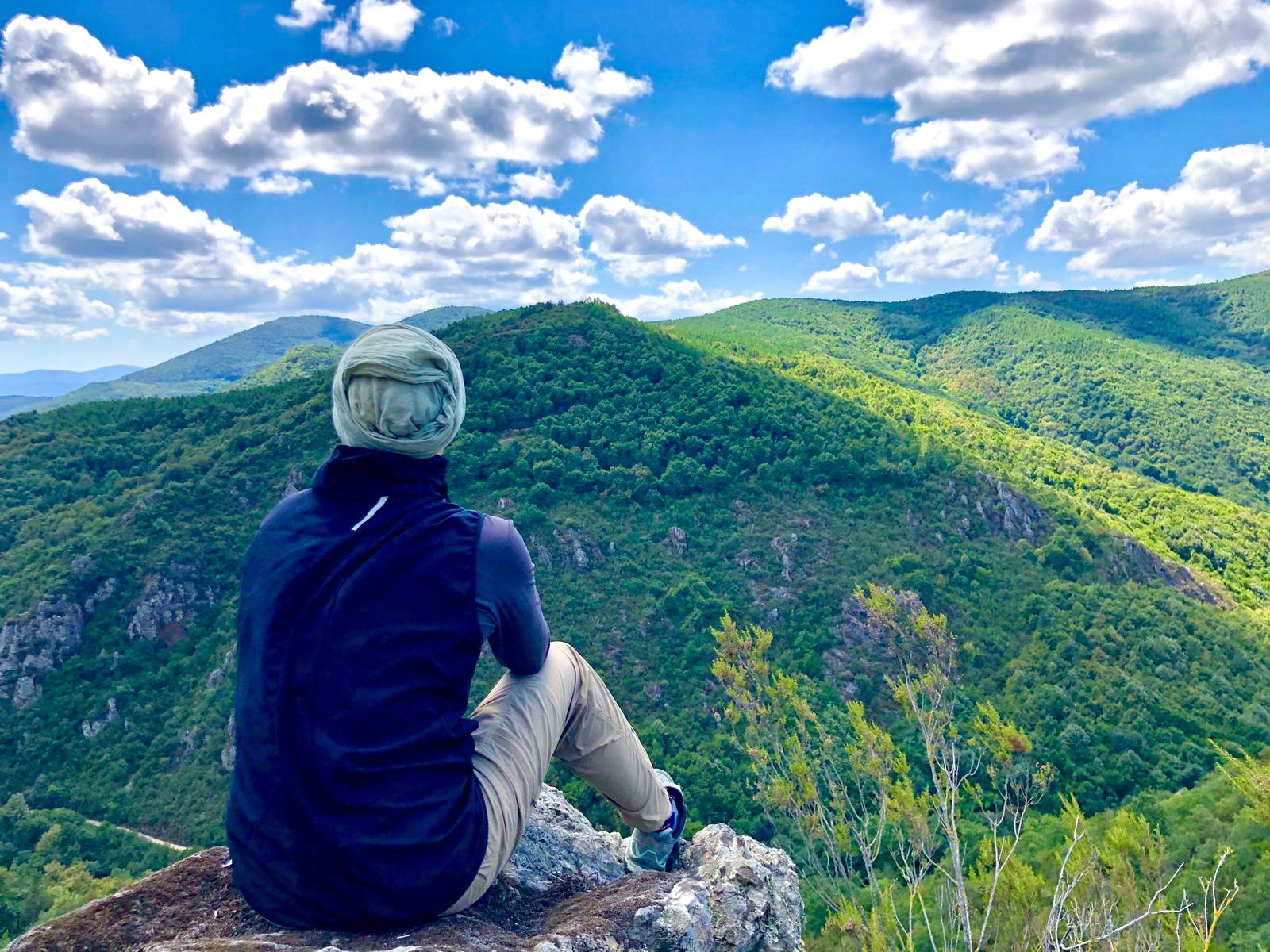 Take any image on the internet after searching for "Istanbul" and you will see it depicted by landscapes mixed with mosques and a metropolitan skyline of high towers and tightly packed houses, notwithstanding the Bosporus dividing the city into two continents. Due to its location, Istanbul is a city for thalassophiles, or lovers of the sea. There are plenty of coastlines to find a spot for a peaceful sit and chill by the water, and many Istanbulites can enjoy their daily commutes on ferries between Asia and Europe. Moreover, the bazaars are filled with fresh fish all year round, my favorite being hamsi, the Black Sea anchovy, which I would eat fried with some flour, salt, and butter as a crisp delicatessen.

After about four years of expat life in Istanbul, enjoying the Marmara and the Black Sea surrounding the city started to lose its charm for me. Even though I come from the so-called "land of thousands of lakes," Finland, water has never been my element. For some reason, I have always been more drawn to the green instead of the blue. Long walks in the forest with a dog, trail running, trekking and berry picking have been my to-go free-time activities I would opt for during weekends to recharge my batteries. Today, forest bathing, as initially a Japanese concept, is well-known for its physiological and psychological benefits and is advertised as the newest fitness trend for more mindfulness.

However, in Istanbul, access to green spaces was a bigger problem than I had initially realized when I moved into town in 2014. The partly quite large forest areas appear on the map in the margins of the city borders, and as we all know, without a private car, public transportation will take a big chunk of your day if you decide to venture your way from one side of the city to the other. It had always been very off-putting to have to think of being jammed in the traffic after a nice refreshing day in the woods.

In late 2018, I was going through a significant life change that allowed me to define myself anew in the city, what I did with it, and in it. I worked an excellent job at the university, studying for my Ph.D., but I felt like I had to rearrange at least the little free time I had on weekends. A couple of times, I had joined a small group of ladies that I got hooked up with through a common friend for trips to the surrounding mountainous areas. Oh, how I had loved those trips! But we undertook all those trips in a private car. However, my desire to get more into nature was not letting me give up hope despite me not having even a driver's license. After a short search by trial and error on the web, I found a profoundly serious-looking hiking club that organized trips on Saturdays and Sundays with experienced group leaders and transportation. So, I registered myself as a member at Istanbul Doğa and booked myself a seat for the next trip.

I remember going for the hike incredibly nervous, as I thought that my poor Turkish would most probably be an obstacle in getting along with the native hikers in the group. But, the life change, the new me – that meant acquiring new communication skills as well. So, I told myself to get my game together and start integrating. I remember the awkwardness during the introductions round before the hike. Quite the contrary to my expectations, I discovered that my co-hikers were very much excited to have me among the group and were eager to ask questions about Finland. I quickly realized that "The Country of White Lilies" is in Turkey, a well-known book on my country's history. I am a little ashamed to admit it, but I am still to read it myself.

I started joining Istanbul Doğa regularly, and with every kilometer we walked up and down the hills, my Turkish got better. It was speaking skills training at its best: during a seven-hour hike, you cannot really do much more than converse with others. While I was putting one foot in front of the other, collecting memories with the dust and mud of the trails, I also learned about Turkish people, their diverse thoughts on religion, politics, arts and culture, more than I had learned during my whole time in the country. I acquired vocabulary that I doubt even my Turkish teachers would have thought about when their mission was to prepare us for the life ahead in the Turkish society. For instance, after a couple of hikes, I was promoted to be the rearguard, an "artçı" – the irony of my "promotion" being that I was to stay as the last of the group, yet with responsibilities as I was to make sure that no one stayed behind, and everyone was following the trail. I learned how to discretely communicate that I needed a break, a "çicek molası." During one of the pre-hike briefings in late winter, I was told to let the group leader know if I wanted to go and "pick flowers." I asked which flowers they expected me to find in the forest that time of the year and got a laugh from the others. In Turkish, going to the loo is all about flower fields.

The hikes brought a new kind of structure to my week and became almost like a ritual that had a deeper meaning for self-empowerment than I could have expected. Getting up at 5 a.m. on Saturday or Sunday morning to catch the shuttle bus nearby the metrobus line became a weekly event I was looking forward to. I remember starting to find joy in seeing known names on the participant list because I knew that we could pick up our conversations from where we last left them. So, after a dozen of hikes, after humbly bragging about my newest hobby to everyone I met, I realized that none of the international students I knew in the city hiked or even had heard about the diverse mountain tops I visited with my Turkish group. I started to think how they were missing a significant part of living in Istanbul, and generally, I dared to say, of life! I had noticed how being in nature at least once a week for the whole day had changed me positively. Moreover, hiking had also made me more knowledgeable about the surrounding regions and how to navigate by using the outdoors application Wikiloc, for finding, recording and following trails. These were skills that I was keen to share with those less experienced with the outdoors as I had become more confident about the idea of becoming a group leader myself.

Around the same time, in early 2019, a new initiative for a collective project started to bloom in Istanbul. The Istanbul Muslim Collective began to take shape as a movement of international students and young professionals who wanted to create a new form for community-building and peer support, which would gather the thousands of our likes. During the early days of the Collective, I posted in the Facebook group an inquiry about others interested in joining me on hikes in the city. Our first exploration was around the Sazlıdere Dam, a water reservoir in the outskirts of Başakşehir. As we walked from the Şamlar village to Arnavutköy, we ended up sharing our last kilometers with two local chaps who were more than surprised when they saw us surfacing out of the woods. We were slightly confused about the "trail" on our map that eventually appeared to be lost to view due to dense overgrowth – onto a farmer's field where they had been killing their time that Saturday.

By trial and error, I got used to recognizing hike-able areas in and around the city and choosing recorded trails according to season and their practicality. By the fall of 2019, the Istanbul Muslim Collective hiking group had started to gain more and more interest. The number of participants who wanted to join our walks grew so much that I could not anymore handle the groups alone. With more than 10 people, it is better to have a helping hand, especially if the group encounters any difficulties along the way that might require the full attention of one group leader. So, I got myself a co-leader. Together we encouraged dozens to join and meet Istanbul from a whole new angle.

Most of our trips, however, were restricted due to the pandemic. Suddenly, we had to make sure to stay within the city borders. Yet, as cliched as it sounds, everything happens for a reason. We explored Polonezköy and the Belgrade Forest in and out, all the way to Kemerburgaz, not forgetting to discover the fantastic pieces of history along the way. Numerous aqueducts are hidden in the woods and keep the Byzantine and Ottoman past to learn about, staying however less attractive for tourists than the famous landmarks in the city center. A spot that I especially enjoyed showing to the others was the very much underrated Ballıkayalar Park in Gebze. While most visitors spend their day at the picnic area by the mouth of the canyon, those looking for an outdoor buzz of another kind should take the hike through the canyon. To benefit from the numerous creeks flowing through Istanbul, we went for water hikes during the hotter summer days in Çatalca or Kocaeli. The Çınarlıdere picnic grounds and trail in Derince took us even to a natural waterfall pool for a fun swim intermingling with the local youth who knew how to ascend to the pool with a rope from the mountain trail. We also discovered a view over the city that makes the Galata Tower jealous from the hilltops of the Aydos Forest, to which the trailheads are easily reachable by city buses. However, my personal favorite was the hike in Ağva, where we spent hours on a private beach and offering me a swim in the Black Sea for the first time in my life. The cliffs around the area left me speechless, and I realized that Istanbul, just like Turkey, is diverse not only in terms of the cultures the different districts have to offer but also in its outdoors. This realization changed my perception of the city forever. Today, anyone who visits Istanbul and comes to me for touristy advice leaves with instructions for at least one easy-to-organize local day-hike.

I say it bluntly, but Istanbul is a harsh city for those not used to metropoles. It took me five years until I figured out how to make the best out of it. The secret to a successful life anywhere we are lies in understanding that we can create our own opportunities. As Turkey enters a new full-lockdown period of 17 days, many will be looking forward to the upcoming trips and travels. The pandemic and travel restrictions have put an end – or at least forced a postponement – to many wandering dreams. During 2020, I was almost "forced" to explore the curves and corners of Istanbul that I otherwise would not have given the attention they deserve. But as one of my favorite quotes by the French novelist Marcel Proust goes, "The real voyage of discovery consists not in seeking new landscapes, but in having new eyes."