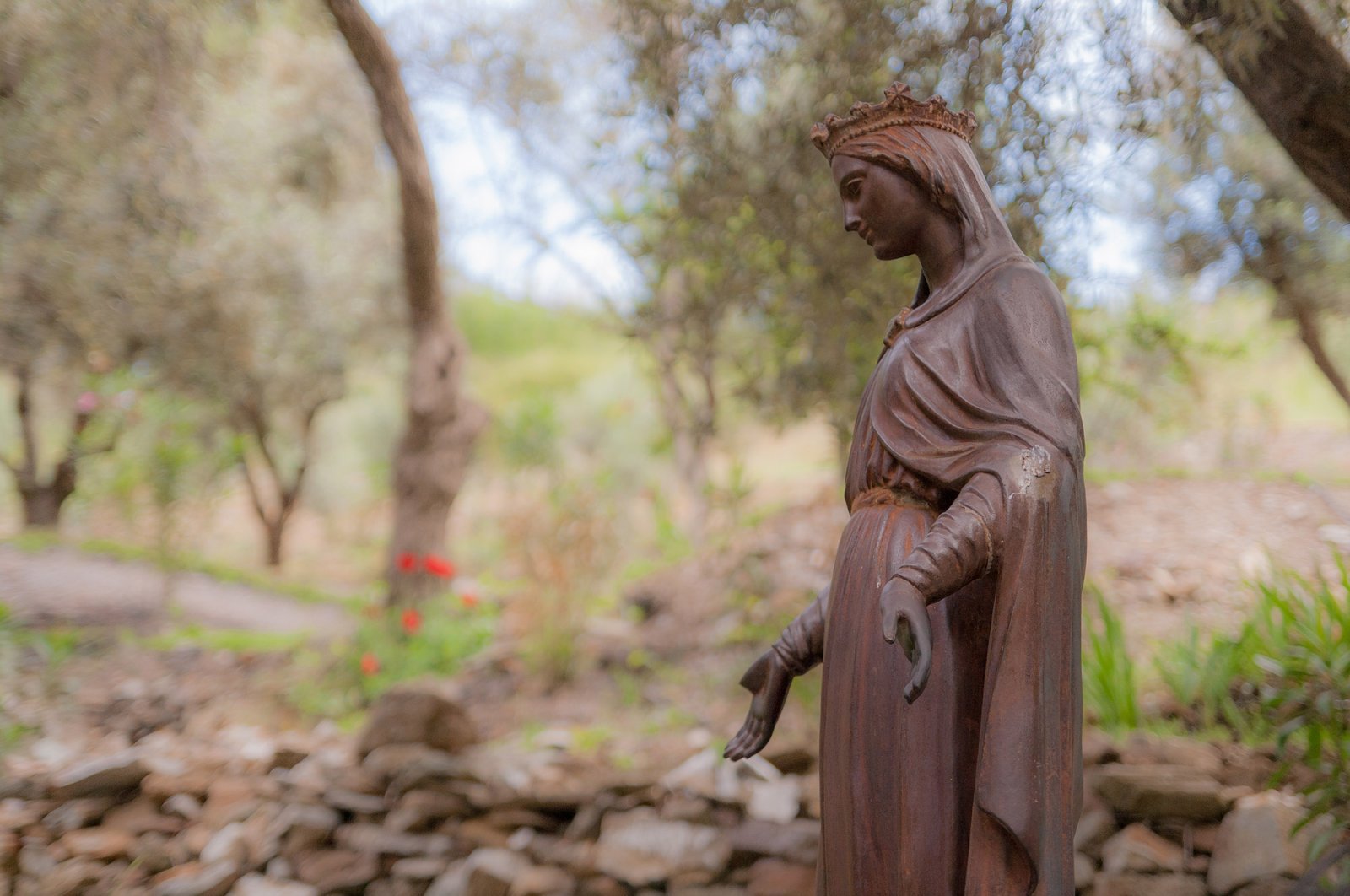 A figure of the Virgin Mary placed on the way to her house in Izmir province, Turkey. (Shutterstock Photo)
by Asene Asanova Nov 19, 2021 8:44 am

Exploring the marvels of Turkey's western Izmir province with its glorious history from the revolutionary Neolithic, the divisive Hellenistic and the influential and transformative Roman periods

The Aegean coast of Turkey has so many beautiful places and choosing which one to visit, especially if you have limited time, can be a little challenging. The Izmir province itself has dozens of historical and natural attractions and fitting them all in one day would be impossible even if you have a car.

A few weeks ago I had a chance to visit Izmir for a two-day getaway and even though I wanted to see every single touristic place possible, I had to choose three or four locations as I wanted to relish every moment in the province.

Technically, you can probably see more in one day, but I would not recommend it as it's important to enjoy each location in peace and not be in a constant rush to hit the road as soon as possible.

So, the first location, of course, was the great ancient city of Ephesus. I would consider it a crime if you come to Izmir and skip Ephesus. The ancient city is one the most renowned historical attractions in Turkey and is nowadays gracing the Selçuk district of Izmir on Turkey's western shores.

Thanks to its exceptionally fine climate and favorable location that helped it become a bustling port city where trade, intellectuals and administrators would meet, Ephesus bore witness to many cultural traditions from three different epochs – the revolutionary Neolithic, the divisive Hellenistic and the influential and transformative Roman periods.

I visited Ephesus for the first time almost 10 years ago and back then, when we had no idea what COVID-19 is, the city was filled with tourists. I remember waiting in line to be able to take a picture in the most famous places of the ancient city and walking with hundreds of people through the ancient streets. Even with all the crowd at that time I was absolutely mesmerized by its history and I always knew that I will come back to see it again. Ironically enough, I got a chance to go there this year amid the ongoing pandemic. And believe me, when I say, it was different this time. It was a little surprising for me when I saw no queues at the ticket office next to the entrance as from what I remember the place was always brimming with tourists waiting for their turn. I was surprised to see that inside it was no different. Just for comparison, in 2019, the last pandemic-free year, with approximately 2 million visitors, Ephesus was the most visited ancient city in Turkey. It was nice to have the city all to myself, with no one around. The silence made me dive into the ancient atmosphere and enjoy the views.

My personal favorites in Ephesus are the Celsus library and the huge 25,000-seat theater. They never fail to impress. The library is considered an architectural marvel, and is one of the only remaining examples of libraries from the Roman Empire. The Library of Celsus was the third-largest library in the Roman world behind only Alexandria and Pergamon, believed to have held around 12,000 scrolls. Celsus is buried in a crypt beneath the library in a decorated marble sarcophagus. The interior of the library and its contents were destroyed in a fire that resulted either from an earthquake or a Gothic invasion in 262 C.E. and the facade by an earthquake in the 10th or 11th century. It lay in ruins for centuries until the facade was reerected by archaeologists between 1970 and 1978.

The theater of Ephesus is believed to be the largest in the ancient world. This open-air theater was used initially for drama, but during later Roman times gladiatorial combats were also held on its stage.

Ephesus also had several major bath complexes, built at various times while the city was under Roman rule.

In the first century, Ephesus started playing a pivotal role in the introduction of Christianity and became an important center for the religion's early days. It is from here that the monotheistic religion spread under Roman rule.

Meanwhile, 7 kilometers (4.32 miles) from Selçuk, located just outside of Ephesus, is the humble stone-built House of Virgin Mary, or Meryem Ana, as it is known in Turkey. It is considered one of Christianity’s holiest sites and is also an important site for Muslims.

Legend has it that Mary, Jesus' mother – taken to this stone house by St. John – lived there until she ascended to heaven, according to Catholic beliefs.

The house received the title of an official place of Catholic pilgrimage in the 1800s after years of debates. If you aren’t still convinced of the site's holy status, perhaps you’d accept three papal visits as testament. Pope Paul VI, Pope John Paul II and Pope Benedict XVI all visited the site in 1967, 1979 and 2006, respectively.

Last month, Microsoft founder and the world’s fourth-richest person, Bill Gates, visited the southwestern shores of Turkey with his super-luxury yacht and also came to see the House of Virgin Mary.

The ancient city of Ephesus is also believed to be the location where the story of the Seven Sleepers took place. According to Muslims, Catholics and Orthodox Christians, the seven sleepers slept in a cave in Ephesus for centuries because they were persecuted for their belief in Jesus Christ.

Şirince is one of the oldest villages in the Izmir province.

The village of about 500 inhabitants made headlines in 2012 as a safe haven for people fleeing a looming catastrophe, Doomsday. Along with a French village, Şirince was thought to be one of the only two places on earth to be spared if the Mayan prophecy interpreted by New Age spiritualists were to be true and the world were to end on Dec. 21, 2012.

Hundreds, if not thousands, waited out the day at the village – helping bring in revenue to the quaint thought-to-be sanctuary.

Today, Şirince attracts people from the big cities and tourists looking to escape the hussle and bussle of city life and take a sip of fresh air. The village nestled in lush nature has a number of houses, some over 100 years old, which have been converted into small hotels for visitors to stay. Its some 45 hotels and lodges can accommodate up to 500 visitors and usually see a boom in bookings on the weekends.