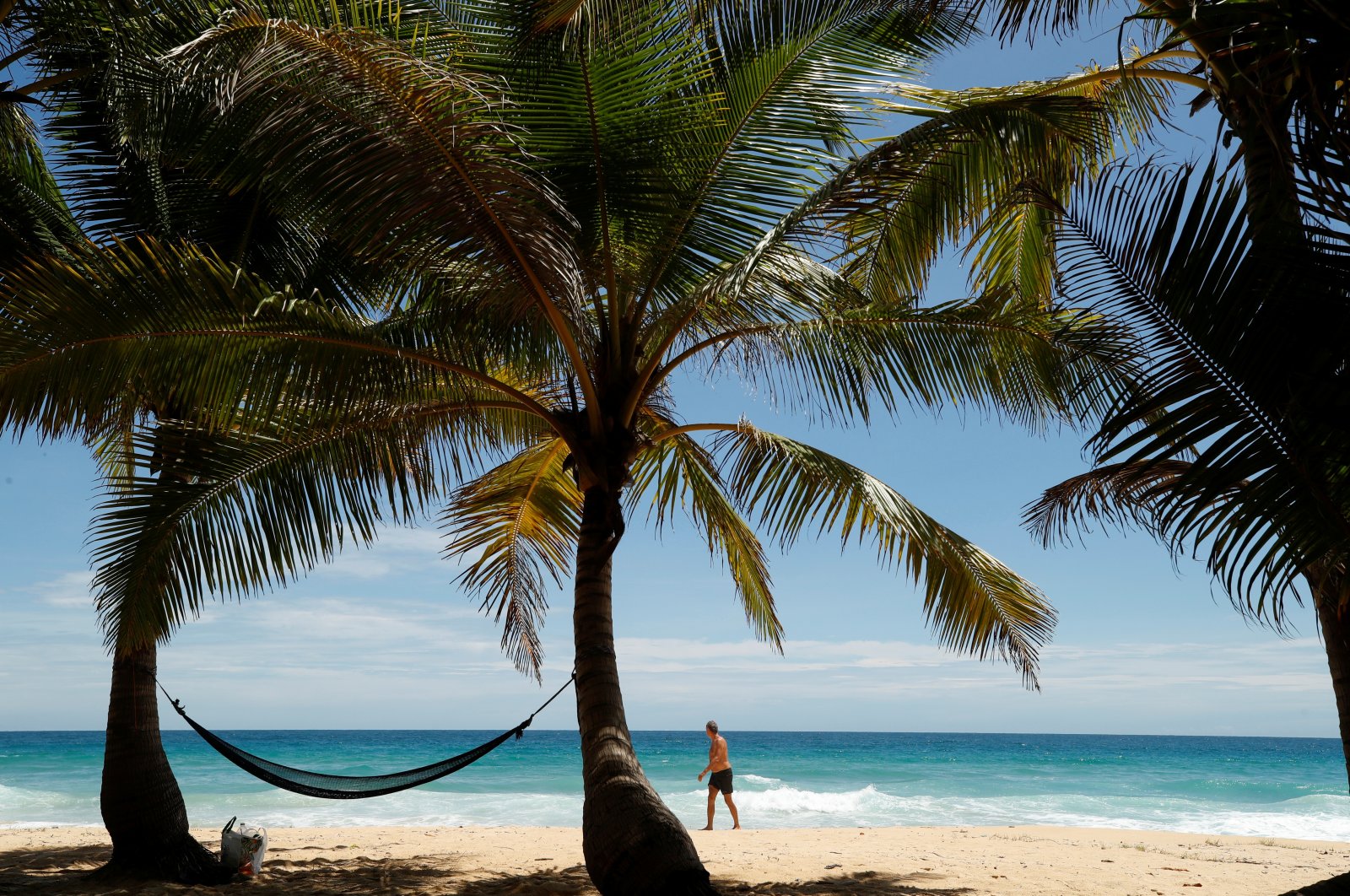 A man walks at Karon beach as Phuket gets ready to open to overseas tourists from July 1 allowing fully vaccinated foreigners to visit the resort island without quarantine, Phuket, Thailand, June 29, 2021. (Reuters Photo)
by ASSOCIATED PRESS
Jul 01, 2021 10:13 am

Thailand's popular resort island of Phuket opened to to fully vaccinated foreigners from lower-risk countries Thursday as the country attempts to revive its tourism industry battered by the COVID-19 pandemic.

As the first flight arrived, airport fire trucks blasted their water canons to form an arch over the Etihad jet from Abu Dhabi as it taxied to its gate.

Leaving the airport, Frenchman Bruno Souillard said he had been dreaming for a year of returning to Thailand and jumped at the opportunity.

The so-called “Phuket sandbox” program comes as coronavirus infections are surging in Thailand, including a significant number of cases of the delta variant, and many have questioned if it's too early to woo tourists back, and whether they'll come in significant numbers in any case due to the restrictions they'll still face.

But the number of new cases on the island itself is extremely low, in the single digits daily, and more than 70% of its residents are fully vaccinated. The government is gambling that travelers will be willing to put up with coronavirus-related regulations for the opportunity for a beach holiday after being cooped up in their home countries for months.

Before the pandemic, the tourism sector made up some 20% of Thailand's economy, and 95% of Phuket's income.

The resort island off the southern coast saw fewer than a half million visitors in the first five months, and almost no foreigners, compared to more than 3 million during the same period last year including some 2 million foreigners.

In a nod to the importance of the “sandbox” plan, Prime Minister Prayuth Chan-ocha flew to Phuket to be on hand in person for the launch.

Last-minute hitches in some of the program details and cautions from authorities that if cases start to rise on the island more restrictions may be needed – or it may have to be shut down entirely – meant some cancelations before it even began. Fewer than 250 international travelers were expected on the first day compared to the initial target of 1,500.

But as the kinks are worked out and people report their first-hand experiences, authorities are hopeful for a steady increase in the numbers. From July 1-15, there are currently 1,101 hotel bookings for a total of 13,116 room overnights.

Travelers to other parts of Thailand are subject to a strict 14-day hotel room quarantine, but under the sandbox plan, visitors to Phuket will be allowed to roam the entire island – the country's largest – where they can lounge on the white beaches, jet ski and enjoy evenings eating out in restaurants, although clubs and bars remain closed.

Only visitors from countries considered no higher than “low” or “medium” risk – a list currently including most of Europe and the Mideast, the U.S., Canada, Britain, Australia and New Zealand – are permitted, and they must fly in directly to Phuket, though plans are in the works to allow carefully controlled transfers through Bangkok’s airport.

Following the inaugural flight from Abu Dhabi, passengers were expected to arrive later Thursday from Qatar, Israel and Singapore.

Adult foreign visitors must provide proof of two vaccinations, a negative COVID-19 test no more than 72 hours before departure, and proof of an insurance policy that covers treatment for the virus of at least $100,000, among other things. Once on the island, they have to follow mask and distancing regulations and take three COVID-19 tests at their own expense – about $300 total – and show negative results.

After 14 days, visitors can travel elsewhere in Thailand.