Turkey’s 'football fever' and how it represents cultural values 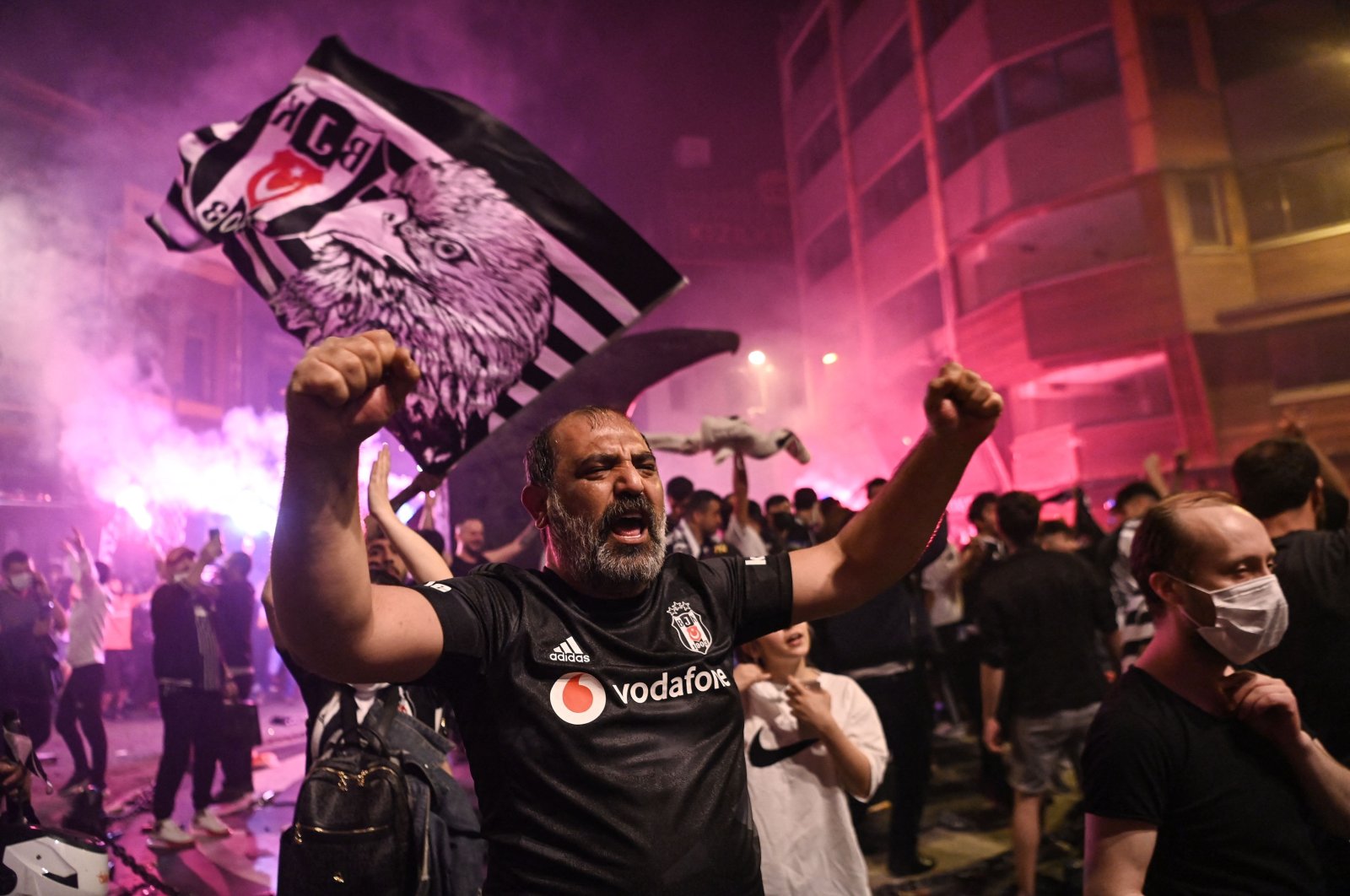 Smoke rises from flares as Beşiktaş' fans celebrate after winning the Turkish Super League Championship after the last match of the season on late May 15, 2021 at Beşiktaş district in Istanbul. (AFP Photo)
by Leyla Yvonne Ergil May 17, 2021 12:20 pm
Edited By Yasemin Nicola Sakay
RECOMMENDED

No one can argue that the sport of football, aka soccer, is not only the most popular and competitive sport in the country but for many it is deeply associated with their cultural value. Many are obsessed with their teams, which connect them to certain characteristics and areas of Turkey, thus representing so much more than top-bill players and the combination of colors they wear.

Many may have been surprised to see herds of people flock to the streets despite the nationwide COVID-19 lockdown to cheer for their beloved Beşiktaş, which secured the championship title Saturday night after a tight race between the top three teams in Istanbul that also happen to be archrivals. For those foreign newcomers witnessing the fanfare on the streets, trust me, this was nothing compared to the celebrations that usually transpire and what could have been if not for the curfew. Year after year when the season’s victor is determined, the team’s fans head straight outside to chant and exclaim their love for their favorite football team. If not on foot, then fans will pile into cars and will honk their horns incessantly as a sign of celebration. In Turkey, this traditional annual celebration at the end of the football season is truly intense, if not intimidating, but is par for the course and is quite telling of some of Turkey’s most prized values.

When I first moved to Istanbul 15 years ago, my father, a native Turk who had spent much of his life in the U.S., gifted me a season card to watch Beşiktaş play in the team’s famous home stadium, which sits upon a hill in Maçka overlooking Dolmabahçe Palace, the Bosporus Strait and the continent of Asia situated on the opposing side. While my father’s family typically supported Fenerbahçe as the team is named after his neighborhood, his friends who like him hailed from Istanbul’s French ecole, in other words, the handful of historical high schools which taught exclusively in the language, tended to be Galatasaray supporters. For me, he figured, a Beşiktaş season pass was as good as any. After all, the stadium was located close to my newly adopted neighborhood of Cihangir and he has a group of students that were more than willing to have me tag along. The reason behind this intriguing and exhausting gift, in which I would go to every Beşiktaş home game for an entire season, was as he said, “to truly learn about Turkish values.” I went to every game I could, without fail and solely of my own volition and my father was absolutely right, I learned in leaps and bounds about Turkish culture.

It turned out this gift would give me invaluable insight into what Turks are like, their values and their virtues. The reasons my father chose to purchase a season ticket to Beşiktaş stadium for me, in particular, are multifold. Beşiktaş is known for its strong fanbase and the location of the stadium was just a walk away from my home and through a bustling fish market, which is surrounded by outdoor fish restaurants where fans would gather before the game. As a language teacher, my father also had a group of students that would meet up every fortnight to catch the at-home games and luckily they welcomed me with open arms into their group. In addition to enjoying spectacular pre-game fish dinners, equipped with songs about the team, together we would march along the coastal road joined by chanting crowds to make our way to the stadium.

Beşiktaş has a fanbase that is referred to as Çarşı, in reference to the aforementioned fish market, that is as endearing as it is intimidating. The die-hard fans make their way up to the top of the stadium from where they commandeer all of the cheering to be followed by spectators’ stadium-wide. Furthermore, they would light up torches, which made the area of the bleachers they commandeered seemingly ravaged by flames. They are a notoriously out-of-control bunch, however as a fellow female fan, I was honestly never personally affected, just a bit terrified, to say the least. I chalked it all up to just being part of the excitement but made sure I took part in all of the chants and Mexican waves as you wouldn’t want to get on their wrong side. If you weren’t chanting they could literally point you out, so you had to be on the ball! Thus, I honestly ended up spending a majority of the games watching this crowd of fanatic fans rather than the actual pitch.

Although the seats looked quite comfortable, I never got the chance to really test them out. During the match, everyone stood on their chairs with one foot on one seat and the other on the seat next to it for balance. So, even to stand you only had a tiny area to put your feet on, which would be touching your neighbors and if you wanted to actually sit down, that was near impossible unless you had an obvious impediment. That being said, the stadium has since been renovated and here’s to hoping there is more decorum these days. Nonetheless, it didn’t really matter as the excitement at the games was so palpable, everyone would have been on the tip of their toes regardless.

When goals were scored all of the fans jumped and hugged one another except for me and the other fellow female fans scattered in between. There would be a sea of people hugging and jumping, and inevitable falling, and then myself and the vastly outnumbered few women around me that would be left standing. Our eye contact and greetings are something I will never forget. I will also never forget how fun it was to make my way to the coffee stand at the top of the stairs. Not only was it wonderfully comforting to hold a warm cup of coffee, but the crowds would part as I walked up the stairs as fellow onlookers would yell out in Turkish to forewarn that a woman was passing. I truly never felt safer in the care of my fellow Turkish football fans.

A few of the lessons I learned on Turkish values:

Hospitality: Even though I didn’t know the tightly-knit groups of friends that would meet up and go to the games together, I was welcomed with open arms and made long-lasting friendships from the experience.

Generosity: From the friends who met up at fish restaurants before the game to the vendor that sold the coffee, I don’t believe that I ever paid a penny. The bill would be snatched up by someone and when I begged to pay, it was almost as if they were insulted. Noticing I was a foreigner, the coffee vendor literally handed me free coffee and tea all season for being a “guest.”

Loyalty: Turkish fans are loyal to a fault and whether their team won or lost, they were there and chanting for them until the very end. There were certainly ups and downs as this was the season in which Beşiktaş suffered the worst loss in Champions League history to Liverpool, a team they in fact beat just two weeks earlier.